Israel: Gazans can leave via West Bank but can't return for a year

The measures would mark a shift on existing rules for departures, but critics say the year ban on returning would restrict Gazan lives even more The Israeli government is planning to ease restrictions and allow Gaza residents to leave the Strip via the West Bank on the condition that they do not return for at least a year.

According to public document from the office of the Coordinator of Government Activity in the Territories, seen by Israeli daily Haaretz, Palestinians from Gaza will be escorted to the crossing between the West Bank and Jordan either with an Israeli military escort or an official of the Palestinian Authority.

"As a rule, any resident of the Gaza Strip [who] gives a written commitment not to return via Israel and the West Bank for one year ... will be approved, subject to a detailed security assessment,” the office said in a statement originally issued in February.

If introduced, the measures would mark a shift on existing rules that allow Gaza residents to leave via the West Bank. An average of 100 weekly permits are issued a week, largely for those with medical conditions or those going to study abroad.

Israeli journalist Amira Hass said: "Since 1997, Israel has not permitted Gazans to travel abroad and return via the Allenby border crossing, ie through Israeli territory and the West Bank, with very few exceptions,” Hass wrote.

“Thus, the Rafah border crossing became the only departure gate for Gazans to go abroad. Theoretically, Israel is now increasing the number of Gazans who will be able to travel abroad.

"On the other hand, the condition that one must remain outside the country for at least a year is a strong deterrent, since there is hardly any possibility of returning via Egypt.”

Omar Nazzal, a member of the Palestinian Journalist Syndicate and former spokesperson for the popular committee to end the siege on Gaza, said that the measures should not be considered positive or a "humanitarian favour" to Gaza's people.

"In reality it serves to restrict their lives even more," Nazzal told Middle East Eye.

"Gaza is one of the world’s most densely populated areas. Decreasing the population density is in the interest of all those against the Palestinian people, such as Egypt and Israel, in order to make their control over the Strip easier."

"It is an attempt to make the lives of Palestinians from Gaza who have to leave temporarily and come back much harder, by denying them entry for one year," he added.

Even then, Nazzal said, it was not guaranteed that those who agree to that condition would be allowed back in after the specified time period.

The Gaza Strip has been blockaded by Israel and Egypt since the summer of 2007. 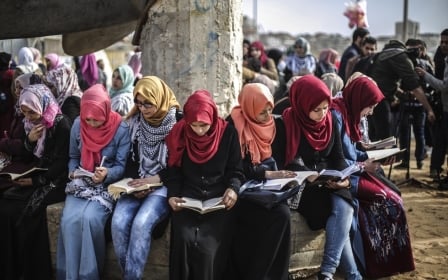 Occupation
Gaza under siege: The conditions of slavery
Ghada Ageel