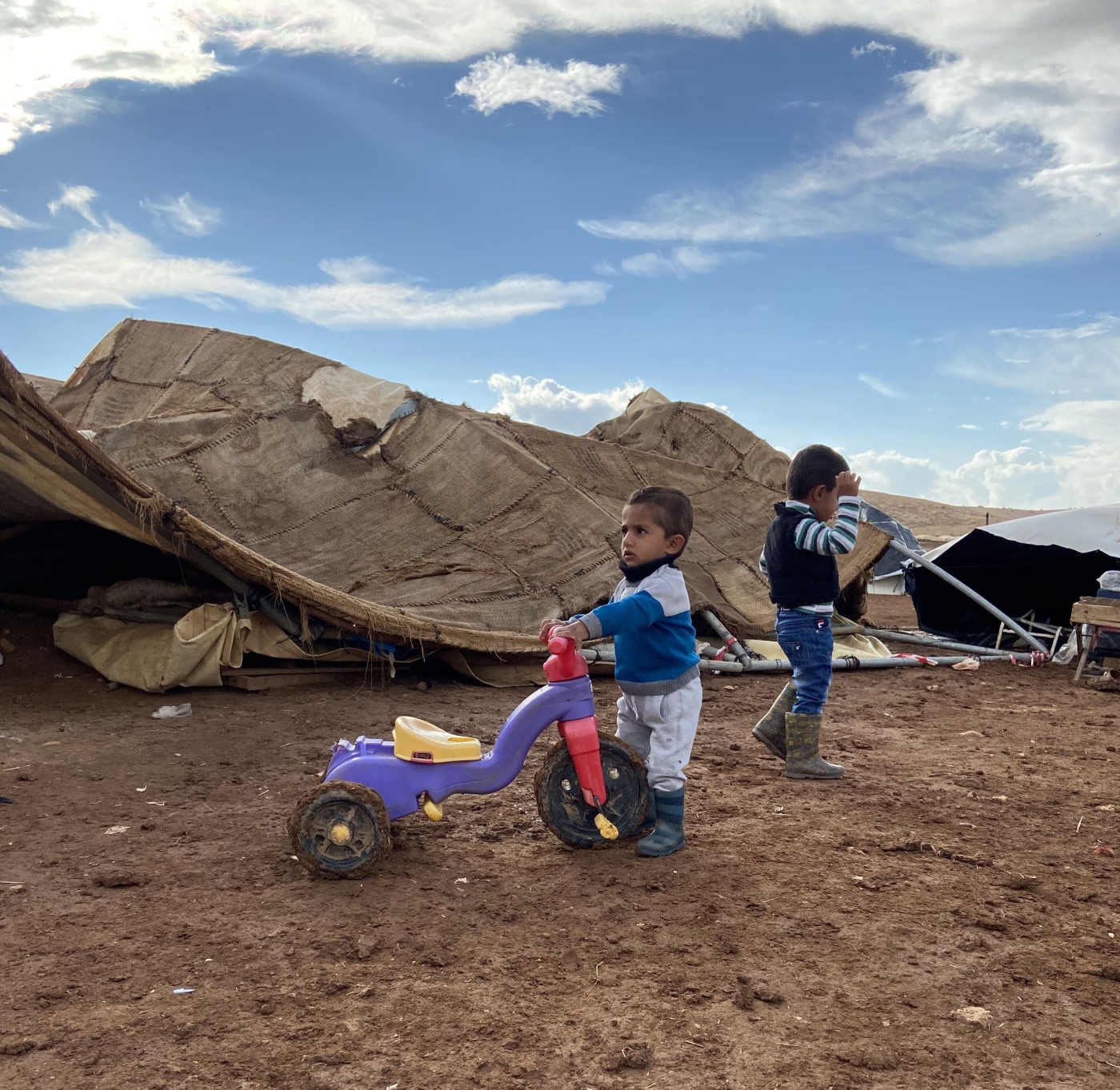 On the evening of Wednesday 4 November, a cold, bitter rain poured down over Palestinian towns and villages in the occupied West Bank, as the first storm of the winter season rolled through the region.

As hundreds of thousands of Palestinians in the West Bank took cover from the weather in their homes, 11 families in the northern Jordan Valley were left to sleep under the open sky, with nothing but a small tarpaulin for cover.

'As the attention is focused on US Election 2020, Israel chose this evening to commit another crime/cover it up: to demolish 70 Palestinian structures, including homes'

Just hours before the cold front ripped through the West Bank, Israeli forces had demolished the Bedouin hamlet of Khirbet Humsa, which is home to 74 Palestinians, including 41 children, one as young as three months old.

“We were about to have lunch when bulldozers suddenly arrived, at 11 in the morning. Military jeeps and soldiers, they surrounded us,” Aisha Abu Awad, 56, told Middle East Eye as she cradled her three-month-old granddaughter Hadeel.

The child wailed as a cold wind blew through their makeshift tent, hastily erected the previous night to protect them from the rain.

“Then they told us to start evacuating, and they began emptying all of our belongings outside,” she said, adding that the military jeeps had arrived along with a busload of workers from the Israeli Civil Administration, which is responsible for enforcing the Israeli government’s policies, including home demolitions, in the West Bank.

As the armed soldiers and Civil Administration workers emptied her belongings outside her family’s home, into the soil of a hilltop, Abu Awad said she was “humiliated”.

“We stood there and we cried, but what could we do?” she asked, as she described watching bulldozers tear down her home, her family’s livestock pen, and their water tanks, as she stood out in the rain.

Meanwhile, Palestinian Prime Minister Mohammad Shtayyeh accused Israel of timing the demolition for election day in the United States, when the world was distracted.

“As the attention is focused on #USElection2020, Israel chose this evening to commit another crime/ cover it up: to demolish 70 Palestinian structures, incl. homes,” he wrote on Twitter.

B’Tselem added that Israeli forces also destroyed more than 30 tonnes of fodder for livestock, and confiscated a vehicle and two tractors belonging to three of the residents.

In the wake of the demolition, residents of Khirbet Humsa, also known as Humsa al-Buqai’a and Humsa al-Fuqa, with the help of a group of local activists in the Jordan Valley, were able to erect makeshift tents to sleep under temporarily, and protect whatever they could salvage of their precious belongings with plastic covers to shield from the rain.

On the morning of 4 November, as activists, along with local ministers and government officials, surveyed the damage, Ayman Gharib, an activist with the Popular Resistance Committees, described the destruction as “the worst demolition campaign we’ve seen in decades”.

'They [Israel] did not even take into consideration the humanitarian side, that there are babies, children, elderly people and women who have spent their night homeless, under the rain'

“They completely uprooted everything,” Gharib said, “from the portable bathrooms, kitchen appliances, their homes, their livestock pens...  basically anything that these people need to live and survive.

“They [Israel] did not even take into consideration the humanitarian side, that there are babies, children, elderly people and women who have spent their night homeless, under the rain,” he said. “The same goes for the animals, the sheep and cattle, who also spent the night under the rain.”

Gharib pointed to the fact that residents’ homes were demolished by Israeli forces under the pretext that they were living in a “military training” and “firing” zone, designated as such by Israel in 1972.

For decades since, the residents of Khirbet Humsa and dozens of other clusters of Bedouin encampments have been subject to demolitions and forcible evacuations from their homes during military training exercises, which take place across vast areas of land in the Jordan Valley. But activists like Gharib say that evacuations and demolitions under the pretext of living in military training zones is a pretence for the Israeli government’s real plans in the area: annexation and settlement expansion.

“Israel claims these are closed military zones, and are state lands, therefore Palestinians cannot live here,” he said. “But those restrictions only apply to Palestinians.

“If a settler were to come here, and decide to set up an outpost here, it would cease to be a military training zone,” Gharib said, naming instances in which Israeli settlers set up illegal outposts on land with similar designations in the Jordan Valley.

Israel’s strategy in the Jordan Valley, which has been slated by Prime Minister Benjamin Netanyahu for annexation, is “well-known,” Gharib said.

“There is a pattern of behaviour, where Israel confiscates Palestinian land, designates it as state land or military zones, eventually hands it over to the settlers, and then uses the settler presence as a pretext for annexation.”

This has been a record-breaking year in terms of Israeli demolitions of Palestinian homes in the occupied territories, even in the midst of the Covid-19 pandemic. The demolition of Khirbet Humsa has pushed those already devastatingly high numbers over the edge.

According to the United Nations office for Humanitarian Affairs (OCHA) in the occupied Palestinian territories, the demolition of Khirbet Humsa left three-quarters of the community’s population homeless, making it the “largest forced displacement incident” in over four years.

So far in 2020, the OCHA reported, Israeli forces have destroyed 689 structures across the West Bank and East Jerusalem, more than in any full year since 2016. The demolitions this year have left an estimated 869 Palestinians homeless.

“The lack of Israeli-issued building permits is typically cited as a reason, even though, due to the restrictive and discriminatory planning regime, Palestinians can almost never obtain such permits. Demolitions are a key means of creating an environment designed to coerce Palestinians to leave their homes,” the OCHA said.

The circumstances surrounding the residents in Khirbet Humsa are no different from those faced by thousands of other Palestinians living in "Area C" of the West Bank, which is under full Israeli security and civilian control.

'When Israel came to destroy these tents, they sent a message to the Palestinians here, that "We, and your Arab brothers, are working against you"'

In addition to being located in a closed military zone, the land on which Khirbet Humsa is situated was designated as Area C under the Oslo Accords, therefore rendering it uninhabitable for the Palestinians who own the deeds to the land in the area, many of whom reside in the nearby city of Tubas.

While the Bedouin living on Khirbet Humsa are not the owners of the land, they have received permission over the years to inhabit it and use it for their livestock, their main source of income.

“We have a simple life: we breed sheep, and make milk and cheese for a living,” Aisha Abu Awad told MEE. “We have been living here for years, but they [Israel] say the land is not for Palestinians.

“We are helpless against the occupation,” she continued. “And the world is doing nothing to stop them.”

The Jordan Valley has been at the centre of Israel’s plans for annexation of Palestinian territories in recent months, as Netanyahu and his right-wing supporters have advocated the takeover of the valley, which boasts one of the largest water reserves in the West Bank and whose land is extremely fertile for farming and agriculture.

Israel’s plans to annex the Jordan Valley and other large areas of the West Bank have met with local and international protest, as the unilateral application of Israeli sovereignty to occupied Palestinian land would constitute a grave violation of international law.

In August, the United Arab Emirates declared that it was normalising relations with Israel, and that in exchange, Israel would stop annexation.

Palestinian activists and rights groups, however, quickly pointed to the fact that de facto annexation on the ground, in the form of home demolitions and land seizures, has continued since the normalisation deal, and in some cases it has increased.

“They attempted to justify the normalisation by claiming that this is their attempt to prevent annexation,” Gharib said. “However, in reality the annexation continues, settlements continue, settlers’ violations and assaults continue.

“Israel continues to assault our people,” Gharib continued, “and with normalisation, Israel took the green light to destroy, demolish and annex quietly.

“All of this is an attempt to expel Palestinian families from their lands,” he said. “And yesterday, when Israel came to destroy these tents, they sent a message to the Palestinians here, that ‘We, and your Arab brothers, are working against you.’” 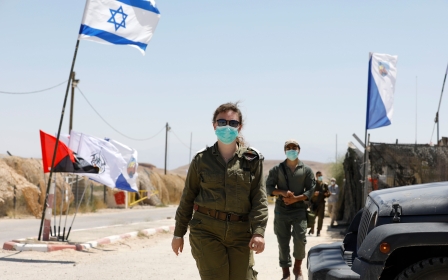 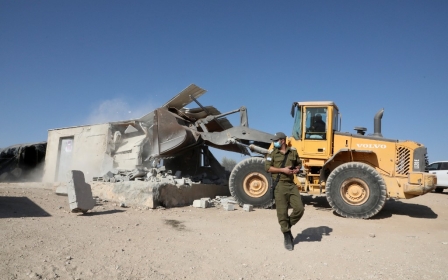