Villagers thrown out of their homes as Israel tests its weapons. This year's commemoration of the events of 1948 sees renewed displacement 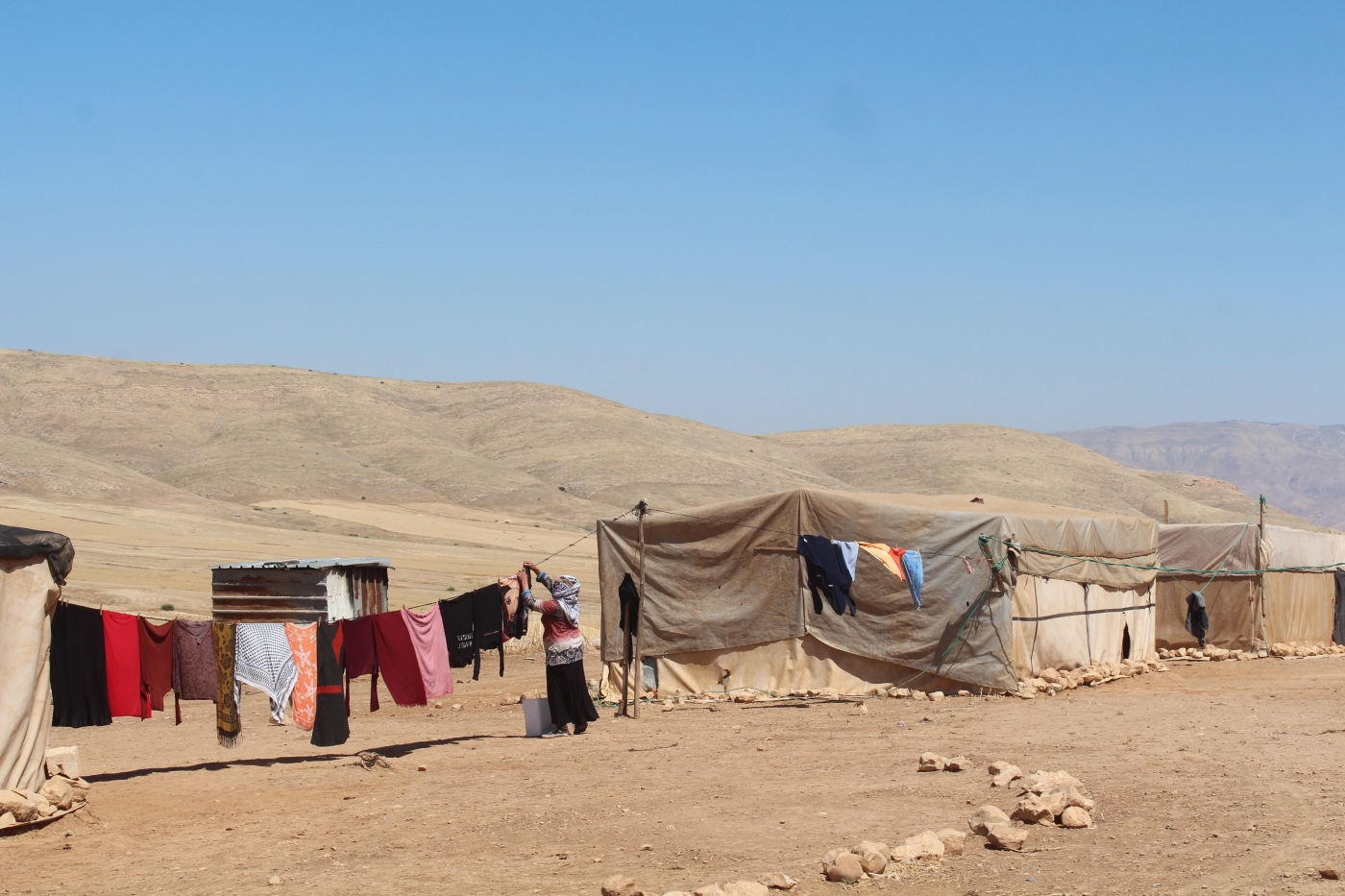 On the floor of a residential tent in Khirbet Humsa al-Fawqa, toys lay scattered.

Playtime for the village's children was cut short when the Israeli military declared the area a closed military zone and forced the Palestinian community to evacuate their homes in the early hours of Sunday.

Following an eviction order four days earlier, the 98 residents were prevented from accessing their homes for three days. Throughout May and June, they will be evicted 12 times for three days each, the army informed them.

Palestinians were told their homes would be within range of tank shells while the Israeli army uses the area to carry out military drills.

On the morning of the eviction, father of five Mohammed Sulaiman Abu Qabbash left his children at a nearby community and hurried back in an attempt to guard the tents and sheep. The 35-year-old paced back and forth, nervously monitoring the area. He expected Israeli soldiers to arrive soon and force him out.

"We will sleep under the sky for the next three days. We have no other choice. We cannot say 'no' to such power," he told Middle East Eye.

If the community refuses to evacuate when commanded, it risks forced removal, expropriation of their livestock and retroactive fines.

Under international law, driving residents of an occupied territory from their homes is considered forcible transfer of protected persons, which constitutes a war crime. But residents of Palestinian communities in the Jordan Valley are no strangers to such disruptive Israeli policies.

The valley, which is a fertile strip of land running west along the Jordan River, is home to about 65,000 Palestinians.

Since 1967, when the Israeli army occupied the West Bank, Israel has transferred at least 11,000 of its Jewish citizens to the Jordan Valley. Some of the settlements in which they live were built almost entirely on private Palestinian land.

We will sleep under the sky for the next three days. We have no other choice, we cannot say 'no' to such power

About 46 percent of the Jordan Valley has been declared a closed military zone by the Israeli army since the occupation began.

Approximately 6,200 Palestinians live in 38 communities in places earmarked for military use and have had to obtain permission from the Israeli authorities to enter and live in their communities.

In violation of international law, the Israeli army not only temporarily displaces the communities on a regular basis but also demolishes homes and infrastructure from time to time.

Besides undergoing temporary displacement, the Palestinian families living there face a myriad restrictions on access to resources and services. Meanwhile, Israel's seizure of land has confiscated natural resources for the benefit of settlers.

Fasting amid displacement and temperatures that have reached 40 degree Celsius is doubly difficult this Ramadan, said Khadija Abu Qabbash as she prepared to leave.

The pregnant mother of five washed a pile of clothes by hand in the morning. Her 15-year-old daughter, Deema, hastily helped her to hang the clothes to dry before Israeli soldiers arrived. 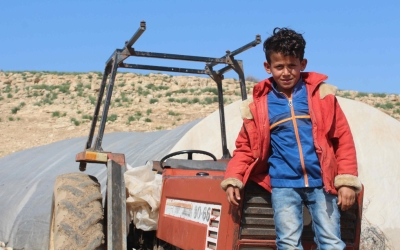 "We escorted the children out this morning, and now the car is back to take us," she told MEE with tears streaming down her face. "I won't be able to cook anything for iftar," she added, referring to the meal to break the Ramadan fast at sunset. "We'll have to make do with canned food."

Israeli forces evict the families of Khirbet Humsa al-Fawqa on a regular basis. The evictions, however, usually take place during the day, with the residents allowed to return in the evening.

"I don't know whether they are actually carrying out a military drill. Sometimes they evict us and do nothing. They aim to coerce us into leaving the area for good," Khadija said.

Israel's actions in the Jordan Valley have been well-documented by human rights groups and local NGOs, which assess that the objective of such measures is to drive out Palestinians and to stifle their development in the area.

Israeli politicians have made it clear on several occasions that the highly strategic Jordan Valley would remain under their control in any eventuality, even before Prime Minister Benjamin Netanyahu's recent comments on his plans to annex areas of the occupied West Bank.

In 2013, peace negotiations were rejected by Israel when it was suggested that it cede some control of the valley.

Commenting on Sunday's evacuation of Khirbet Humsa al-Fawqa, Walid Assaf, head of the Palestinian Authority's National Committee to Resist the Wall and Settlements, said in a statement that there were efforts through lawyers to stop the temporary eviction, but the Israeli military order could not be challenged.

"Just as they forced Palestinians from their homes in 1948, today they are doing the same. We will not give up," added Khadija, referencing the Nakba, the ethnic cleansing of historic Palestine by Zionist militias 71 years ago, commemorated annually on 15 May.

'They do not want Palestinians here'

Primarily a shepherding community, the families of Khirbet Humsa al-Fawqa wake at 3am to milk their sheep and prepare cheese ahead of their journey to the markets in the nearby city of Tubas.

Harb Abu Qabbash, 40, told MEE that each family owns around 300 sheep. Since it is difficult to transport them out of the area, many of the younger sheep stay behind when the Palestinians are evacuated and often die of hunger with no one to attend to them.

With the military exercises taking place, thousands of hectares of barley and wheat are under threat of being burned, he added. According to Harb, this happens regularly.

"Our biggest fear is that a shell lands on one of our tents. If that happens it would be catastrophic and we would lose everything," said Harb.

"The Israelis want to seize the area and empty it of its residents. They do not want Palestinians here.

"In 2005, they demolished our tents and infrastructure on the pretext that they were built without a permit. When we apply for permits, they do not issue them."

When not faced with evacuations, military exercises and demolitions, the Palestinians in the community struggle to obtain enough water for their needs under the Israeli occupation.

"Each family and their sheep use a total of two to three water tanks each day,” Harb said.

"Transporting the tank to the community takes two hours. There is a water well five minutes away from here, but the Israeli army has barred us from using it and designated it for Israeli settler use only." 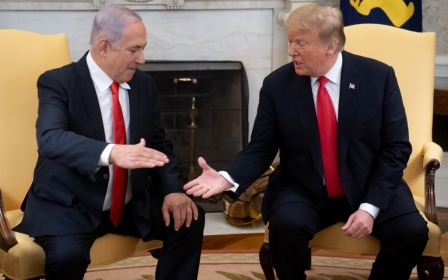 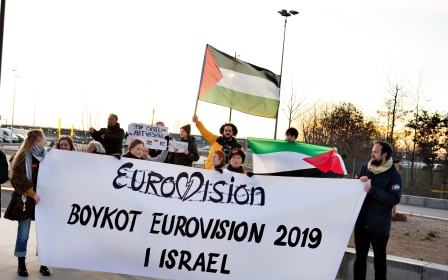