Protesters gather in New York and Washington to mark the forced expulsion of Palestinians 74 years ago, and mourn slain Al Jazeera journalist 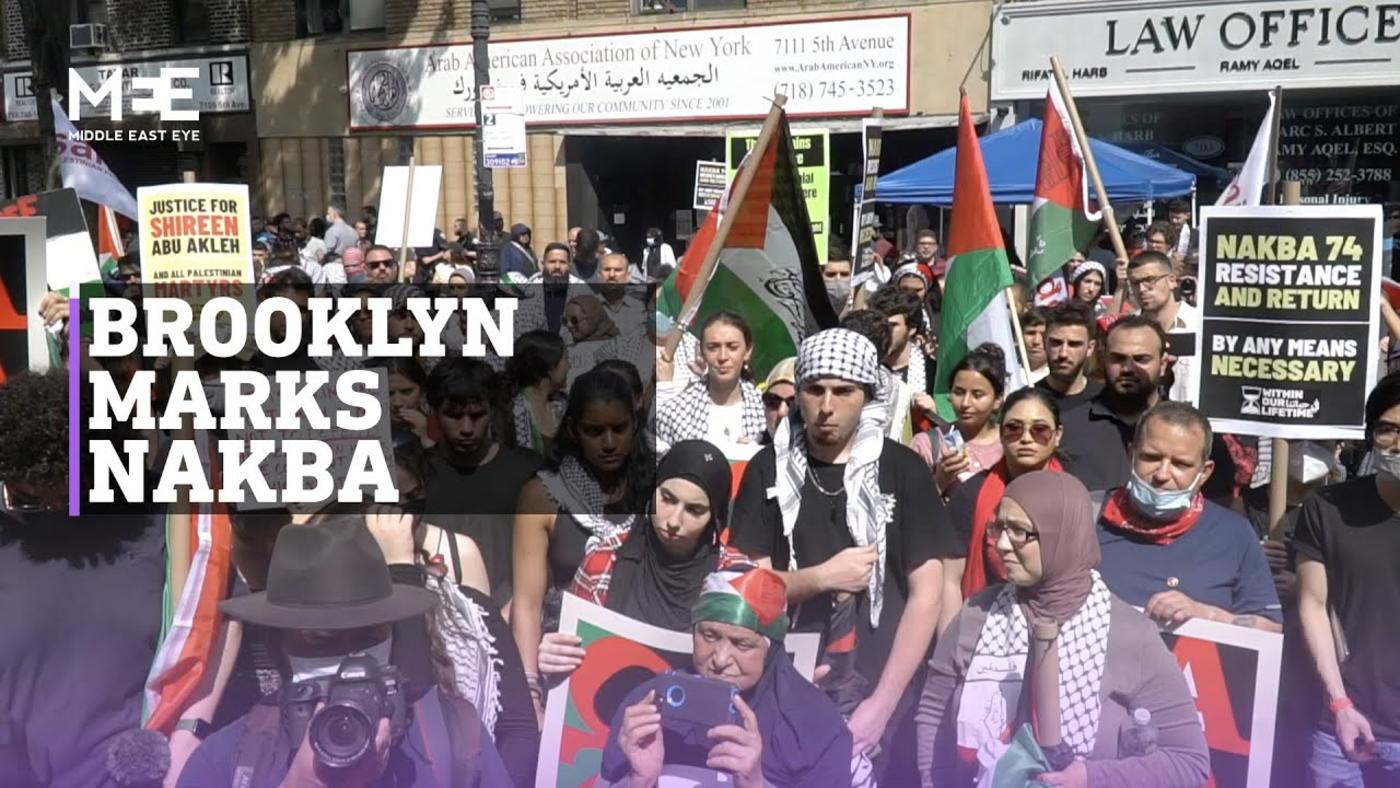 Thousands of protesters rallied across the United States on Sunday to raise awareness about the Nakba, or catastrophe, in reference to the ethnic cleansing of hundreds of thousands of Palestinians at the hands of Zionist paramilitaries in 1948.

The annual demonstrations are usually a melancholic affair, but demonstrations in New York City and Washington were layered with additional tragedy in the aftermath of the death of Palestinian veteran journalist Shireen Abu Akleh, who was shot by Israeli forces last week.

In New York, around 2,000 people from all walks of life packed the streets of Bay Ridge, a predominantly Arab neighbourhood in Brooklyn. Protesters gathered in large numbers, draped in keffiyehs, holding a multitude of signs and waving the Palestinian flag.

"Palestinians have been resisting for 74 years. And we have a radical legacy of resistance and we need to make sure that that radical legacy is upheld and nurtured by the youth here, by the older generation," Tamar, an organiser with the Palestinian Youth Movement (PYM), told Middle East Eye.

Lema Majdalawieh, a 21-year-old Palestinian student in New York, recalled how her grandparents had been forced out of Yafa in 1948.

"What Palestine means to me is that we say 'Ana dami Falastini' ('my blood is Palestine') all the time, but it's definitely in my blood. I always had that feeling to research and see what was happening in my country and I definitely feel like it's a part of me," she told MEE, grinning as her Palestinian flag gently unfurled against her face.

"It's a very important time right now and it's going to lead to liberation. Honestly, I always feel liberated regardless of the situation because I am from Palestine and it’s always going to feel free to me."

Josiah Morgan attended the rally wearing the colours of the Palestine flag.

He explained that as a Black, African-American man, he had an intimate understanding of oppression.

"We feel the same pain. We have gone through the same struggles. We’ve both felt what it is to be attacked."

The Palestinian Youth Movement said they had organised, in partnership with several groups including American Muslims for Palestine (AMP), a total of 15 protests in cities all over the US and Canada.

'Political change comes from the people'

In Washington, hundreds gathered at the Lincoln Memorial, just blocks away from the State Department and in view of the US Capitol building.

Protesters stood holding banners reading "Free Palestine" and "Stop Ethnic Cleansing" at the Reflecting Pool, the site where Martin Luther King Jr gave his "I Have A Dream" speech during the Civil Rights Movement nearly 50 years ago.

'It's my family's suffering. I'm here because of that'

"It's my family's suffering. I'm here because of that. Seventy years ago, my dad was in Haifa. And he was expelled out of his house because of the Zionist terrorist groups and militias who kicked out 750,000 Palestinian families," Ahmad Krayem told MEE.

Krayem was walking around the perimeter of the rally waving a Palestinian flag attached to a pole as tall as he was.

"And since then, we are roaming the world in refugee status because of what happened on that day."

Krayem said that for him, the continued protests in the US in support of the Palestinian cause are not meant to change the government's policy towards Israel, but to raise awareness among the American people.

"Governments know the truth and they don't care," Krayem said.

"If this is really a democratic country, then changes come from the people, so if we educate the people, we might actually have a political change that might affect us."

For several decades, public opinion among ordinary Americans has largely been in favour of Israel. However, in the weeks and months following Israel's offensive on Gaza last year - which killed more than 260 Palestinians - a number of polls have suggested that more Americans are becoming critical of the close US ally.

A May 2021 poll showed that a majority of Americans opposed unrestricted aid to Israel, while another survey released in August that year found that only eight percent of Democratic voters blame Palestinians for the offensive on Gaza.

The two-hour-long rally in New York followed a vigil for Abu Akleh.

Posters calling for justice lined up a table behind the centre stage of the rally. Candles and flowers rested on top of keffiyehs along with a brown press vest to honour Abu Akleh.

Lucinda Greene was holding a poster that said, "You can't kill the truth." She explained that hearing of Abu Akleh's death was heartbreaking for her because her mother is a journalist. 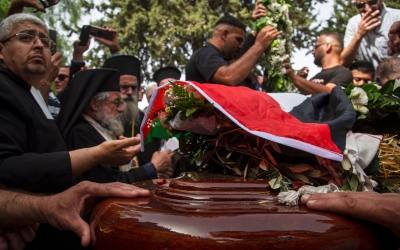 "You know, it's funny because they killed her so she could no longer expose their cruelty. But by killing her, she exposed their cruelty," she said.

"I am not Palestinian. I am not Arab. I am not Muslim. I'm just a white [Christian] woman from Connecticut. And I know there is not much I can say… but what happened to Shireen was tragic. No journalist deserves to be killed telling the truth. Especially one that is Palestinian, who was just fighting for a free Palestine in her own way."

At the rally in Washington, organisers set up a small memorial and casket for Abu Akleh, where people came and set down flowers and some offered up prayers for the slain journalist, who was a Palestinian Christian.

The Biden administration has condemned Abu Akleh's killing and called for an investigation. However, protesters have called out the White House for using vague language to describe what happened.

After photos and videos emerged last week showing Israeli soldiers beating and assaulting Palestinians who were carrying Abu Akleh's casket during the funeral procession, a State Department statement called the incident an "intrusion".

"If this happened to someone else, I mean, by now Congress would have passed resolutions, imposed sanctions and would have probably sent some humanitarian aid, too, but in this particular case, we're barely hearing the minimum in the statements coming out," Hanna Hanani, a Palestinian American from Virginia, told MEE.

Just like Abu Akleh's funeral in Jerusalem - which brought together thousands of Christians and Muslims, demonstrators from Muslim, Christian and Jewish backgrounds came together in New York and Washington to mourn the reporter's death.

"We'll continue to speak the truth because she spoke the truth right up until she was killed," Reverend Graylan Hagler, ​​minister for the Plymouth Congregational Church of Christ, said in a speech at the rally in Washington. 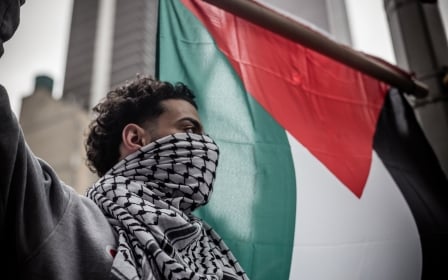 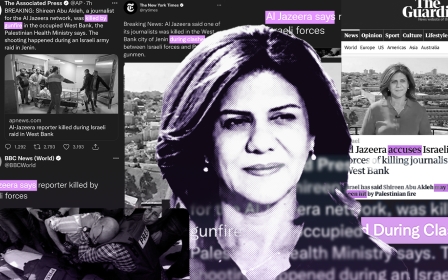 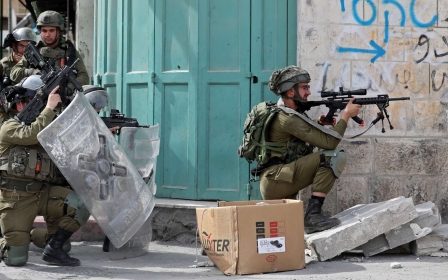