Israel-Palestine: US lawmakers speak up for Palestinian rights in Congress 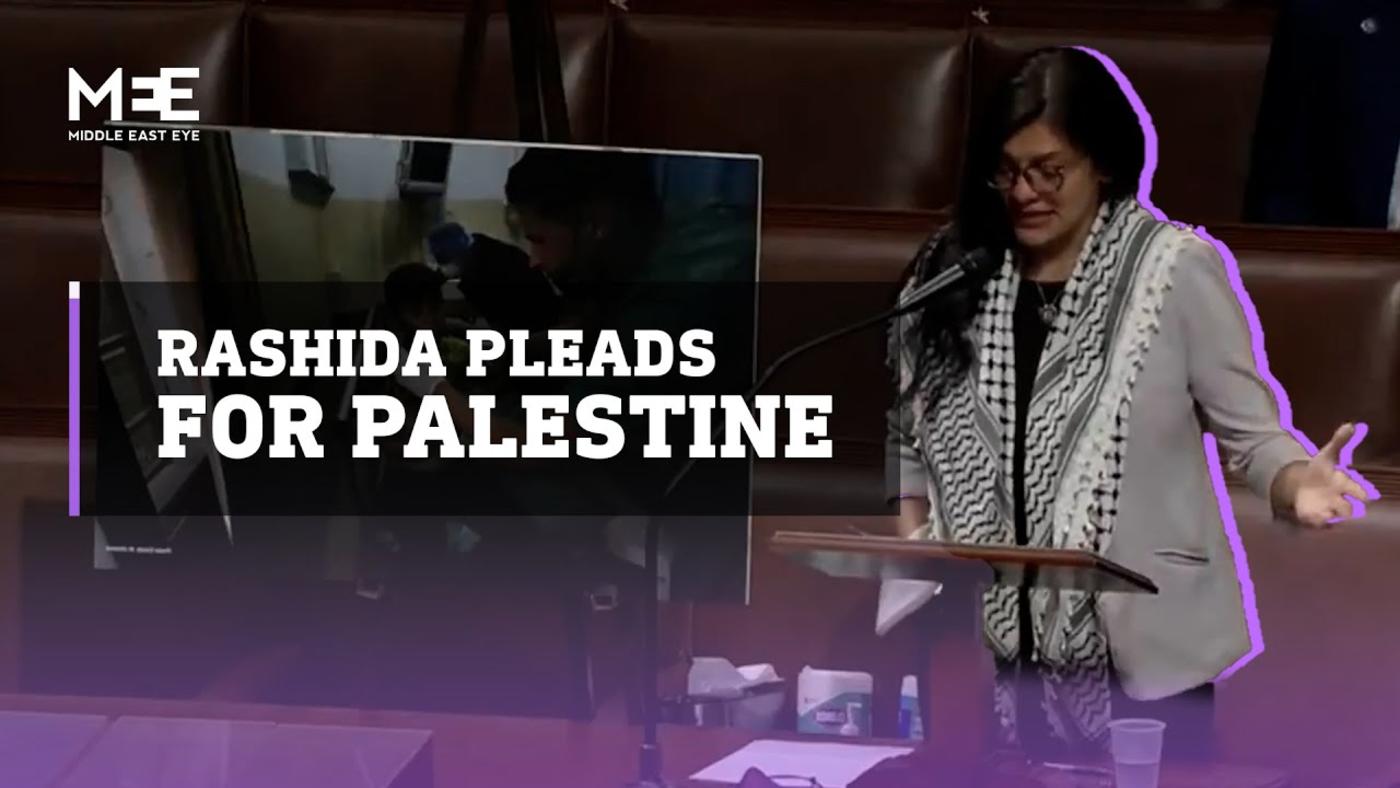 Several US Congress members spoke in support of Palestinian rights on the floor of the House of Representatives on Thursday, calling on President Joe Biden's administration to pursue a more even-handed approach to Israel and Palestine.

Congresswoman Rashida Tlaib slammed Biden's handling of the crisis in the Palestinian territories and Israel, urging US politicians to recognise Palestinians' humanity.

Draped with a keffiyeh and at times holding back tears, Tlaib delivered an impassioned speech in defence of Palestinian rights. "There has been absolutely no recognition of Palestinian humanity," Tlaib said. "If our own State Department can't even bring itself to acknowledge the killing of Palestinian children is wrong, well, I will say it for the millions of Americans who stand with me against the killing of innocent children, no matter their ethnicity, or faith."

The administration has expressed sympathy for all victims but failed to condemn Israeli air strikes against Palestinian civilians and civilian infrastructure, including residential towers.

'Not a conflict between two states'

The State Department, Pentagon and White House have all repeatedly voiced support for what they call "Israel's right to defend itself."

On Monday, State Department spokesperson Ned Price struggled to answer a question on whether Palestinians, too, have a right to self-defence.

US Secretary of Defense Lloyd Austin reiterated the same message on Wednesday in a phone call with his Israeli counterpart, Benny Gantz, according to a statement from the Pentagon.

"Secretary Austin conveyed the Department’s ironclad support for Israel’s legitimate right to defend itself and its people, and he strongly condemned the launching of rockets by Hamas and other terrorist groups that targeted Israeli civilians," Austin said.

Earlier on Thursday, Biden said Israel's air strikes on Gaza have not been a "significant over-reaction" to rocket attacks by Hamas. Israeli violence has killed more than 100 people, including children, in the besieged Palestinian enclave.

In her speech, Tlaib, who is of Palestinian descent, criticised Austin along with Biden and Secretary of State Tony Blinken.

"To read the statements from President Biden, Secretary Blinken, General Austin and leaders of both parties, you'd hardly know Palestinians existed at all," she said.

Speaking from the floor during the same session, Omar invoked Nakba, the forced displacement of hundreds of thousands of Palestinians that led to the establishment of the state of Israel, to contextualise the current crisis.

'To read the statements from President Biden... and leaders of both parties, you'd hardly know Palestinians existed at all'

"Now consider that 78 percent of their land was taken from them," she said of Palestinians after the founding of Israel. "Since then, 5.6 million Palestinians have been continually displaced from their homes in one of the largest among the lasting refugee crises in human history."

Omar said hope of a Palestinian state is slipping away because of Israel's policy of settlement expansion and displacing Palestinians.

"This is not a conflict between two states. This is not a civil war," the congresswoman said. "It is a conflict where one country, funded and supported by the United States government continues an illegal military occupation over another group of people."

She cited the recent Human Rights Watch report that concluded that Israel is guilty of practising apartheid against Palestinians.

"This is all to make way for illegal Israeli settlement outposts, designed to displace Palestinians from their homes and prevent a future Palestinian state."

The succession of speeches on the House floor in support of Palestinian rights on Thursday is a break from the unconditional support for Israel in Washington over the past decades. The shift is a reflection of increased awareness of Israeli abuses against Palestinian human rights in the progressive wing of the Democratic Party.

All the speakers during Thursday's sessions were Democrats.

Mark Pocan, a Wisconsin lawmaker who organised the session, denounced the Israeli occupation and likened the conditions separating Palestinians and Israelis to the apartheid system in South Africa.

"We must treat everyone in Israel and Palestine with equal respect and dignity. That's the US policy that we are speaking out for," Pocan said.

'Not about both sides,' AOC says

On Wednesday, 25 Democrats wrote a letter to Blinken, urging the US administration to apply "diplomatic pressure" on Israel to end the campaign of displacement and home demolitions in occupied Jerusalem. Efforts to force out Palestinian families from their homes in East Jerusalem's Sheikh Jarrah neighbourhood had spiked the tensions that led to the current crisis, which looks to be turning into an all-out war in Gaza.

"The United States must acknowledge its role in the injustice and human rights violations of Palestinians," Alexandria Ocasio-Cortez, one of the most prominent Democrats in Congress, said on Thursday. "This is not about both sides. This is about an imbalance of power."

Washington provides $3.8bn in military aid to Israel annually. Biden has dismissed proposals to condition assistance to Israel as "bizarre".

Congresswoman Cori Bush, a Black Lives Matter activist who unseated a centrist Democrat in Missouri last year, paid tribute to Bassem Masri, a Palestinian American who participated in racial justice protests after the killing of Michael Brown at the hands of a police officer in 2014.

"Palestinians know what state violence, militarised policing and occupation of their communities look like, and they live that reality of having to go through checkpoints while trying to live their lives," Bush said.

Joaquin Castro, a Texas Democrat, voiced support for creating a Palestinian state and thanked Tlaib for her testimony.

"I think part of what's been missing in this Congress is hearing from Palestinian voices," he said.