An Israeli police officer has been placed on 'immediate leave' after a video released on Thursday showed he had head-butted and brutally beaten a Palestinian truck driver during an argument about parking.

The attack happened in the Palestinian area of Wadi Joz in East Jerusalem. The officer, a member of the Yasam reconnaissance unit, head-butts then repeatedly slaps the truck driver as he is trying to speak.

The officer continues continues to beat the Palestinian as he grasps his head and doubles over, with further blows to the stomach and head.

Israeli-Palestinian MP Ahmad Tibi called for the officer’s prosecution, while politicians were outraged at the footage.

Twitter users responded, many claiming that the attack was not surprising.

Occupying Israeli police thug beats Palestinians: The causal racism of someone who know he will face no consequences. https://t.co/vtUWoTUupE

Several Arab workers are seen attempting to diffuse the situation, causing the officer to kick out towards them violently, shouting "get out of here, all of you".

The driver later told Israel Radio "He didn’t give me a chance to speak. I was afraid he would shoot me."

Israel police said the attack was "unbefitting a police officer".

"After receiving the video, the officer was put on immediate leave and will be called in for a hearing regarding his future in the police," a statement said.

They also said the video was sent to the police investigation unit. 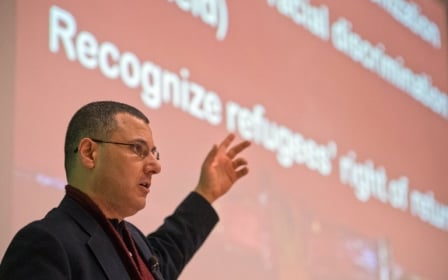 Boycott
Israel couldn't get the BDS founder on anything else. So they went with taxes
Richard Silverstein