Around 137 Israeli settlers entered the compound on Thursday through the Moroccan Gate, which leads to the Western Wall plaza inside the Old City of Jerusalem, Quds News said.

The incursion took place on Israel's Independence Day, which runs this year from Wednesday to Thursday evening.

The occasion is known as Nakba Day ("Catastrophe") to Palestinians, who mark the forced displacement of hundreds of thousands of Palestinians before and during the founding of the modern Israeli state in 1947-48 every year on 15 May.

The settler tour also coincided with the fourth day of the holy month of Ramadan, when thousands of Palestinians from Jerusalem, the rest of the West Bank, and inside Israel go to Al-Aqsa each day to pray and break their fasts.

Also on Thursday, under the banner, "Their Independence Day is our Nakba Day", thousands of Palestinians from inside Israel marched to Khubbayza, a depopulated and destroyed Palestinian village.

Located in the Haifa area, Khubbayza was destroyed by Israeli para-military forces in 1948 as part of Plan Dalet, the state-sanctioned plan to force Palestinians out of the newfound Israeli state.

Thursday's incursion into the Al-Aqsa mosque compound is not the first time Israeli settlers have entered the area under heavy Israeli police and military protection.

Israeli settlers regularly enter the area, and often perform Jewish prayers on the site, which is where they believe the Second Temple once stood.

Some right-wing Israeli activists have advocated for the destruction of the Al-Aqsa mosque compound to make way for a Third Temple. 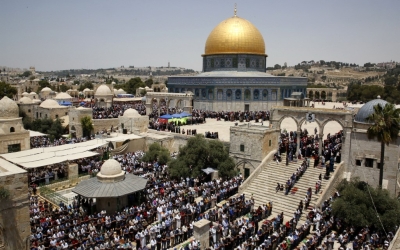 Increasingly, these activists have sought to build support for an increased Jewish presence at the site, despite a longstanding, joint guardianship agreement between Israel and Jordan, which retains control over Christian and Muslim holy sites in Jerusalem.

In February, tension increased at the compound after Palestinians opened the Al-Rahmeh and Al-Tawbeh prayer areas, despite an Israeli court ordering them shut in 2003.

Palestinians have argued that Israel has no power over what happens inside the compound, and therefore they said they would not abide by the court's ruling.

The Al-Aqsa mosque is the third holiest site in Islam. It was also Islam's first Qibla, the direction towards which Muslims must turn to pray, before that was changed to Mecca, in Saudi Arabia.

Palestinians fear settler tours inside the Al-Aqsa compound may erode their claims to the area, and further extinguish their aspirations for full rights and a state of their own, with East Jerusalem as its capital. 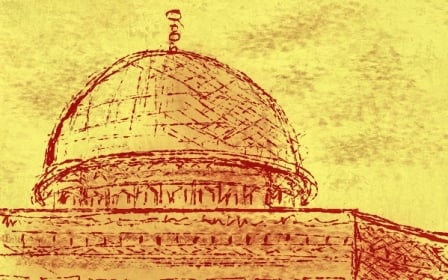 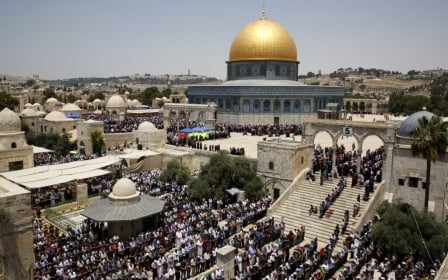