Jordan: The women's rights row behind *that* brawl in parliament 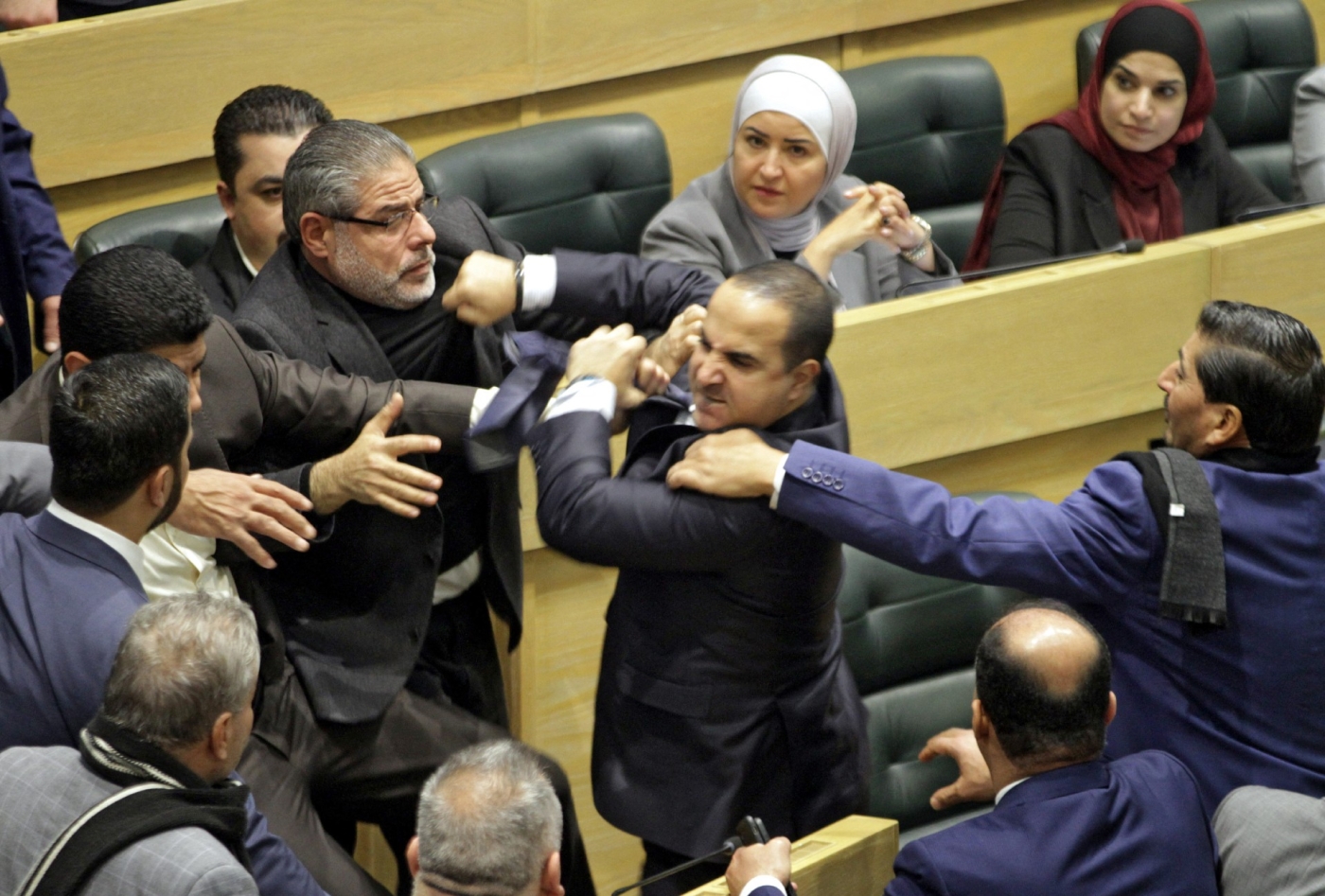 You may have seen the images: Jordanian MPs throwing punches, shoving each other and shouting across the parliament floor.

The furore that surrounded a constitutional amendment being passed in Jordan's parliament on 28 December made headlines across the world. The content of those amendments, however, not so much.

MPs were voting on changes that would specifically name Jordanian women in the kingdom’s constitution. Ninety-four of 120 parliamentarians voted for, with 26 voting against, passing the amendment despite the heated scenes under the dome of the legislative hall.

So adding the word women to the constitution seems a bit too threatening for some Jordanian macho parliament members. The pain is real.pic.twitter.com/fHufhYakMm

Yet few people were satisfied with the outcome.

For Jordanian feminists and supporters of equality, the amendments only paid lip service to women, merely acknowledging their presence rather than securing them rights.

While conservatives in the kingdom warned that it was the first step towards opening up Jordanian citizenship for a raft of people who are currently ineligible, which they argue will undermine Jordan’s traditional society. Some have even claimed it will undermine the claim of Palestinian refugees to return to their ancestral homes in what is now Israel.

The amendment is one of many - part of a “modernisation” process drawn up by a royal commission last year.

The commission suggested adding the female Arabic noun for Jordanians to the constitution as a way of increasing women’s political participation. Subsequently, the government suggested explicitly mentioning Jordanian women in article six of the constitution, which states: “Jordanians shall be equal before the law. There shall be no discrimination between them as regards to their rights and duties on grounds of race, language or religion.”

Those objecting to the amendment have been divided between religious MPs and conservative ones. They argue that the change will have far-reaching effects on the entire structure of the constitution and the legal framework. According to the amendment’s critics, the change cannot be applied to Jordan’s current legislation, particularly personal status laws, which are based on Sharia. Conservative MPs said the change will also open a route for citizenship to be granted to the children of Jordanian women married to men of other nationalities - particularly those who have children with Palestinians.

Like many countries in the region, Jordan forbids women from passing their citizenship to their children.

On the other hand, women activists have also found fault with the wording: arguing that the word “sex” should be listed alongside “race, language or religion” to explicitly outlaw discrimination.

Hayyat al-Masimi, a former MP from the Islamic Action Committee, rejected the amendment. “Our concern is that this will intervene with personal status laws which are based on Islamic Sharia,” she told Middle East Eye.

According to Masimi, women in civil society complain about discrimination in regards to inheritance, divorce and guardianship - but instead of tackling those issues individually and personally, they are attempting to change civil law.

She argued that the changes to the constitution’s wording are substantial. The work of women’s activists shows conservatives’ fear is not unfounded, she said.

“There are many examples and activities in Jordan that are spearheaded by civil society organisations that reinforce our fears - among them giving women the right of passing citizenship to their children, which opens up the entire issue of citizenship."

More than 110,000 Jordanian women are married to men of non-Jordanian origins, and there are around 340,000 children born of these unions, according to the interior ministry.

Of those, Palestinian husbands are the largest single group, numbering 55,505. Some conservative Jordanians have argued that allowing their children Jordanian citizenship opens the floodgates to Palestinians becoming Jordanian at the expense of the Palestinian cause.

More than half of Jordan’s population of 11 million are Jordanians of Palestinian origin. Around 2.1 million Palestinian refugees are also believed to live in the kingdom.

Sahem Abadi is a journalist who belongs to the New Wasfi political movement, which espouses Jordanian nationalist, anti-refugee beliefs. It is named after the late prime minister Wasfi Tal, who they believe preserved Jordanian identity.

Abadi is very concerned about the amendment. “Adding the feminine term of Jordanians will require many additional changes because it will contradict what exists now,” he told MEE.

In 1980, Jordan signed the Convention on the Elimination of All Forms of Discrimination Against Women (CEDAW). It was ratified 12 years later. Conservatives railed against the international treaty's proscriptions, particularly a clause that says: “States that are party to the convention give equal rights to men and women in terms of the freedom of movement, housing, and residency.”

Yet progress for women on these fronts has been slow since the early 90s. Abadi worries that the new amendment will give new impetus to bring Jordan into line with the convention.

“This is an attempt to legitimise the CEDAW convention and is clearly made to please foreign embassies and local NGOs,” the conservative journalist argued.

“We totally reject any effort of giving citizenship to persons of other nationalities because this will dilute the Jordanian identity and demographics. The constitutional amendments are unacceptable, and we insist on the need for a popular referendum and not limiting the issue to a parliament whose decisions are liable to pressure.”

Not only do many Jordanian women disagree with these views, they argue that the new wording in the constitution is totally inadequate and barely tackles discrimination at all.

Nor al-Islam, a women’s rights activist, says the “most important” addition that could have been made was one calling for the elimination of all discrimination that is based on gender under law. She described the amendment in article six passed last week as “simply lip service”.

Salma Nims, secretary-general of the national committee for women, thinks the same. “The amendment is less than what is expected and doesn’t satisfy our demands,” she told MEE.

“We had informed parliament and all pertinent parties, including the royal commission, that what is needed is adding the term ‘sex' to article six. But due to pressure on the royal commission the compromise was to add the feminine term of Jordanians to the existing terms.”

Nims dismissed the argument that such wording cannot be compatible with Jordan’s Sharia-based laws.

“Eleven Arab Islamic countries state in their constitution that citizens will not be discriminated against based on their gender, even though these countries all state that the national religion in the country is Islam,” she said.

“Therefore, this latest amendment does not stop discrimination based on gender. If we look at articles 102 and 106 of Jordan’s constitution it talks about personal status issues that are legislated by sharia and sharia courts, therefore there is no threat by making that addition.”

'Yes, we want to change legislation that discriminates against women - and the first of these is the citizenship law'

As for opening up citizenship to the children of Jordanian women, this is indeed an aspiration for many women’s rights activists in the kingdom. The amendment to article six disappoints these advocates, however, as they feel it does nothing to promote this cause.

“Yes, we want to change legislation that discriminates against women - and the first of these is the citizenship law,” says the lawyer Hala Ahed.

“There are many who have suffered unjustly due to this discrimination under the guise of protecting the country and safeguarding the [Palestinian] right of return. These are simply slogans aimed at justifying injustice and discrimination.”

Jordanian law must fall in line with the CEDAW and other human rights conventions the kingdom is party to, she said.

“All these conventions, along with the CEDAW, are part of the collective Jordanian legal structure and override laws that contradict it.” Inside Jordan
Brawl erupts in Jordanian parliament during debate on reforms