Hundreds of IS militants, including senior leaders, were able to bribe their way to freedom, Iraqi commanders claim 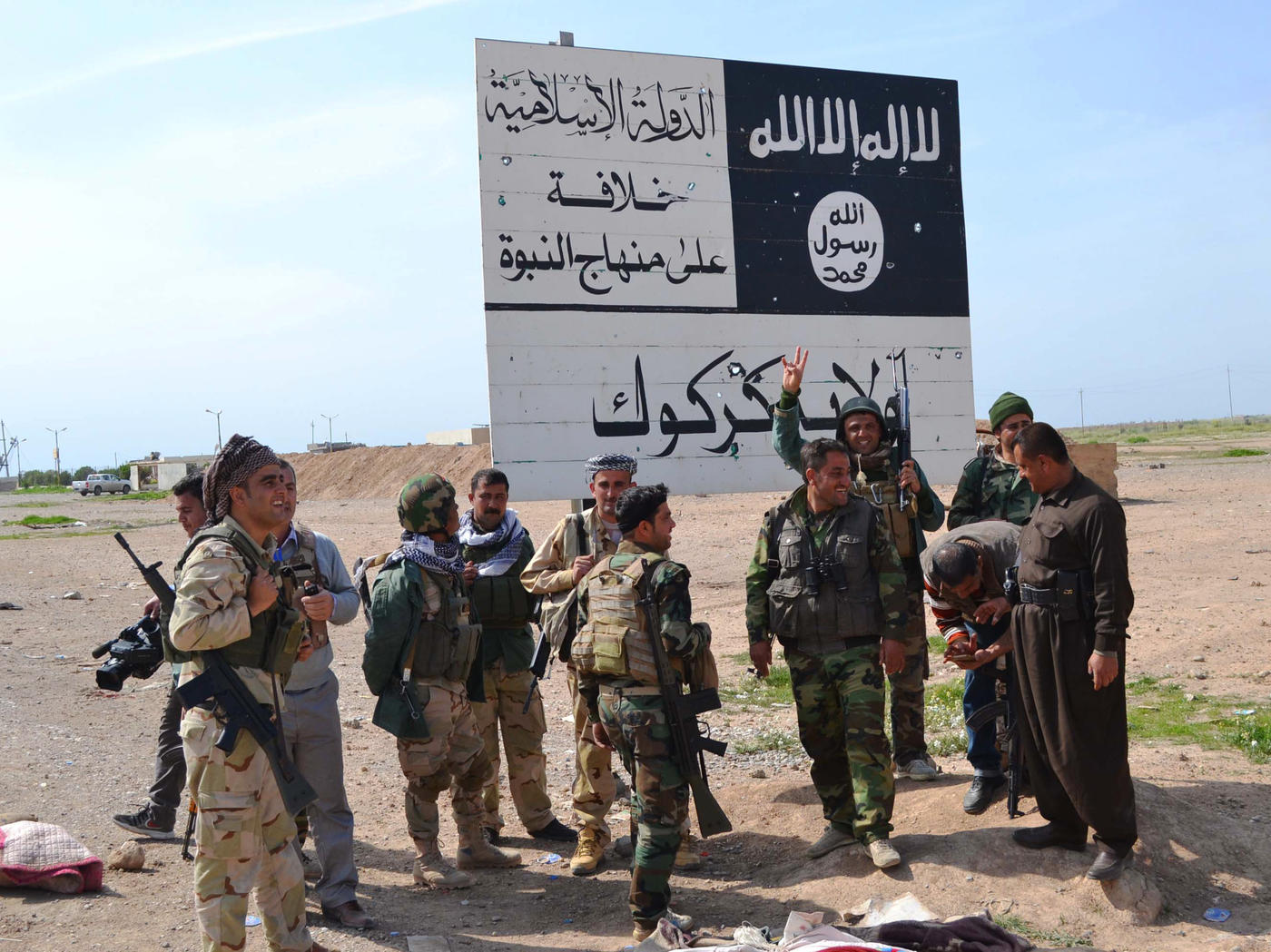 Iraqi commanders in the battle for Hawija have claimed Kurdish Peshmerga forces helped hundreds of Islamic State (IS) group militants to escape the group’s final stronghold in northern Iraq.

“IS fighters have escaped Hawija via Peshmerga positions and [before the Hawija battle began] the Peshmerga received 160 IS leaders,” said Mahdi Taki, commander of the Hashd al-Shaabi’s 52 Brigade.

"We are getting this information directly from our Peshmerga contacts. There are some bad Peshmerga who love money more than patriotism, and they are taking bribes from IS.”

Hawija was deserted on 5 October after a two-day battle to liberate the town.

'There are some bad Peshmerga who love money more than patriotism, and they are taking bribes from IS'

Beyond extensively mined roads and premises rigged with IEDs, ground forces had found resistance stripped to a bare minimum of snipers and militants left to man mortar positions or carry out suicide attacks against advancing soldiers.

Before the military reached the town, many hundreds of IS militants and commanders had reportedly fled Hawija, and effectively vanished.

With the area surrounded by Iraq’s combined military forces, the final escape route for IS members was across scrubland towards static Peshmerga positions lining disputed borders then controlled by the Kurdish Regional Government (KRG).

The Peshmerga was the only Iraqi force not to participate in the Hawija offensive, despite having made claims the land is historically Kurdish.

Some 1,000 IS militants reportedly surrendered to Peshmerga forces, Kurdish security officials have reported, while Iraqi forces continued to liberate Hawija and the surrounding areas.

Hawija’s IS wali (governor) had told militants to surrender to the Peshmerga rather than risk being killed by the advancing Iraqi forces, one IS militant held by the Peshmerga at a screening centre in the border town of Dibis told the New York Times.

But Iraqi commanders leading the Hawija front lines told MEE that many more IS leaders, fighters and families had bribed the Peshmerga to be allowed to pass freely into Iraqi Kurdistan.

“According to our intelligence sources, we estimate that in total 3,000 IS - including leaders, fighters and families have gone to the Peshmerga from Tal Afar, Hawija and the surrounding areas,” said another Hashd al-Shaabi commander, speaking on condition of anonymity.

“IS leaders and fighters are mainly going to Erbil, and IS families have mainly relocated to Kirkuk, all pretending to be normal civilians.”

Some local Hashd al-Shaabi units stationed in and around Kirkuk, who have longstanding relationships with the Peshmerga, said prices for fleeing militants started at $1,000 for an ordinary fighter and $2,000 for a family, with senior IS leaders paying considerably more, apparently up to $10,000.

According to intelligence received by senior sources in the Hashd al-Shaabi, a company based in Kirkuk known as Khalid’s Office ran a sideline in helping militants plan their escape.

'This is a good chance for the Peshmerga because they have no money, and only limited weapons'

For any IS member with $1,000, a car, a weapon, or even a herd of sheep, a few phone calls to Khalid’s Office was apparently all it took for an IS member to organise his escape into Iraqi Kurdistan.

Once he had arrived at a checkpoint near Dibis, just 20 kilometres from the oil-rich city of Kirkuk, he either handed over a wad of cash or items of value, and was then allowed to freely pass, and from there go to Erbil or elsewhere in the KRG, the sources say. This checkpoint is now controlled by Iraqi forces, after they took control of the disputed Kirkuk province earlier this month.

“This was a good chance for the Peshmerga because they have no money, and only limited weapons,” said an Iraqi army major.

The KRG has received no budget from Baghdad for more than three years, and Peshmerga fighters currently receive only 75 percent of their wages, payments which are routinely delayed, according to Kurdish officials.

As the KRG is only semi-autonomous, official arms imports for the Peshmerga still have to go through Baghdad, which has been accused of co-opting military supplies intended for the KRG.

A few miles further north, in a remote rural spot, were the bodies of two IS members killed when trying to flee on foot. Federal Police had killed three and arrested a further two in the remote spot, a local said.

Repeated attempts to seek comment from Peshmerga officials were unsuccessful.

Several Iraqi commanders claimed that the relationship between IS fleeing from Hawija and Tal Afar and the Peshmerga was not a new one.

“When operations started, IS started running to the Peshmerga and this continues even up to now,” said commander of Hashd al-Shaabi’s Brigade Number Four, Ali al-Heideri.

“And this is not the first time the Peshmerga have been together with IS. It was exactly the same with [the battle for] Tal Afar.”

He claimed recent incidents were merely an extension of a long-standing relationship which had been ongoing during the three and a half years that IS controlled an area of Iraq.

“In the past, most IS fighters coming from Syria and going to Tal Afar were paying the Peshmerga to enter Iraq through Kurdistan but, in the last days of the battle, they were free to come and go without paying,” he said.

Heideri also claimed that the KRG not only welcomed IS but any militants in the region who were looking for refuge, saying they were allowed to live freely in the semi-autonomous state. Thousands of exiled Iranian Kurds, many of whom are wanted by the Iranian government for subversive activities, currently live in Iraqi Kurdistan.

“The Peshmerga has opened their front-lines to accept IS running from here,” said commander of the Hashd al-Shaabi’s Imam Ali Brigade, Sheikh Kareem Harkani, after the liberation of Hawija.

“It was the Peshmerga who gave IS to Iraq in the beginning, with most of them coming here from Turkey via Dohuk, so they’re leaving the same way they entered.”

In Iraq, the KRG is widely believed to have struck deals with IS, to secure its territory from attacks from the militant group. For three years, IS controlled extensive oil infrastructure in Iraq and funded their activities on the profits of illegal oil sales.

Gesturing towards the horizon of burning oil wells, Hawija local councillor Nurhan Mizhir al-Assi said: “It was Kurdish oil trucks that came here under IS and drove the oil to Turkey. Civilians who stayed here told us exactly what was happening.”

Iraq’s Federal Police deputy commander Abu Theraham al-Moutour said intelligence reports confirmed that some 500 IS militants had fled from Hawija to the Peshmerga just days before the Iraqi forces reached the town.

“We know they are not being taken prisoner, so maybe they will fight against us with the Peshmerga in the future," he said.

Harkani said any future alliance between IS and the Peshmerga was a potential problem that would be dealt with easily and swiftly by the Iraqi forces.

“Iraq has become so strong and united now, with all our military forces working together. Therefore, if the Peshmerga use Daesh to fight against us, the Kurds will be the bigger loser, even more than Daesh,” he said.

Harkani was also nonchalant about the long-term future of any alliance between IS and the KRG which, he predicted, would inevitably backfire on the Kurds.

“Those Daesh who have gone inside Kirkuk, in the future, will surely turn against the Kurds,” he said, reiterating that the Kurds stood only to lose from any partnership with IS.