Shaker, whose real name is Fadel Shamander, was sentenced in absentia to 15 years for “involvement in terrorist acts committed by terrorists” and “for providing logistical services”, according to Lebanon’s National News Agency.

The court issued a second sentence against Shaker of seven years in prison and a fine of 5m Lebanese pounds ($3,312) for financing the armed group of the radical cleric Ahmed al-Assir and for securing it weapons and ammunition costs.

The Lebanese Permanent Military Court had sentenced Shaker in September 2017 to 15 years in prison with hard labour and issued the death penalty against Assir for armed clashes between his militant group and the Lebanese army in the southern city of Saida.

At least 18 soldiers and 13 armed men died in fighting that erupted in the neighbourhood of Abra when supporters of Assir opened fire at a military checkpoint in June 2013 amid tensions in Lebanon heightened by the civil war in neighbouring Syria.

Assir was arrested at the airport in Beirut in 2015 while trying to flee Lebanon with a fake Palestinian passport. At the time, he had changed his physical appearance by shaving his beard and sporting a moustache with large eyeglasses.

Shaker quit music to become a full-time vocal supporter of Assir, and has hidden in the Palestinian refugee camp of Ain al-Hilweh near Saida since the Abra clashes.

But he has been trying to make a comeback to the music world since 2013. “I’m an artist. I don’t know how to do anything else,” he said in an interview in 2018 with Middle East Eye.

He has released several singles in Egyptian and Gulf dialects since 2018, the latest of which came out on Monday, garnering more than two million views in 72 hours. 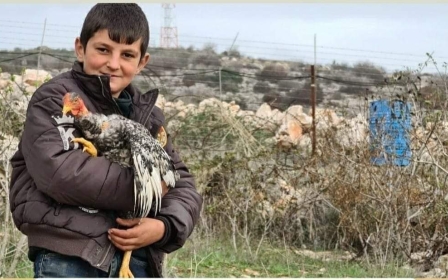