Protesters say they were hit with baseless terrorism charges and tortured by Lebanese security forces, according to HRW report Anti-government protesters stand during a nightly protest in the centre of Lebanon's impoverished northern port city of Tripoli late on January 31, 2021 (AFP)
By
Nadda Osman

According to the rights group, individuals who were protesting against the strict Covid-19 lockdown coupled with declining economic conditions have found themselves facing unsubstantiated terrorism charges.

Protests broke out in Tripoli in January as mounting frustration with the dire state of the economy pushed many people to demonstrate in the streets. Clashes between security forces and protesters resulted in the violent dispersal of crowds and the arrest of many.

Over 200 people were wounded in the protests and one man was killed after sustaining bullet wounds.

Aya Majzoub, a Lebanon researcher at Human Rights Watch, called on the Lebanese government to answer for the number of disappearances that have taken place and the torture that some detainees claimed to have endured.

“Lebanese authorities should address the legitimate grievances of people in Tripoli but instead they’ve escalated repression against a population fighting for a dignified life,” she said.

One of the individuals interviewed by the rights group, Ali Hashem, 34, said he was slapped, kicked and beaten by officers from the Military Intelligence branch in Chtaura.

Although Lebanon passed an anti-torture law in 2017, HRW has documented the continued reports of torture since then.

According to HRW, the Lebanese government and security agencies have also used the country’s military courts to intimidate people and stifle activists and dissidents.

Trying demonstrators in military courts undermines the impartiality and independence of the process, HRW said, and many have also stated that they faced interrogations without the presence of a lawyer, arbitrary sentences and a limited right to appeal.

Mazjoub stressed that those who have been arrested should be charged in civilian, not military courts.

“If the Lebanese authorities think there is any substance to these charges, they should refer the case to the civilian courts, ensure that the accused receive a fair trial, and investigate the serious allegations of enforced disappearance, torture, and denial of due process,” she said.

In some of the examples documented by HRW, defendants were taken in the middle of the night, blindfolded and interrogated while in handcuffs.

The report also sheds light on the deteriorating conditions that defendants have been held in. Many said they were wet, cold and were not given adequate materials to clean themselves or their cells, which has raised concerns over the spread of the coronavirus pandemic. 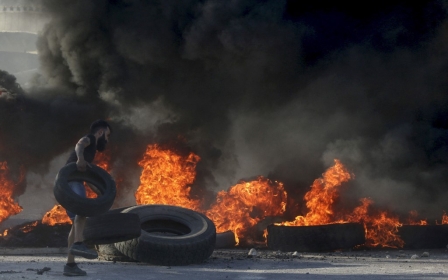