Diplomats and western leaders are pinning their hopes for Libya's stability on Friday's gathering in Paris, in one final push to pressure the country's rival politicians into holding planned presidential elections in six weeks.

The summit, which is being organised by the United Nations, France, Italy, and Germany, has attracted big names including United States Vice-President Kamala Harris and UN Secretary-General Antonio Guterres.

But analysts warn that divisions between international powers and bickering among factions inside Libya are likely to cloud any show of support for elections.

"You could have a summit that contains a lot of signals but no coherent conclusion," Jalel Harchaoui, a Libya expert and senior fellow at the Global Initiative Against Transnational Organized Crime, told Middle East Eye. 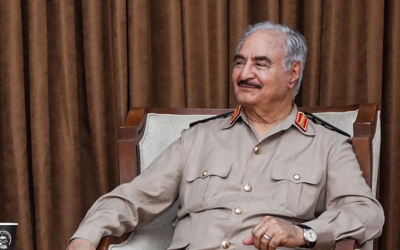 "If that's the case, then Libyans will be left to go through the next six weeks with legal obstacles, security dangers, and a lot of ambiguity."

An oil-rich country of seven million people, Libya has been roiled by conflict since the overthrow of long-time leader Muammar Gaddafi in 2011. The latest round of fighting has pitched the internationally recognised government in Tripoli against the forces of eastern-based commander Khalifa Haftar.

That conflict spiralled into a proxy war, with Turkey backing the government in Tripoli, and Egypt, the UAE, Russia, and France supporting Haftar to varying degrees. The fighting only subsided last October after a UN-brokered ceasefire was signed in Geneva.

As part of that agreement a new government was formed with the purpose of uniting the warring eastern and western halves of the country, and steering Libya towards presidential and legislative elections on 24 December.

But the transition from warzone to election battleground has not been smooth. With just a little over a month to go before the vote, Libya still lacks an electoral law, foreign fighters have yet to be removed from the country, and state institutions, including the military, remain divided.

"There might not be any fighting because the armed groups are about to be too busy selling their services for the elections," Tarek Megerisi, a senior policy fellow with the North Africa and Middle East programme at the European Council on Foreign Relations, told MEE.

A renegade general and Gaddafi's son

Megerisi sees reason to be alarmed about holding elections under such circumstances.

"Countries like France, and the US to a certain extent, believe the risk of not holding elections is greater than the risk of  holding them," he said. "[But the] legal framework is disputed, and the constitutional basis is poorly formed."

The elections themselves have already become a flashpoint for Libya's squabbling politicians, with some calling for the vote to be delayed, and others sensing opportunity.

One early critic, who now appears to be hedging his bets with a potential run, is the current prime minister, Abdul Hamed Dbeibeh.

As head of the transitional government he initially promised not to seek election, but the Gaddafi-era construction magnate with close ties to Turkey has seen his political base expand during his short time in office. 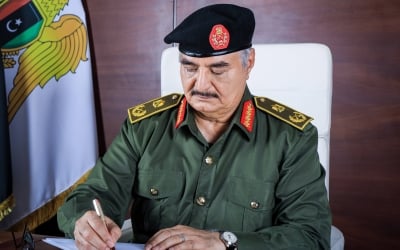 "He is more popular in Libya now then he was six months ago," Harchaoui said.

Dbeibeh has used his position to dole out state funds to Libyans, and has won some support across the east and west with programmes including state payments of more than $8,000 to newly married couples.

He is also seen as someone close to the old guard. "The Gaddafi people like Dbeibeh," a Libyan official, who will attend the Paris conference, told MEE on condition of anonymity.

Gaddafi's son, Saif al-Islam, is also considered a potential candidate in the December vote. If either of these two men do run, many analysts say they could be joined by another contender, Khalifa Haftar, the 78-year-old field marshal and one-time CIA asset who continues to wield power in the country’s east.

While Haftar is not expected to attend the Paris conference, his presence is likely to be felt in the room. Megerisi says the upcoming elections offer the commander a chance to "rehabilitate himself" as a political figure.

"These elections are in Haftar's favour. I don't think he will try to disrupt them, but play to them and use them to his advantage," he said.

Some of Haftar's opponents seem to be taking notice. Khaled-al-Mishri, head of Libya's High Council of State, and a close ally of Turkey, on Tuesday called for a boycott of December's vote. He previously claimed the election laws had been written by Haftar's foreign backers.

The intrigue and uncertainty around the elections appear to be spilling over into the Paris summit, as Libya's politicians jostle between themselves over who should even attend.

The Libyan official who spoke to MEE said Dbeibeh, sensing an opportunity to gain more recognition before elections, has been eager to travel to Paris. "He craves the spotlight and would shake hands with anyone to become president," the source said.

That has put him on a collision course with the head of Libya's Presidential Council, Mohamed Menfi, who is expected to be present at Friday's summit.

The Libyan official said Dbeibeh was also coming under pressure from Ankara not to attend the conference, for fear that he risked drawing attention to his plans to run for election - despite promises he made to the contrary to the international community.

"This conference is the last-ditch effort to make sure the current government in Libya disappears soon," Harchaoui said. "So if you are trying to remain in power, why would you want that exposure?"

Nate Wilson, Libya country manager at the United States Institute of Peace, said a decision to go against the advice of an international backer would be in keeping with wider dynamics in the country: "[political actors] in Libya take actions that defy their supporters quite often."

Dbeibeh's decision to travel to Paris means he is not the only one reluctant to give up a seat at the summit. In a suprise move, Ankara - which initially said it would boycott the gathering in protest at the participation of Greece, Cyprus and Israel - announced on Friday that it would be sending Deputy Foreign Minister Sedat Onal. Libya hoped its elections could heal the country. Instead, they could make it worse
Read More »

Given the location of the event in Paris, Turkey will likely expect to find itself on hostile ground.

The two countries have been at loggerheads in the region, with France backing Greece and Cyprus over its maritime disputes with Turkey, and selling military hardware to Cairo.

The Libyan official who spoke with MEE said, despite France ostensibly appearing an honest broker, he believes the Elysee will continue to support Haftar in Libya.

Harchaoui said many global powers still look at Libya as one piece of a wider geopolitical struggle in the region: "Instead of solving Libya on its own grounds, the country has become enmeshed in a wider conflict in the eastern Mediterranean."

With tensions running high, it has been hard for these powers to even agree on a withdrawal of foreign fighters - a condition which many have said is necessary to ensure free and fair elections.

Syrian rebels deployed by Turkey remain in the country, while Russia, whose foreign minister is attending the summit, has shown little willingness to push for the removal of Russian-backed Wagner Group mercenaries.

Harchaoui says, given tensions between France and Turkey in the region, Ankara is likely to draw most of the conference's ire over the presence of its foreign troops.

"France is not going to single out the Russian mercenaries, and that silence will be enough for Moscow," he said.

And just because the fighting is over for now, it doesn't mean a fierce competition for power is not still playing out, said Wilson.

"The external powers involved in Libya are hedging their bets for after the elections, hoping they can win contracts and influence," he said. 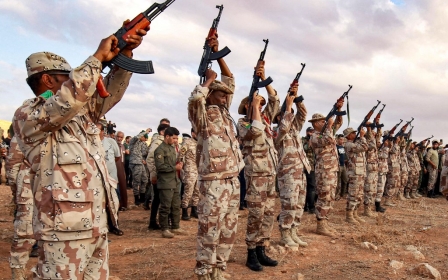 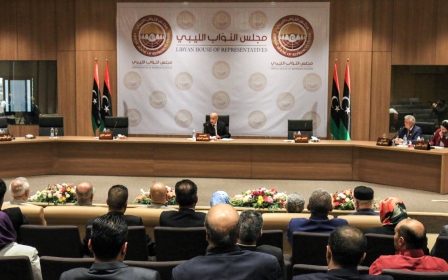 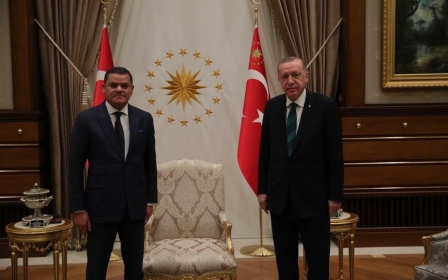