Five months into the LNA's offensive on the Libyan capital no side seems close to victory, despite heavy foreign backing 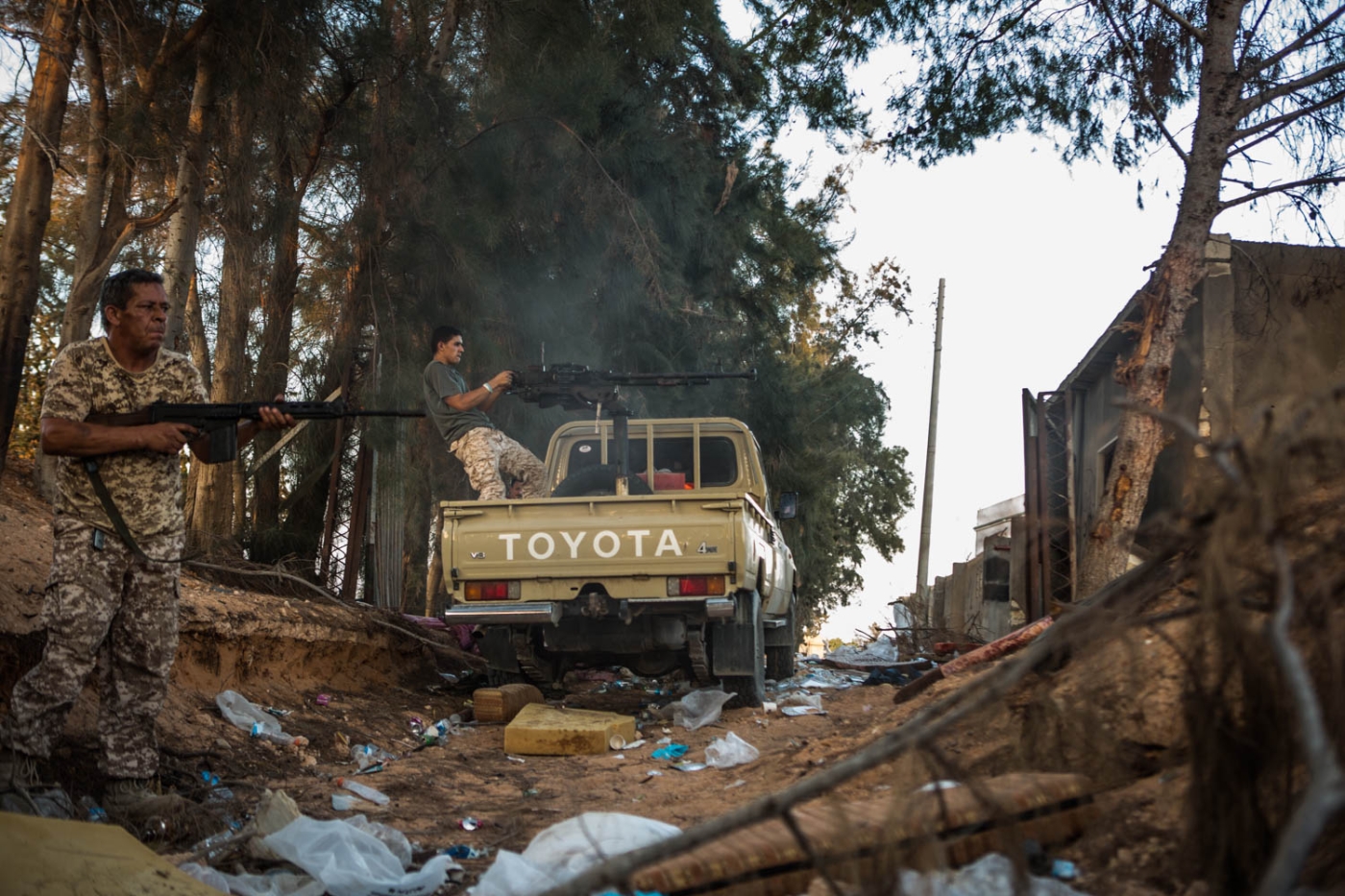 For five months, military leader Mohammed al-Durat and his fighters from Misrata have been dug into southern Tripoli’s mostly static front lines near their Yarmouk base.

Not much has changed on the battlefield since eastern commander Khalifa Haftar and his self-styled Libyan National Army (LNA) mounted a surprise attack on the capital on 4 April, while UN Secretary General Antonio Guterres was on a visit to Tripoli.

Breaking the trust of negotiators, Haftar launched an offensive ten days before all parties to Libya’s nearly decade-long conflict were to gather to resolve political grievances at a UN-backed conference in the city of Ghadames, which was intended to set in motion a national dialogue, an agreement on the constitution, and democratic elections.

Based on erroneous intelligence, the LNA had counted on a swift victory over Tripoli, which is controlled by the UN-backed Government of National Accord (GNA).

Haftar’s LNA leads its ground and air wars with bombastic rhetoric, as spokesman Ahmed al-Mismari recently declared: “We will eradicate terrorists wherever they are.”

These are ironic words for Durat’s men, who fought Islamic State (IS) group militants and sustained heavy losses in the battle for the city of Sirte in 2016.

Before that, they survived intense urban combat in 2011 against dictator Muammar Gaddafi’s troops in Misrata. They now say they are fighting for the survival of the revolution itself.

According to United Nations Mission in Libya (UNSMIL), despite an uninterrupted oil supply of 1.2 billion barrels per day and increased budget revenue, Libya is expected to run a budget deficit of up to $10 billion this year to sustain the conflict.

“More than 100 civilians have been killed and over 300 injured, and 120,000 civilians have been displaced,” UNSMIL representative Ghassan Salame reported to the UN Security Council on 4 September. “There are no confirmed figures for the total number of fighters who have died so far, but anecdotally the figure appears to be in the low thousands.”

“My men are okay. We’ve sustained some casualties, but we’ve added more [fighters]," Durat told Middle East Eye. “We are holding our positions and from time to time, we see the enemy.”

The Misratans, along with fighters from Tripoli, Zawiyah, Zintan and other coastal towns, as well as the Amazigh, are mostly volunteers fighting under the GNA umbrella scattered along Tripoli’s southern suburbs.

The men are from the same towns that fought against Gaddafi in 2011, Libya researcher Wolfram Lacher notes.

The LNA’s “Flood of Dignity” offensive is led by a coalition comprising of the Kaniyat brigades from Tarhouna, and fighters from Zintan, pro-Haftar coastal towns, the south, and foreigners, including paid Sudanese from the Rapid Support Forces (RSF) and rebel groups from Sudan (JEM and SLM-MM).

Durat claims around a dozen LNA mercenaries, whom he said were Sudanese, surrendered to his forces and handed over their ammunition, weapons and two vehicles. In turn, the Misratans sent them back in the direction of the south.

“They thought they were going to die and the money Haftar pays them would mean nothing,” he said. “There are a lot of dead already.”

During the night, his contingent stays under the cover of darkness to avoid air strikes from the incessant drones buzzing overhead, identified as Chinese Wing Loongs supplied by the United Arab Emirates.

“We don’t know what they’re armed with, but in the field we see grads, mortars, Kornet missiles and tanks,” Durat said. After the GNA seized the strategic town of Gharyan from LNA in June, they found US-made Javelin missiles and Chinese rockets left behind.

“We are not afraid of the drones, but we are afraid of the F16s,” comments an older fighter, Hassan Kara, who said they’ve struck three times, including next to Yarmouk camp.

“We don’t want this war. If Haftar stops the air campaign, the war would not continue. This is for sure,” he added.

Both sides of the conflict have blatantly disregarded the UN ban on weapons imports. The UN has meticulously reported weapons purchases for years.

The UAE has surreptitiously been arming the east, even building an airbase in the desert for Haftar called Al-Khadim, while the west has solicited armed shipments, mainly from Turkey.

A foreign war within a war

In this current war, the geographic reach of air warfare means everything.

After losing Gharyan, Haftar has made heavy use of logistical forward bases like Tarhouna and airstrips at Jufra and Ras Lanuf to launch fighter jets and drones that are manned by foreign pilots and advisors. Other airbases further afield are mostly dormant for now.

“There is no way you can have credible negotiations between warring parties while there is such a high level of foreign intervention,” said Tarek Megerisi, a policy fellow focusing on Libya at the European Council on Foreign Relations. “You can talk to Tarhouna and Misrata, but if a foreign drone heavily bombs somewhere, then that truce is ultimately broken.”

Foreign pilots, fighter jets and drones make up for a lack of Libyan expertise and troops on the ground.

“There are open source rumours of not only the presence of the UAE Jufra [airbase located in central Libya] but also of the French and Americans – the latter either for intelligence or to help the French – as well as a Russian military company,” one diplomat focused on Libya told MEE.

The GNA, on the other hand, is restricted to the mixed military and civilian airports of Mitiga and Misrata to store drones.

Libyan Interior Minister Fathi Bashagha had visited Turkey to discuss the conflict, and the GNA received mostly Turkish shipments of weapons, including Bayraktar drones accompanied by advisors, to level the playing field.

Haftar’s war has backers with complex concerns: Emirati ideological and territorial ambitions, Egyptian concerns about stability and security, and French regional aspirations. Meanwhile, Russia has been increasingly playing both sides of the conflict.

Shoring up the GNA are mostly European Union members, including former colonial power Italy, which has interests in oil, gas and stemming migration. Turkey is involved for ideological reasons, for maritime territories and commercial aspirations, while Qatar has given the GNA nominal support.

The US, a close ally to Misrata during the war against IS, has remained studiously ambiguous in their stance under the Trump administration. Reportedly at odds with US State Department officials, the White House is pursuing a narrow “war on terror” focus.

Jalel Harchaoui, a research fellow at the Clingendael Institute in the Netherlands, sees Libya as not just a proxy war, but a battle that has morphed into a foreign intervention. “There is a substantial portion of the war – the air strikes - that is foreign. I see an LNA ground effort that is dying and the Emiratis are trying to inject some life into it,” he said.

No sanctuary in hospitals

Combat medics face a considerable risk of dying on the front lines. One field hospital in Swani, in Tripoli’s southern suburbs, has been targeted three times despite ambulances with marked insignia parked outside and was hastily moved to an unmarked warehouse.

“We get warnings about drones and aircraft on the radio,” said Dr Mohammed Algelli.

Patients at the Swani field hospital usually suffer from gunshot and shrapnel wounds.

“I remember after we won Gharyan, the LNA declared revenge. Up to 12 people were bombed at once,” Algelli said. “We had to match up the blown-up body parts.”

The medics are anxious not to be seen outside, as one of their ambulances was directly targeted, while four others were caught in crossfire. 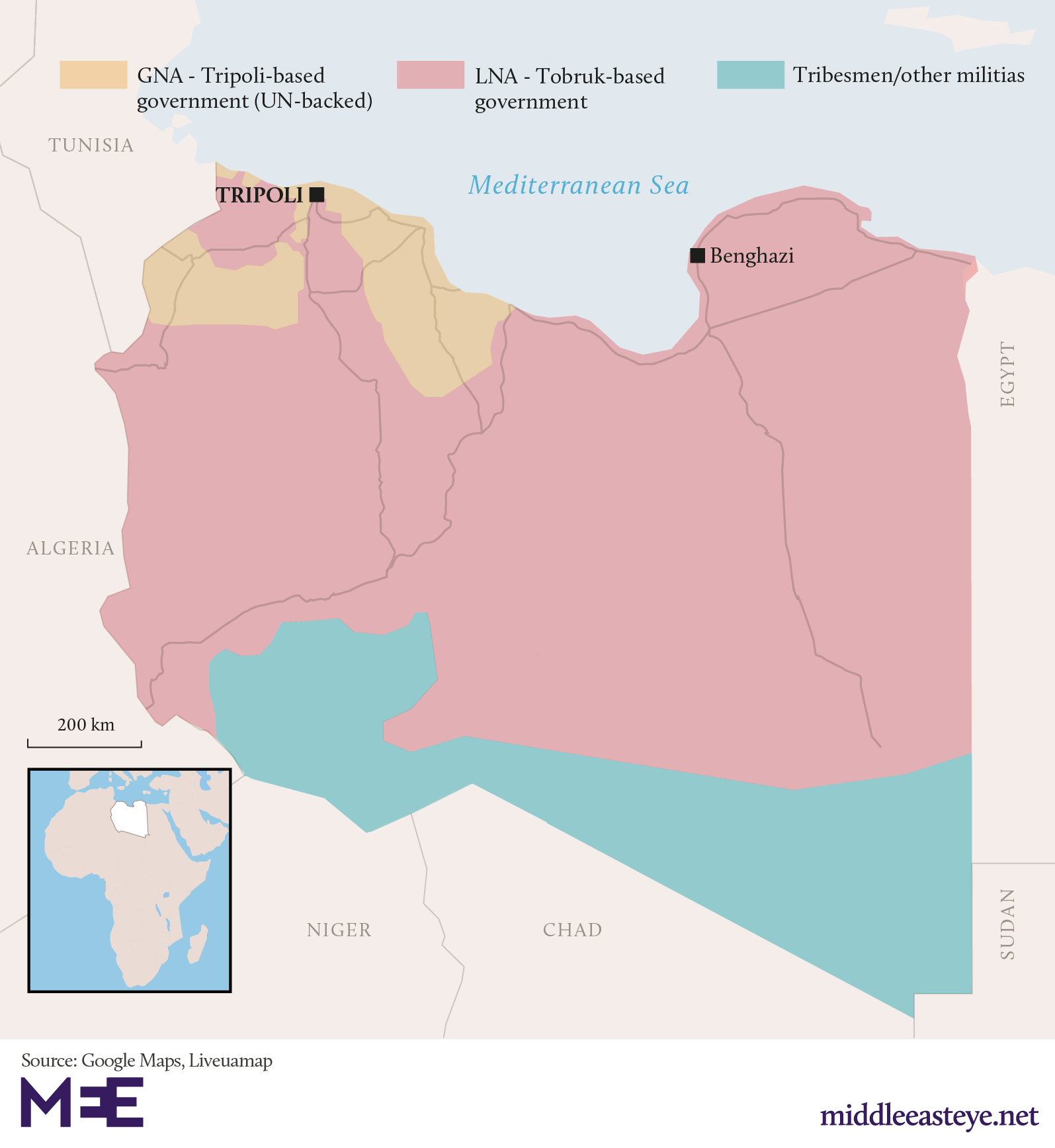 Mitiga’s crowded makeshift terminal has served as a lifeline for the city after Tripoli International Airport was destroyed by militias in the 2014 conflict. The airport is usually packed with civilians going abroad mostly to Tunis or Istanbul for medical care.

But over the past months, Mitiga has been steadily hit by strikes. A nearby hospital and a prison – under the control of Abdul-Raouf Kara and his Special Deterrence Force (SDF) – are also vulnerable to the violence.

After an attack on the civilian part of the airport - including the runway - damaged a plane carrying dozens of pilgrims on 1 September, all flights in and out of western Libya shifted to the Misrata airbase, located near a field hospital and two prisons.

Meanwhile, Tripoli residents complain about endless power cuts in the sweltering heat, water cuts, the lack of jobs and money, the quality of education and health care, and what the future holds for them.

Many view Haftar as a dictator who will turn back the revolution. They say only after they beat him can they address the entrenched and corrupt militias around them. Others seem willing to forgo their rights, saying they prefer Haftar as a law and order figure to install security.

'My children were screaming from the balcony: don’t hurt us'

The GNA and international community are often dismissed as ineffectual. Most Libyans say they see an endless war and a future that looks bleak.

Housed with a few other families in an abandoned hotel called "February 17" in the countryside suburb of Tajoura, Nour, a 46-year old mother of two autistic children, is overwhelmed.

She cried as she recounted her chemotherapy to overcome cancer - although she is proud she had kept her hair - and is now reliant on insulin to keep her diabetes at bay. She’s also distressed that other kids pick on her children.

Nour grew up in Bani Walid, the daughter of a high-ranking officer in Gaddafi’s army, and was a policewoman herself. She said she had travelled around Europe with her father - but those days are over.

Her father now lives with another wife and family in Tunis, and Nour's husband left her with two challenging kids. Nour was then forced to rent a home on Tripoli’s front lines, surrounded by clashes.

“My children were screaming from the balcony: don’t hurt us!”

Nour nervously twirled her car key and said she drives with her kids to the beach, where they have something to eat, and she can gaze out to sea and think. This is what keeps her sane.

“I want to take a boat to Europe with them,” she said. “They are the only things I love.” 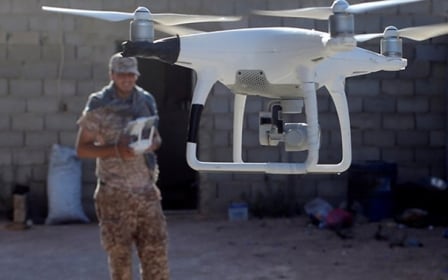 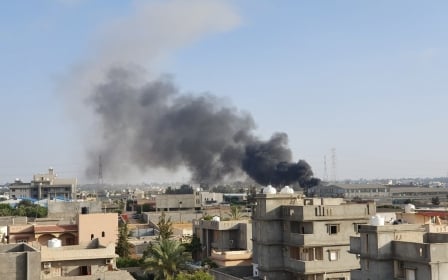