Lebanon: Hundreds mourn death of 'martyr of the revolution' 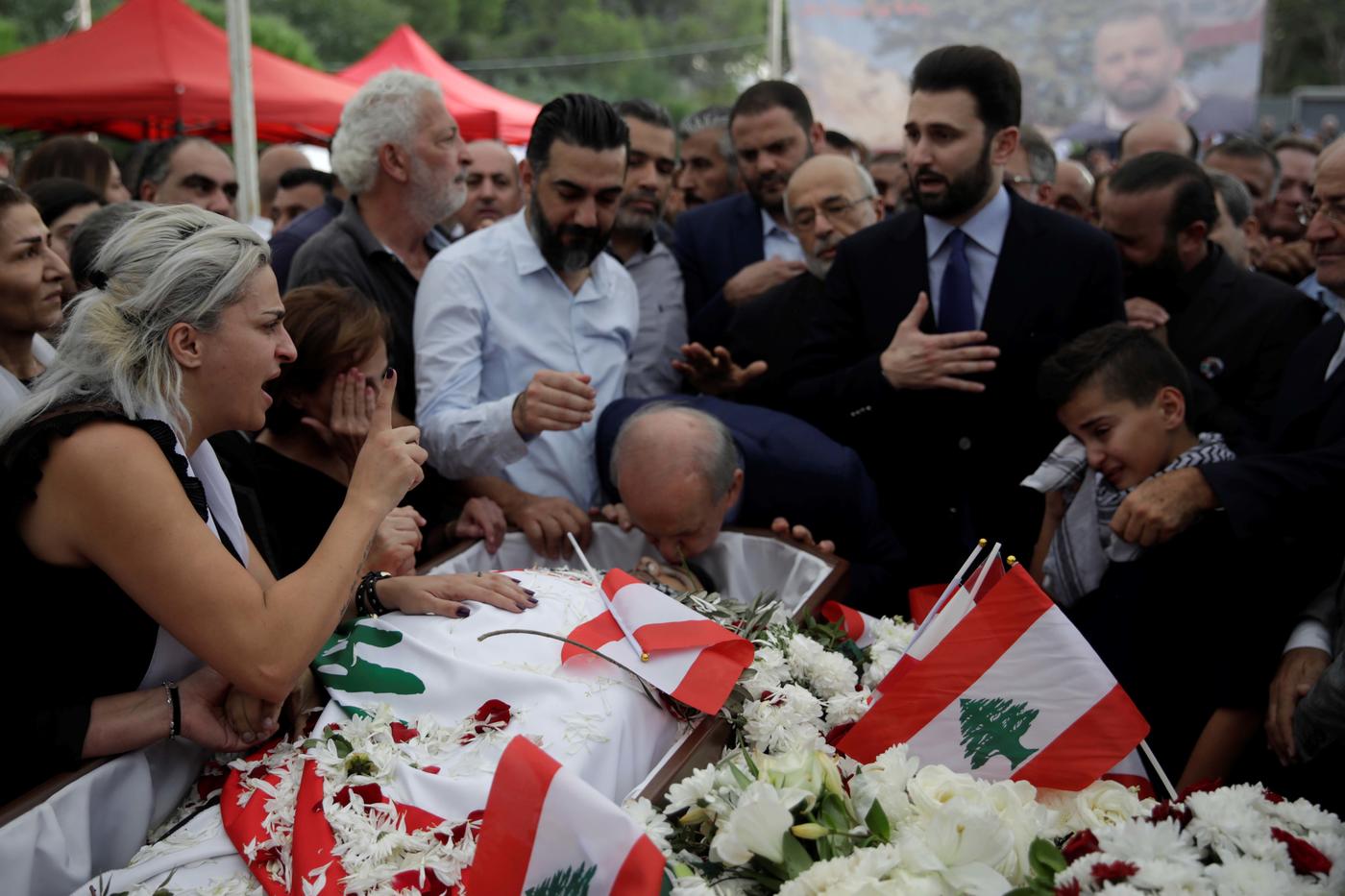 Alaa Abou Fakher was shot dead by army officer in Khalde, town south of Beirut, on 12 November (Reuters)
By
MEE and agencies

Hundreds gathered in the Lebanese town of Choueifat for the funeral of Alaa Abou Fakher, who was shot and killed by an army officer during a demonstration earlier this week.

Mourners joined Abou Fakher's family for a religious ceremony on Thursday, and the coffin, wrapped in a Lebanese flag, was carried through a huge crowd before being placed down prior to burial, Reuters news agency reported.

Abou Fakher, a 38-year-old father of three, was shot in the head after attempting to block a road on Tuesday in Khalde, a coastal town south of the capital, Beirut.

Lebanese protesters have taken part in sweeping demonstrations across the country for almost a month, calling for an end to government corruption and a revival of the country's failing economy. Abou Fakher has been hailed as a "martyr of the revolution" by other protesters, and a mural depicting him was painted in the city of Tripoli.

He is the second person to be killed since the beginning of Lebanon's protests on 17 October. Hussein al-Attar, another protester, was killed early on in the demonstrations, AFP news agency reported.

The Lebanese army said in a statement that the officer who shot Abou Fakher has been arrested.

Abou Fakher and the officer were relatives and knew each other well, according to an unidentified security source cited by local media.

The Lebanese army said it ordered an investigation into the matter, and subsequently referred officer Charbel Hajeel to the army's justice system.

Human rights organisations have condemned the killing and said that it was not being handled properly.

"Alaa's family has a right to know the full truth of what happened to him and to see those responsible for his killing brought to justice. Only a fully independent court can bring justice to Alaa and his family, sending a signal that nobody is beyond accountability as protests continue," Amnesty International's Middle East and North Africa Regional Director Heba Morayef said in a statement.

Amnesty said that access to military court hearings is restricted in Lebanon, and that since Abou Fakher's death was criminal in nature, the suspect should have access to a fair trial.

"The right to trial by an independent and impartial tribunal would be undermined should the military justice system investigate one of its own," Morayef said.

Abou Fakher's killing took place after a speech by Lebanese President Michel Aoun that reignited protests across the country.

"If people aren't satisfied with any of the decent leaders in the government, let them emigrate," Aoun said in his remarks.

He also said Lebanon would face a "castastrophe" should the demonstrations continue.

There has been little progress on the formation of a new government since Prime Minister Saad Hariri resigned on 29 October.

Protesters have demanded a government led by experts with no political affiliations.

While Aoun first pledged to form such a government, he has since changed his position, saying it would be made up of both politicians and technocrats.