In September 2015, Chekkouri was released and sent back to Morocco where authorities put him on trial for 'undermining state security' (AFP)
By
MEE and agencies

Morocco has acquitted a former Guantanamo Bay detainee, held without charge by the US military for over 13 years, of "undermining state security", his lawyer said on Friday.

Yunis Chekkouri was arrested by Pakistani forces in late December 2001 with a group of several dozen alleged fighters who had fled the Tora Bora cave complex in eastern Afghanistan, a stronghold of the Taliban and its al-Qaeda allies.

The following year he was flown to Guantanamo Bay military prison, where he was locked up for more than 13 years, but never charged.

In September 2015, Chekkouri was released and sent back home where authorities put him on trial for "undermining state security".

He was acquitted on Thursday of any wrongdoing, his lawyer Khalil Idrissi told AFP. The official MAP news agency confirmed the verdict, citing court sources.

"The mistake has been acknowledged... the charges against him were contradictory and had no logic to them," Idrissi said.

Chekkouri, who had repeatedly denied the accusations against him, told AFP after the verdict: "The nightmare is over."

In May 2017, Chekkouri, who had said he travelled to Afghanistan on a "humanitarian" mission, was sentenced to five years in prison. But he appealed.

"The verdict was unfair. I knew that I would be proven innocent," he told AFP.

"I can now say I have turned the page on Guantanamo," he said, calling it a "cruel prison" where detainees are submitted "every day to interrogations, physical and psychological tortures".

Under former president George W. Bush, the US built a prison camp on Guantanamo Bay, a naval base it built on the eastern tip of Cuba, in the months following the US-led invasion of Afghanistan.

Meanwhile, a military judge has indefinitely suspended the trial of Abd al Rahim al-Nashiri on Friday, who has been charged with planning the bombing the USS Cole in 2000.

According to the Miami Herald, the trial has been suspended because of disputes between the defense team and the judge's authority.

“This is the latest dramatic evidence of a truly broken justice system. The Guantanamo military commissions have long been plagued by fundamental unfairness, secrecy, and ethical issues caused by the government itself, among a long list of flaws," said ina Shamsi, director of the American Civil Liberties Union’s National Security Project.

In January, US President Donald Trump announced he would keep the detention facility open, breaking from his predecessor Barack Obama's efforts to shutter it.
Guantanamo Bay: Oman accepts 10 inmates from prison
Read More »

A top US military official said on Thursday that the prison in Guantanamo Bay is "prepared" to take new detainees, but has not yet received the order to do so.

"As of today we have not been given a warning order that new detainees might be heading in our direction, but our responsibility will be to integrate them in effectively," said Admiral Kurt Tidd, who oversees the military's Southern Command that includes Guantanamo.

Guantanamo, once home to 780 prisoners detained for their alleged links to al-Qaeda and the Taliban, now holds 41 detainees. 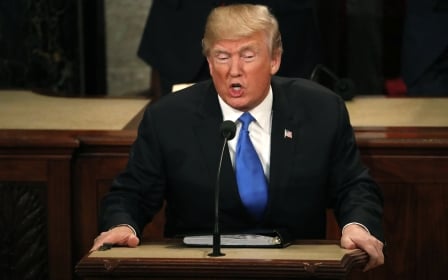