Thousands protest against Palestinian Authority in West Bank following Banat's death, which Lawyers for Justice described as an 'assassination' 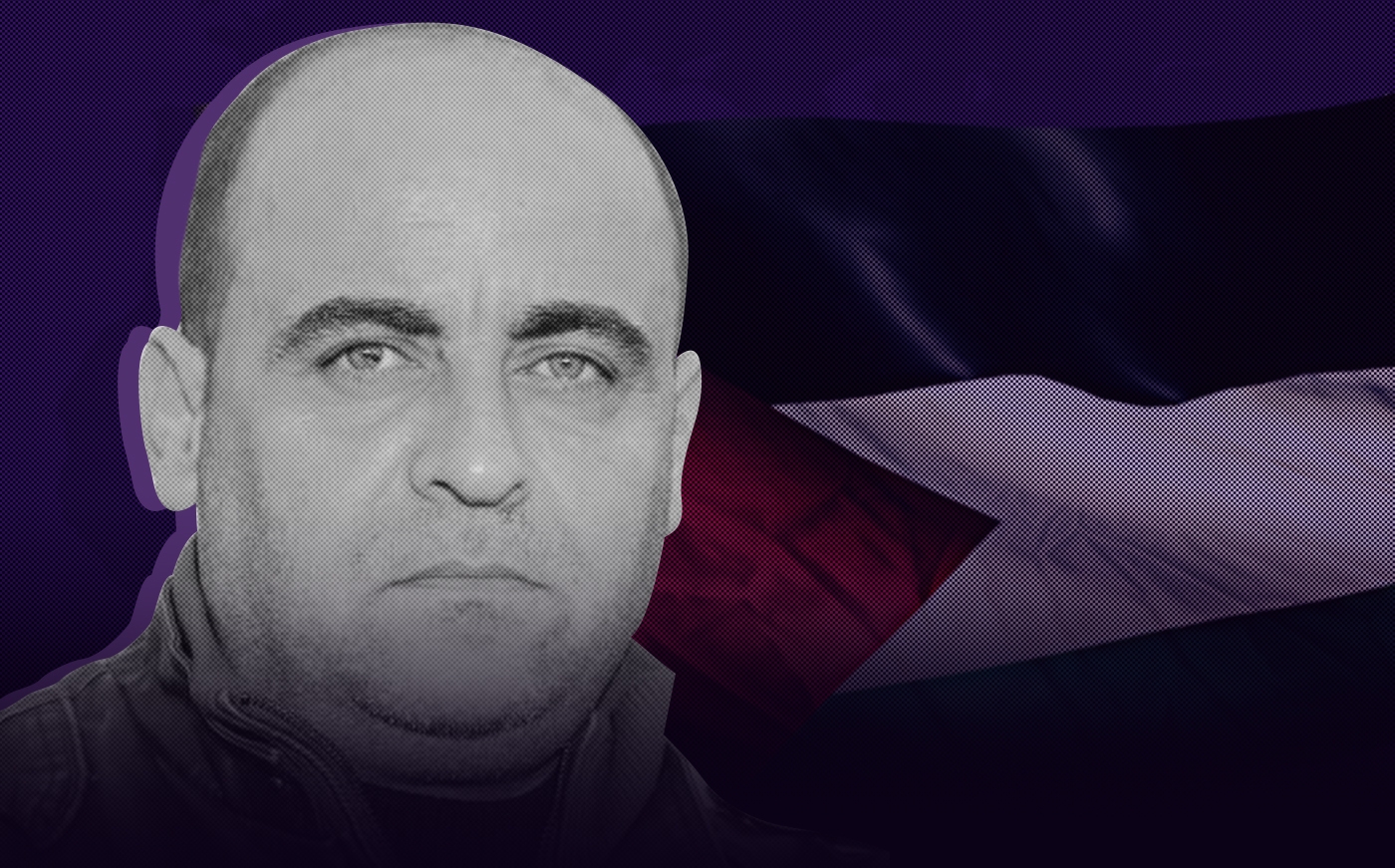 Banat was well known for his criticism of the PA leadership and had been arrested several times in the past by Palestinian security forces (Hossam Sarhan/MEE/Facebook)
By
Shatha Hammad
in
Ramallah, Occupied West Bank

Nizar Banat, a leading Palestinian activist and critic of the Palestinian Authority (PA), died early on Thursday after a raid by PA security forces on his home in Dura in the southern occupied West Bank district of Hebron.

In a statement, Governor of Hebron Jibreen al-Bakri said that Banat's "health deteriorated during the arrest". However, Banat's family said officers had beaten him during his detention.

The arrest took place amid an ongoing security crackdown by the PA on political opposition and social media users in the West Bank. Banat was well known for his criticism of the PA leadership and had been arrested several times in the past by Palestinian security forces.

Muhannad Karajah, a member of the Palestinian Lawyers for Justice group, told Middle East Eye that Banat had called him on Wednesday and told him that he was being subjected to threats by the PA's intelligence service, who had demanded that he stop his criticism of the authority.

Banat has for months been posting videos on Facebook, in which he lambasted PA President Mahmoud Abbas and other senior PA and Fatah officials.

Earlier this week, he posted a video in which he strongly criticised the PA over its now cancelled vaccine exchange with Israel.

Ammar, a cousin of Banat speaking on behalf of the family, told MEE that about 25 officers and a member of the preventive security and general intelligence stormed the house around 3:30am after detonating the doors open.

He added that officers stormed the room in which Nizar was sleeping and immediately sprayed him with pepper spray to his mouth and nose.

The cousin said they beat Banat severely with iron and wooden batons. Nizar being in a semi-conscious state, Ammar said security forces then dragged him, stripped him of his clothes, and took him away in a military vehicle.

PA officials announced on Thursday that Prime Minister Mohammad Shtayyeh had ordered an investigation committee - led by Minister of Justice Mohammad Shalaldeh and including a physician appointed by the Banat family, a human rights official, and a security official - into Banat’s death.

But Banat's death has been met with anger on the streets of the West Bank, as well as criticism from human rights organisations and Palestinian factions, which have called for an independent investigation.

Hundreds of Palestinians were demonstrating in Ramallah on Thursday afternoon, shouting "Leave, leave Abbas" and "The people want the downfall of the regime", with security forces beating protesters with batons and firing tear gas.

Karajah said he had expected that Banat would be arrested, as he had several times before due to his positions and social media posts opposing the PA.

All eyes on the West Bank today as people will be taking to the streets in anger at the killing of activist Nizar Banat at the hands of the internationally funded Palestinian Security Forces. #nizarbanat

“What happened with Nizar Banat is an assassination," the lawyer said. "Today, what Palestinian activists and human rights defenders can expect are assassinations.

"By killing Nizar Banat, the [Palestinian] Authority confirms today that it is a repressive authority that threatens any human rights defender, and every person is subjected to a process of political arrest.”

Karajah added that political critics of the PA were tortured inside prisons run by the PA following the recent waves of arrests, which he said had reached about 50 detainees during its climax.

Banat was a candidate on the Freedom and Dignity electoral list for the PA parliamentary elections, which were supposed to take place on 22 May.

In response to Abbas’ decision to call off the parliamentary and presidential elections, slated for 31 July, Banat and his list published a statement asking EU courts, including the Court of Human Rights in Strasbourg, to order an immediate cessation of financial aid to the authority.

'They did not transfer Nizar to the hospital'

"After he was examined by doctors, he was pronounced dead," Bakri said. "The public prosecution office started procedures in accordance with the law immediately after it was informed of the incident."

Ammar said Banat's family had immediately contacted their acquaintances in various security services stations in Hebron after Banat was taken away, but were unable to obtain any information about his whereabouts, only being informed that he had not been transferred to the headquarters of the security services.

“An hour and a half after the arrest, news spread through WhatsApp groups stating that he had died as a result of a health setback, and they did not officially inform us as a family of any information about his death until now," Ammar said.

Ammar said a delegation from the family went to Alia Governmental Hospital, where security services had announced his death, but did not find his body.

"The announcement of his death in Alia was a ruse. They did not transfer Nizar to the hospital, nor did they transfer him to any of the security headquarters," he said. “Until this moment, five hours after his death, we do not know the location of the body of our son Nizar.

"The Palestinian Authority is hiding the body in order to manipulate the facts about his death.”

Ammar told MEE that Banat had been shot by unidentified assailants two months ago in his house in Dura, with the family had finding remnants of 60 bullets on the scene.

“After that, we received threats from officers in the security services saying that Nizar would be assassinated, but we ruled it out... but today they carried out what they promised and assassinated Nizar,” said Ammar.

The Palestinian Authority got rid today of one of its fierce critics, Nizar Banat. His family testified he was severely beaten with sticks & iron objects on his head during his arrest.
Liberation does not come in parts.. it's a whole, from our colonisers & internal oppressors. pic.twitter.com/xK3Tk9tqIC

The family said it was demanding the disclosure of the full facts surrounding Banat's death and who was responsible.

“We demand from the top of the pyramid in the Palestinian Authority to the smallest member in it to reveal what they did with Nizar’s body," Ammar said. "We demand the formation of an international investigation committee headed by a doctor from the family and a doctor from the Human Rights Commission, and people chosen by the family, and that the autopsy not take place in the institutes affiliated with the authority, but in the Abu Kabir Forensic Institute [in Tel Aviv].

“We want to take our right by law, and our son’s blood will not be shed in vain... We will know who took the decision to assassinate him and who carried out the assassination. And both of them we want to be punished,” he added.

'We call for the killers to be prosecuted'

Banat's death has been met with anger on the streets and condemnation from human rights organisations and Palestinian factions.

The Popular Front for the Liberation of Palestine (PFLP) said in a statement that it held the PA responsible for Banat's death.

"The arrest and then the assassination of Nizar again raises questions on the nature of the role and function of the PA and its security services, and its violation of the democratic rights of citizens through the policy of silence, prosecution, arrest and murder," the PFLP said.

Shocked and saddened by the death of activist and former legislative candidate Nizar Banat following his arrest by the PA security forces last night. Our thoughts go to his family and loved ones. Full, independent, and transparent investigation should be conducted immediately.

Sami Abu Zuhri, a member of the Hamas movement's political bureau, said: "We consider that [PA] Prime Minister Mohammad Shtayyeh bears the primary responsibility for the murder of activist and parliamentary candidate Nizar Banat, and we call for the killers to be prosecuted."

Ayed Yaghi, an official of the Palestinian National Initiative (PNI) movement in the Gaza Strip, said in a statement that the PNI condemned Banat's arrest and subsequent death".

Yaghi called for the formation of an independent investigation committee made up of people known for their independence and integrity in order to conduct a comprehensive investigation into what happened and to ensure that those responsible for Banat's death were punished.

The Palestinian Independent Commission for Human Rights said that it considered the activist's death to be a very serious development.

It indicated that it had begun investigating and collecting information about the death and would participate in the autopsy through a forensic doctor delegated by the commission, adding that the results of the investigation would be announced immediately.

The Palestinian NGO Network meanwhile warned against the continuation of the PA's crackdown on opposition, saying "it had the potential to turn into a police state governed by a system of repression and a disregard for people's lives and their dignity in the reality of the occupation."

It also called for the formation of an immediate impartial investigation and for Abbas to stop all infringements on civil rights, public freedoms, and the dignity of citizens.

The Euro-Mediterranean Human Rights Monitor also expressed its deep shock at the circumstances of Banat's death.

The organisation demanded the opening of a serious, urgent and independent investigation into the case, since all the circumstances pointed to a deliberate "process of liquidation" to suppress a voice strongly opposed to the policies of the PA.