Can Pakistan bounce back after Malaysia snub? It's up to Imran Khan

Withdrawing from summit of Muslim countries last month under Saudi pressure was a diplomatic disaster, say diplomats and analysts Pakistan’s decision to pull out of a summit of Muslim countries in Malaysia under pressure from Saudi Arabia has left the country vulnerable in the wake of its diplomatic disaster, Pakistani diplomats and analysts say.

“The Saudis told us not to go. It’s as simple as that. Khan should have sent a low-level delegation. He did not,” a Pakistani diplomat, who spoke on condition of anonymity, told Middle East Eye. “Once you give one concession to the Saudis, there is no end.”

'Once you give one concession to the Saudis, there is no end'

Khan had accepted an invitation to attend from Malaysian Prime Minister Mahathir bin Mohamad and is thought to have been among leaders who suggested that the summit be held in the first place.

Saudi Arabia, however, is understood to have been concerned that the summit was a move to form a new body to replace the Jeddah-based Organisation of Islamic Cooperation (OIC) and challenge the kingdom’s leadership in the Muslim world.

And eventually, Khan decided not to attend the summit after he was summoned to Riyadh for talks with Saudi Crown Prince Mohammed bin Salman.

The decision to withdraw has drawn widespread criticism from other Muslim member countries and seen as a humiliating episode both inside and outside of Pakistan.

Turkish President Recep Tayyip Erdogan told reporters at the end of the summit that Saudi Arabia had threatened to withdraw money it had already given to Pakistan and replace Pakistani foreign workers in the kingdom with Bangladeshis.

Both Pakistan and Saudi Arabia released statements denying the allegations. Whatever the case, reputational damage among fellow Muslim countries may already have been done.

A Turkish government official who attended the summit and spoke on condition of anonymity, told MEE: “Look, we have to keep good relations with Pakistan, but its failure in not turning up has not gone unnoticed. It’s a subordinate now.”

Abdul Basit, a former Pakistani ambassador, told MEE that the government had committed to the conference in haste and should have thought clearly through the consequences beforehand.

“It did not weigh up the pros and cons. Then when the Saudis raised concerns, they subsequently came under pressure for obvious reasons,” he said.

The benefits to Pakistan of trying to build a group to challenge the OIC are far outweighed by the country’s financial concerns, including protecting foreign workers earning a living in the kingdom, he added.

“Many Pakistanis are working there so they couldn’t be seen as a valid voice to counter the OIC. Their economic interests topped everything else.”

Meanwhile, Khan’s concessions have raised concerns among observers, with some even comparing the prime minister with former Lebanese president Saad Hariri.

In 2017, Hariri resigned on Saudi state television after he was abruptly summoned to the kingdom which was reportedly unhappy with the power that Hezbollah – and therefore rival Iran - had in his country. He later rescinded his decision, but resigned this October in the face of mass protests in the country.

Could Khan be heading along the Hariri path, MEE asked Michael Kugelman, deputy director of the Asia Program and senior associate for South Asia at the Washington, DC-based Wilson Center.

“Imran Khan has been very careful - more careful than most of his recent predecessors - to try to position Pakistan as a neutral player in the Saudi Arabia-Iran dispute. I don't think he would want to appear to be overtly siding with, if not overtly jumping into the camp of, the Saudis,” he told MEE.

“Still, Khan's balancing act is a particularly tall order now, given how Saudi leverage has increased over Islamabad due to the Pakistani economic crisis.”

“The kingdom of Saudi Arabia does not want the international community to view Pakistan as favouring Turkey or Iran,” Basit said.

Kugelman added: “Given the complex geopolitics of the Middle East, and given how Riyadh's many rivals will always seek to undercut it, we may be seeing new efforts afoot to undermine the Saudi-Pakistani relationship.”

Hanging in the balance

Analysts and diplomats say Pakistan ought to be able to negotiate with Saudi Arabia on key issues as it has done successfully in the past. In 2015, for example, the Pakistani parliament rejected a request from the kingdom that Pakistan send troops to Yemen.

However, even before the Malaysian summit episode, Imran Khan’s ability to get what he wanted was already in doubt.

Of course, one main reason is the pressure that Khan is under as a result of Pakistan's economic challenges. He told MEE in late 2018, soon after the murder of Jamal Khashoggi, that he was shocked by the journalist's killing, but his country needed to prioritise relations with Saudi Arabia because of its financial difficulties. Since then, the country has secured more than $9bn in loans from Saudi Arabia, the United Arab Emirates and China, while also imposing painful austerity measures in order to tap into a $6bn International Monetary Fund bailout.

In this position, Khan has struggled to assert Pakistan's needs in the relationship. For example, more than 3,000 Pakistani prisoners are languishing in Saudi jails, according to recent Pakistan’s foreign ministry figures. Human rights advocates say the kingdom has executed more Pakistanis than any other foreign nationals in recent years.

During a visit to Islamabad in February, Saudi Crown Prince Mohammed bin Salman said he had ordered the release of more than 2,100 Pakistanis from Saudi prisons. In August, Pakistani government officials said over 1,000 prisoners had been repatriated.

But human rights organisations complain that no details about those returned have been shared publicly, and vocal concerns continued to be raised about the plight of Pakistanis in Saudi prisons.

However, one point of leverage Pakistan could use to gain an upper hand with Saudi Arabia is through its significant military footprint in the kingdom.

Pakistan could use these military ties to leverage greater power over Saudi Arabia, say observers, for example if Islamabad opted to increase its military support to Qatar.

“Yes, Pakistan could have easily created a win-win situation for itself by the implementation of this strategy,” said Basit. “The Saudis are dependent on us militarily.”

The future is up to Khan, said Syed Talat Hussain, a Pakistan-based journalist.

“The Saudis have carefully calculated how vulnerable Imran Khan is financially. But Khan should also realise the opportunities available to him.

“Khan lacks the political acumen which supported former prime minister Nawaz Sharif who was heavily supported by the Saudi kingdom. Therefore, the question of Pakistani leverage hangs in the balance under this leadership.”

Analysis
'Bad news for Riyadh' as Menendez set to chair US Senate foreign relations
Analysis
Pompeo’s dinner with Mossad was about egos, not Syria strikes
Arab Spring
Why Israel is now delighted about the Arab Spring 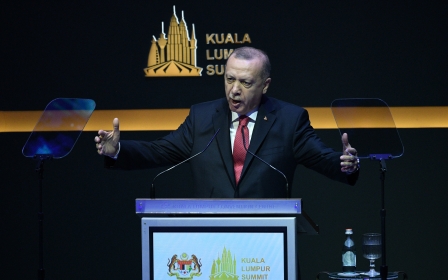