Activists say resolution, while unlikely to pass, could gain traction over several years in similar way to Congressional recognition of Armenian Genocide 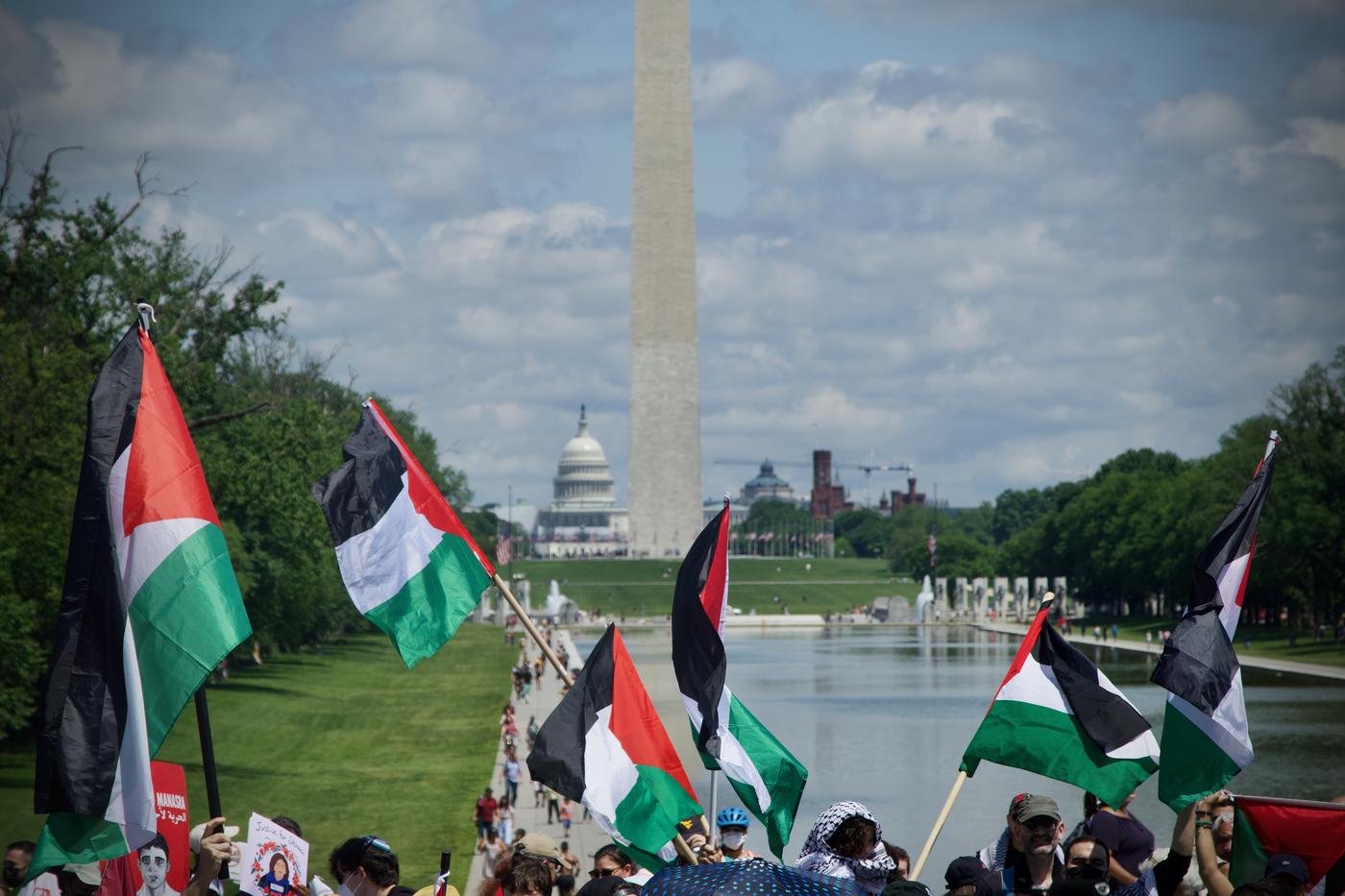 People wave Palestinian flags on Nakba Day in Washington DC on 15 May (Umar Farooq/MEE)
By
Zainab Iqbal
, Umar A Farooq

Pro-Palestine activists have welcomed a bid in the US Congress to recognise the Nakba, a term used to describe the forced displacement of hundreds of thousands of Palestinians in the lead-up to the establishment of the state of Israel in 1948.

The resolution was submitted in the House of Representatives on Monday by Congresswoman Rashida Tlaib, a day after Palestinians marked the Nakba's 74th anniversary.

Co-sponsored by Ilhan Omar, Alexandria Ocasio-Cortez, Cori Bush, Betty McCollum, Marie Newman, and Jamaal Bowman, the resolution calls on the US to reject efforts to enlist, engage, or associate the US government with the denial of the Nakba; encourage education of the Nakba; support the provision of social service to Palestinian refugees, and support the implementation of Palestinian refugees' rights.

"The scars borne by the close to 800,000 Palestinians who were forced from their family homes and their communities, and those killed are burned into the souls of the people who lived through the Nakba," Tlaib said in a statement.

"As the assassination of Shireen Abu Akleh last week made all too clear, the violence and war crimes are an ongoing and ever-present assault on the existence and humanity of the Palestinian people. 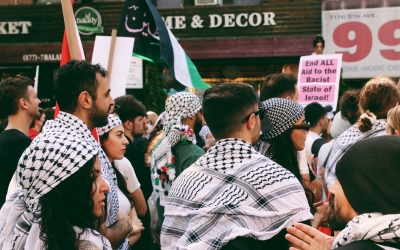 What Is Nakba Day?
Read More »

"The Israeli apartheid government's ongoing ethnic cleansing seeks to degrade Palestinian humanity and break the will of the people to be free. Fortunately, as Palestinians and their allies prove time and time again, we will persist no matter the circumstances until peace, freedom, equity and respect for all people are secured and protected."

Noura Erakat, a Palestinian-American human rights attorney and an associate professor at Rutgers University, said the issue of whether the resolution would pass was not as important as the fact it had been introduced.

"Even if it doesn't pass, it becomes a moment of the historical record and it becomes another seed planted, which indicates the inevitability of its passage, which will continue to take time," she told Middle East Eye.

She explained that the decision to commemorate the Nakba was introduced "in the very heart of the political establishment that sustains Israeli settler colonialism and apartheid", which is itself symbolic.

"This is the same body that provides unequivocal military, diplomatic and financial support to Israel that enables it to entrench its settlement enterprise and withstand international scrutiny. And now we're witnessing this iteration of being able to actually see and acknowledge the word Nakba as policy and as a moment of reckoning with these historical wrongs," she said.

"It doesn't have the practical effect that one would like to see, but it's an indication that momentous changes are happening on the ground and are happening in American public opinion."

'A conversation that could not be had before'

Israel has historically held bipartisan support within the halls of the US Congress, but in recent years, the close American ally has been the target of increased criticism among progressive lawmakers over its treatment of Palestinians.

But while lawmakers have introduced several pieces of legislation defending Palestinians, including bills condemning the detention of children, no laws have been passed.

Still, George Bisharat, a professor at the University of California Hastings College of the Law, noted that the number of co-sponsors the Nakba resolution has is a sign of a growing movement to recognise the plight of Palestinians.

"Eight [co-sponsors] is not an insignificant number, and I expect that those numbers are going to grow over time. Maybe slowly, but they're going to grow," Bisharat told MEE.

Yousef Munayyer, a Palestinian-American writer based in Washington DC, says even if the resolution is unable to pass now, it can be re-introduced and may eventually pass when support for the Palestinian cause runs high, similar to what happened with a resolution to recognise the Armenian Genocide:

In 2019, Congress designated the 1915 mass killings of about 1.5 million Armenians by the Ottoman Empire as a genocide. Lawmakers had previously avoided supporting such a resolution because of the US relationship with Turkey, an ally that denied that the atrocities amounted to genocide.

Just two months later, the US Senate also voted unanimously to recognise the Armenian genocide as a matter of American foreign policy.

"I don't think that there should be an expectation at this point that this resolution passes. This is about having a conversation that previously could not have been had in this space, and forcing conversation," Munayyer said.

"The Armenian Genocide, for example, was held up at the Congress for years because of politics. So it takes people pushing this 'uncomfortable' conversation forward without an expectation that it's going to immediately pass."

'All eyes on Palestine'

According to Palestinian-American activist Linda Sarsour, the decision by Tlaib - who has been a been a member of Congress since 2019 - to now introduce the bill is all about strategy.

"It's all eyes on Palestine right now after the assassination of Shireen Abu Akleh, as well as the expulsion of Palestinians from Gaza and Sheikh Jarrah," she told MEE.

Abu Akleh, a highly respected Al Jazeera Arabic journalist, was shot in the head by Israeli snipers last week during her coverage of an Israeli raid in Jenin in the occupied West Bank. Israel has said it was unclear who shot her.

Her killing sparked outrage throughout the region, with governments and rights groups across the world condemning her killing.

"When you have all eyes paying attention to stories coming out of Palestine, it's a great moment to capture that momentum," Sarsour said.

"This is about understanding who really in Congress is committed to human rights, who in Congress believes in the plight of the Palestinian people.

"It forces members of Congress who profess to be pro-Israel to also have to recognise the forced displacement of the Palestinian people. It forces people who are pro-Israel to have to come to the realisation in a more public manner, that in order for the State of Israel to be created, there was an indigenous population that had to be displaced. That at some point villages had to be destroyed."

According to Atalia Omer, a professor of religion, conflict, and peace studies at the University of Notre Dame, the timing of Tlaib's resolution relates to a slow but clear shift in Congress.

"It has become harder and harder to tell a story about self-defence when the images that circulate are those of Israeli aggression and brutality," she said.

"It is indeed time for the US to come to terms not only with the Palestinian catastrophe but also grapple with its own complicity, especially through the military and financial support of Israeli militant and settlement policies."

Israel is the largest recipient of US military aid, receiving $3.8bn from the US government each year, the majority of which goes to military assistance.

Tlaib's resolution also comes amid a concerted push by international rights groups, which has seen them label Israel an apartheid state.

Additionally, in March, the UN special rapporteur on human rights in the occupied Palestinian territories submitted a report to the UN Human Rights Council (UNHRC), concluding that the situation in Israel and the occupied territories amounted to apartheid.

"I think they're being confronted with the facts more and more. This is something that people have been saying for decades, Palestinians in particular," Sana Siddiq, the manager of policy and advocacy campaigns at the US Campaign for Palestinian Rights (USCPR), told MEE.

She said the resolution was about recognising what Palestinians had endured, and this would eventually open doors for the right of return.

Israel views this demand as beyond consideration because it would, for all practical purposes, undermine its founding principle as a state created exclusively for the Jewish people.

This week marks the 74th anniversary of the UN's Resolution 194, granting Palestinians the right of return, one of the three issues integral to the Middle East peace process.

"There needs to be a path towards Israel's accountability," Abdel Razek said.

"The US plays a very harmful role here and should stop providing billions in military aid to Israel, which maintains brutal apartheid against Palestinians." 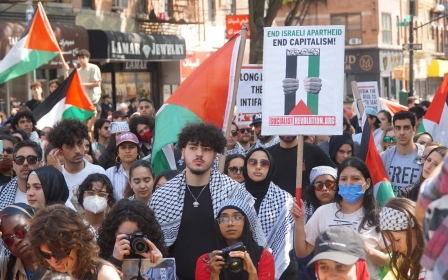 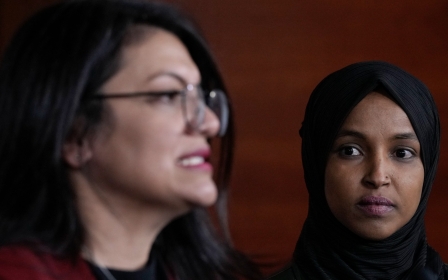 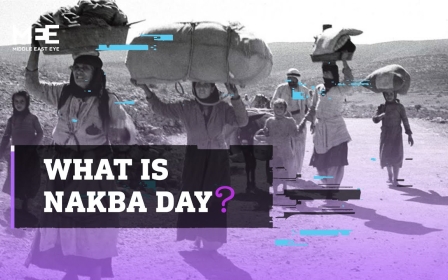 48 Palestinians
What Is Nakba Day?