Reema Saad and her son Zaid did not survive Wednesday's air strike. Her two-year-old daughter Mariam is still missing under the rubble 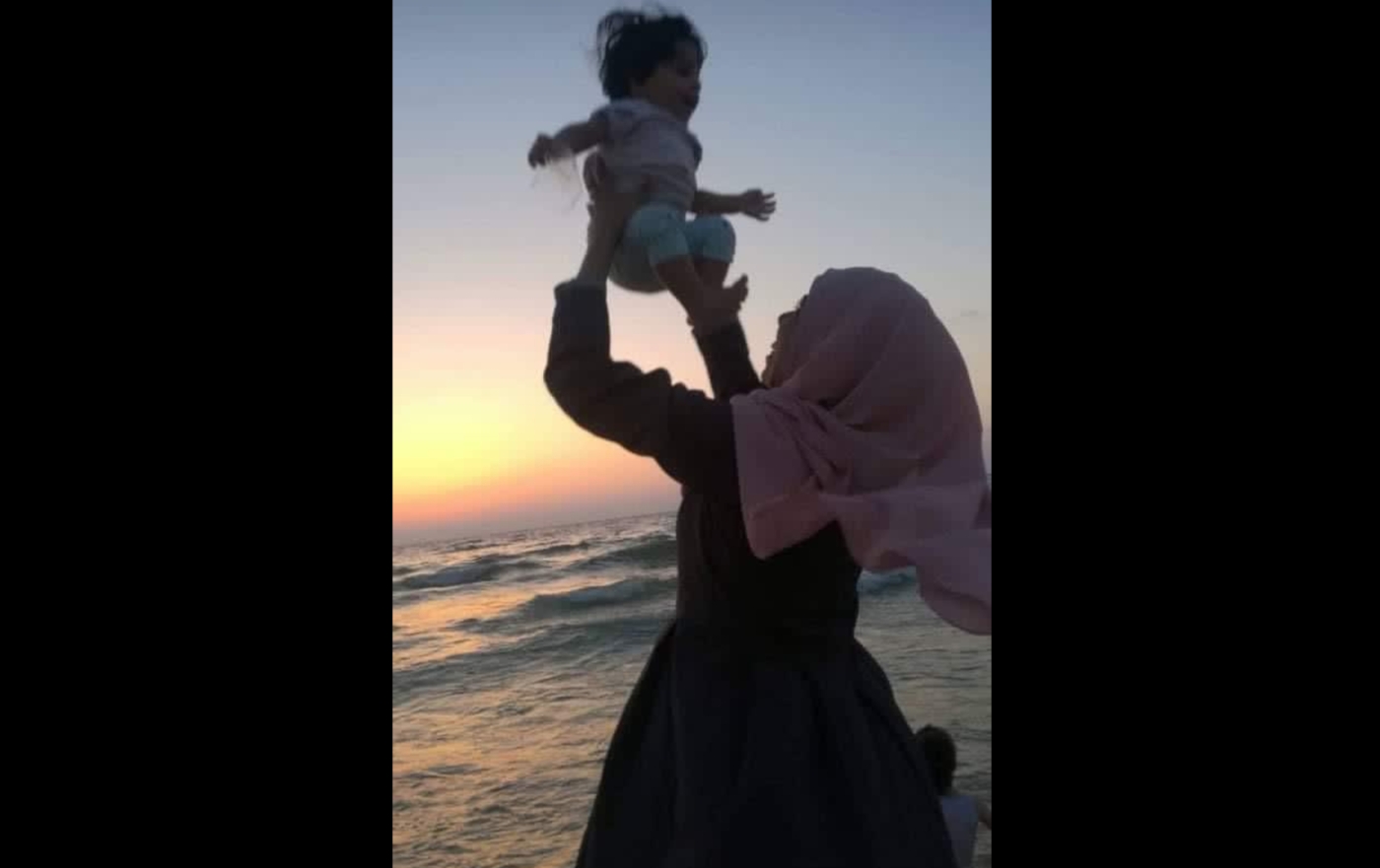 Relatives describe Reema as a loving mother and journalist dedicated to helping others (Handout)
By
Maha Hussaini
in
Gaza City, besieged Gaza Strip

Reema Saad had been hoping for a baby girl.

The 30-year-old Palestinian journalist was four months along in her third pregnancy, and was due to find out the sex of her baby a few days after Eid al-Fitr, marking the end of the Muslim holy month of Ramadan.

“When she found out she was pregnant, Reema was very happy,” Samar Saad, Reema’s sister, told Middle East Eye.

“Her son Zaid hoped the baby would be a boy so that he would call him Zain, but Mariam wanted a little sister, and cried every time we teased her telling her it was a baby boy.”

But at 1.50am local time on Wednesday, as the family was fast asleep in their apartment in the Gaza City neighbourhood of Tal al-Hawa, an Israeli air strike hit the residential building.

Reema and four-year-old Zaid were killed on the spot, while Reema’s husband, 30-year-old Mohammed al-Telbani, was taken to a hospital in intensive care.

Reema and Zaid are among the 119 Palestinians killed by Israeli air strikes in the besieged Gaza Strip since Monday, amid growing violence across the occupied Palestinian territories since last week.

According to the Gaza-based Ministry of Health, the 119 dead include 31 children and 19 women. A further 830 have been injured in the bombardments, as countless families in Gaza like Reema’s reel from the shattering loss of loved ones whose promising futures abruptly came to an end.

Samia Saad, Reema's mother, had urged her daughter to spend the night in her house - but she told MEE that Reema had decided to stay home, convinced that her residential neighbourhood would not be targeted.

“She said she wanted to stay with her husband and that her home was located in an overcrowded and safe neighbourhood,” Samia said.

“Before the attack, we video-chatted and the children showed me how they had moved their mattresses to sleep in their parents’ bedroom because they were scared. They wished me a good night and went to sleep.”

Samar said that Reema, her husband and children were all sleeping when the air strike hit their home.

“Reema did not like to stay up late because her work was exhausting,” she said. “She always slept early and did not expect that her neighbourhood would be targeted.”

Residential towers and buildings housing dozens of media offices have been among the buildings targeted by Israeli forces in Gaza City - including two completely leveled to the ground.

Samia recalls the terrifying moments trying to find out the fate of her daughter.

“My son woke me up and asked me to call Reema to make sure that she was okay, after they heard news that an apartment building in front of the al-Yazji bakery had been targeted,” she said. “I called her repeatedly but she did not pick up. I sent her online messages, but the conversation showed that she did not have an internet connection. So I got dressed and rushed to her place with my son.”

When she arrived in the neighbourhood, Samia was informed that her daughter’s family had been taken to al-Shifa hospital.

“They told us that her husband was in the intensive care unit. When I asked about my daughter and her children, they said that we might need to check the morgue,” she continued. “They did not allow me to see her because they said I would break down. So my son saw her and confirmed her identity. He told me that I could not handle seeing her like this. Her skull was broken open and her brain exposed.”

Paramedics told Reema’s family that Mariam’s small body, still missing, may have been torn to pieces under the rubble.

“I couldn’t see her or say goodbye,” Samia said. “I asked them to at least bring her home one last time before they bury her. They brought her, but did not allow me to open her coffin.”

Grieving the fresh loss of her daughter and at least one of her grandchildren, Samia, 51, is reminded of her brother, who was killed by Israeli forces during the First Intifada, and her husband, who died in 2009 due to lack of drugs and medical equipment in Gaza under the ongoing Israeli-led blockade.

“My mum was very attached to Reema. She always told us that she did not differentiate between us, but that Reema was special. That’s why Reema used to visit mum daily, and when they could not see each other due to Reema’s work and busy life, they would video-chat on messenger,” she said. “I once told Reema that I was thinking of living abroad, but she begged me not to leave her alone."

Reema's sister recalls how excited her nephew and niece had been about her own months-old daughter.

“Zaid and Mariam were waiting for my daughter to grow up so that they could play with her. But now they are gone before she could know them. They have left me and my daughter alone.”

Samar, who lives in the southern Gaza district of Khan Younis, was unable to travel to Gaza City in time to attend Reema and Zaid’s funerals amid the ongoing threat of air strikes.

“My mum asked me not to come because of the intensive shelling. She told me that she did not want to lose another daughter,” she said. “We are still in complete shock. It is a nightmare that I wish I could wake up from. I never thought I would lose her.”

Amid the grief of losing her sister, Samar has had no respite. As she was speaking to MEE, she received the news that another air strike had hit her family’s neighbourhood in western Gaza City.

“God, my heart is boiling, they have just targeted the Rabat college besides my family’s home,” she said.

It took her several minutes to confirm that her family was okay, with neighbouring homes only suffering material damage.

The loss of a ‘pure friend’

As Samar felt light years away from her family only a few kilometres away, the third Saad sister, Sally, found out about Reema’s death in Belgium, where she has lived for the past year and a half. 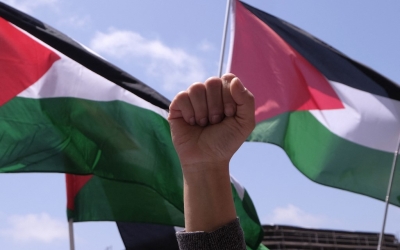 From north to south, Palestinians are fighting to reclaim our voice
Read More »

“I was sleeping when Reema’s home was bombed. I woke up to my husband talking [on the phone],” Sally told MEE. “He did not tell me the news immediately. He waited until it was confirmed.”

Sally says that she feels devastated being so far away and unable to be with her family.

“I cannot support my mum and siblings because I am not around them; I can’t even talk to them often because of the air strikes," she explains. “We used to video-chat every day; me, mum, Samar, Reema and her children. Now, I can only talk to mum and my siblings when they are able to, due to the intensive shelling.”

Sally wants to remember her sister as a caring mother, but also as a dedicated journalist, recalling her last conversations with Reema ahead of Eid celebrations.

“She was constantly asking us about the clothes she should buy for her children for Eid - but she was also very ambitious, always discussing her plans to start a project assisting people in finding freelance jobs,” Sally says.

Between 2000 and 2020, Israeli forces have killed at least 46 Palestinian journalists, according to the Palestinian Journalists Syndicate. Sixteen of them were killed during Israel’s 2014 war on Gaza alone.

Razan al-Saafin, one of Reema’s close friends, told MEE that she loved to work in media, but also was a known figure in the field of entrepreneurship as a coach and influencer.

“Our friendship was a unique relationship, she always told me how she cherished me. We were pure friends. She would always tell me about her worries,” Razan said.

“Since I heard the news, I have been thinking about opening the messenger [app] and writing to her ‘May God bless your soul’ - but then I remember that she will not reply.” Occupation
Gaza: 'The sounds of screaming children were louder than the missiles'