For Palestinians in Gaza, Oslo Accords are a bitter and distant memory

‘We thought the accords would alleviate Palestinian suffering and finally let us live in peace. All we got is continuous restrictions and humiliation.’ 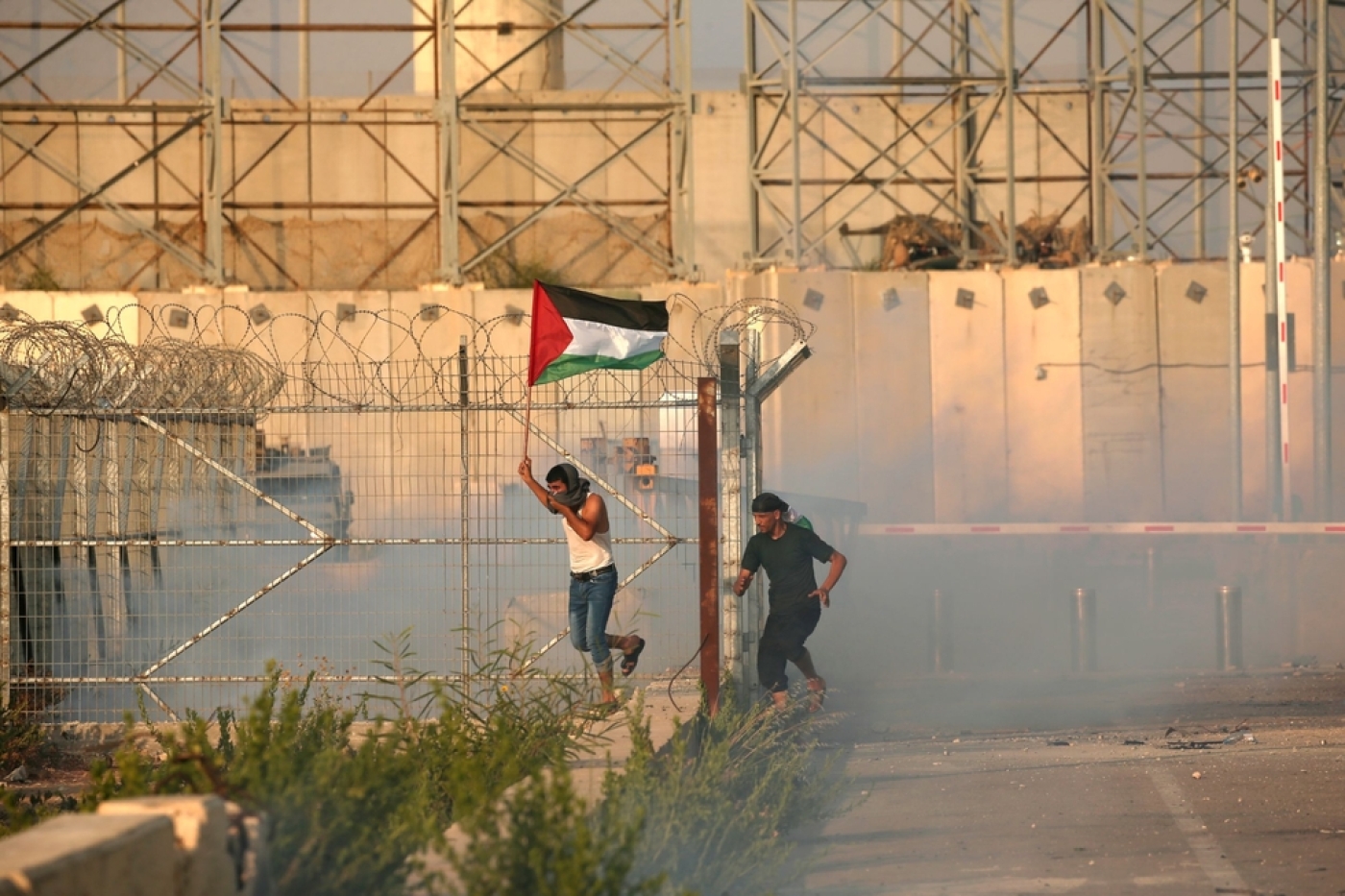 For Palestinians trapped in Gaza, not only did Oslo fail to deliver on its engagements, but the 25 years since the accord’s signature have seen a dramatic deterioration of the status quo (AFP)
By
Maha Hussaini

When he was 25 years old, Ziyad Jarbou watched the signing ceremony of the Oslo Accords on television from the Gaza Strip.

Jarbou remembers watching the iconic handshake between Israeli Prime Minister Yitzhak Rabin and Palestine Liberation Organisation Chairman Yasser Arafat, hoping that it would not “exacerbate the political and economic situation”.

Today, at age 50, the Palestinian fisherman feels his fears have been justified.

“You cannot sign an agreement with your occupier and believe it will be for your own good,” he told Middle East Eye. “We knew since day one that everything was going to gradually change for the worse.”

While the quarter-century of the 1993 Oslo Accords marks a bitter anniversary for millions of Palestinians who have seen little to no progress achieved in their aspirations for statehood, residents of Gaza are grappling with ever-deteriorating conditions.

What Oslo promised in Gaza

While the Oslo Accords were deliberately left vague with regards to some of the most problematic issues of the Israeli-Palestinian conflict - including Israeli settlements, the fate of Palestinian refugees, and a timeline for the creation of an autonomous Palestinian state - Israel committed to a number of concessions in the Gaza Strip.

Perhaps most significantly, the Oslo Accords paved the way for an Israeli withdrawal from Gaza to transfer the enclave under the jurisdiction of the newly formed Palestinian Authority.

While partial withdrawal began in 1994, it was only in 2005 that Israeli settlements in the strip were fully evacuated. Yet despite there being no official permanent Israeli presence in Gaza today, the UN still considers the territory to be occupied in the absence of a Palestinian state.

Meanwhile, the 1995 Oslo Accords, also known as Oslo II, promised safe passage between Gaza and the West Bank, and greater freedom of movement for Palestinians - epitomised by the inauguration of the Yasser Arafat International Airport in Gaza on 24 November 1998.

These hopeful advances, however, were short lived.

The airport was destroyed by Israeli forces during the Second Intifada in the early 2000s. In the wake of Hamas’ 2006 victory in Palestinian legislative elections, Israel implemented a crippling blockade of the Gaza Strip, which still stands 11 years later.

For Palestinians trapped in Gaza, not only did Oslo fail to deliver on its commitments, but the 25 years since the accord’s signature have seen a dramatic deterioration of the status quo.

Cut off from family and the outside world

Gaza City resident Abu Hani al-Khatib has not seen his relatives in the occupied West Bank for more than 20 years.

“I cannot say that our life before the Oslo Accords was smooth,” the 84-year-old barber tells MEE. “Life under occupation has never been easy. But it has changed markedly and in unexpected ways.

“We feel today as if we, in Gaza, live in a different and completely separate country.”

Khatib recalls how he used to regularly visit his cousins in the West Bank, but that such visits have become impossible, particularly since the beginning of the siege.

‘We feel today as if we, in Gaza, live in a different and completely separate country’

“I have been trying to get an exit permit through the Erez crossing for the past ten years, and it is always the same response: Permit denied for security reasons,” he says.

While Oslo was supposed to pave the way for a united Palestinian state, in effect Palestinians living in historical Palestine have since found themselves falling into four distinct categories: Palestinians citizens of Israel, and residents of the West Bank, East Jerusalem, and Gaza.

Israeli-imposed restrictions on Palestinian movement between each territory have been compounded in Gaza, where the Israel- and Egypt-imposed blockade has made it nearly impossible for residents to leave.

For Khatib, the Oslo Accords were “false promises that allowed for more restrictions”.

“Some of us were naive enough to have thought the accords would alleviate Palestinian refugees’ suffering and finally let us live in peace,” the elderly man says.

“All we got is more control of all aspects of our lives and continuous restrictions and humiliation.”

No such thing as open waters

Jarbou, the man who watched the Oslo Accords signature on television when he was 25 years old - half a lifetime ago - had first started sailing on the Mediterranean Sea at a very young age.

“I have been working as a fisherman since I was only 10 years old. I helped my father and siblings secure a living for our family,” Jarbou recalls, as he untangles his net at the Gaza port.

“Although our living circumstances were difficult back then, we have never experienced anything worse than the situation we are living today.”

Under the Oslo Accords, Palestinians in the Gaza Strip were promised a designated fishing zone extending  20 nautical miles off the coast.

However, the blockade has turned such horizons into a distant memory.

“In the early 1990s, before the Oslo Accords were signed, I remember that my father and I would reach 26 nautical miles,” Jarbou says. “My sons do not believe me when I say that. They have never reached further than nine nautical miles at best.”

Jarbou, who taught his own four sons to fish, thinks their future will be “unstable and fuzzy” because of the Israeli restrictions on the designated fishing zone - which often fluctuate between nine and three nautical miles according to perceived levels of violence directed against Israel from the enclave. Such restrictions have been denounced by rights groups and the UN as amounting to collective punishment.

Since 2000, the number of registered fishermen in the Gaza Strip has fallen from 10,000 to 4,000 due to these restrictions, according to the Euro-Mediterranean Human Rights Monitor.

“Israeli naval forces chase and detain us, seize our equipment, and open fire toward our boats on a regular basis, even when we do not reach six nautical miles,” Jarbou says. “The Oslo Accords are merely dead letters when it comes to Palestinians’ rights.”

Negotiations as an ‘anaesthetic syringe’

Twenty-five years after the Oslo Accords, Palestinians seem to believe that they have been living in an “illusion of peace”.

Abd al-Hameed Sabra, a political researcher in Gaza, says the Oslo Accords were “unfair” for Palestinians, as they allowed Israel to keep control of the Palestinian territories occupied since 1967, and only required that Israel recognise the Palestinian Liberation Organisation, not the Palestinian people nor their right to self-determination.

“Palestinians hoped the Oslo Accords would bring them recognition of their national character and a dignified life after long years of suffering,” Sabra told MEE. “Twenty-five years later, they got neither. Israel now improves its citizens’ life conditions at the expense of Palestinians in the Gaza Strip and the West Bank.”

Ghadeer Awwad, a lecturer at Birzeit University in the West Bank, concurs.

For her, the Oslo Accords acted more like an “anaesthetic syringe” to temporarily appease Palestinians, particularly in the wake of the First Intifada.

The effect of the agreement, she says, was to gradually reduce Palestinians expectations and demands.

‘Palestinians hoped the Oslo Accords would bring them recognition of their national character and a dignified life after long years of suffering. Twenty-five years later, they got neither.’

“Before the Oslo Accords were signed, we used to demand the end of occupation as a whole,” she tells MEE.

“Now, we call for limiting Israeli settlement activity instead of ending it, we demand that the occupation ease its restrictions on freedom of movement instead of removing them completely.”

While Sabra had a similarly dire view of the consequences of Oslo, he nonetheless saw the impasse of the 1993 deal as fuel for Palestinian action against the occupation - as exemplified this year by the Great March of Return in Gaza.

“Most Palestinians are convinced that the Oslo Accords have reached a dead end. They now believe that calling on the international community to put pressure on Israel to gain their independence is useless,” he added.

“They have come to a conclusion that only resistance in all its forms would help them return and end occupation.” Oslo
The problem with Oslo? It's still alive
Jamal Juma Oslo
A 'gentleman's agreement': How Israel got what it wanted from Oslo Oslo
Palestine, Israel and the Oslo Accords: What you need to know