Chants of 'civilian rule, civilian rule!' come a day after an agreement was reached with the military council Sudanese forces fired tear gas at hundreds of Sudanese demonstrators as they marched in Khartoum on Thursday to commemorate those killed during the months-long demonstrations that have rocked the country.

Witnesses said men and women waving Sudanese flags marched from several parts of the capital towards the Green Yard, a prominent square.

As they marched, the demonstrators shouted slogans that have been the rallying cries of the uprising that led to the toppling in April of longtime dictator Omar al-Bashir: "Civilian rule, civilian rule!" and "Freedom, peace, justice!"

The rallies came a day after protest leaders and army rulers inked a power-sharing deal to form a joint civilian-military body tasked with installing a civilian administration - the main demand of demonstrators.

The marches were held in response to calls from a key protest group. "The rallies are a tribute to those honourable martyrs of the December revolution," the Sudanese Professionals Association (SPA) said in a statement. "Protesters who were dispersed are trying to mobilise again and continue with the rally. It's like a game of cat and mouse between them," a witness told AFP.

One onlooker said that many who arrived at Green Square were in tears as they chanted slogans remembering those killed in the protests.

The SPA spearheaded the initial campaign, which erupted in  December against the government of Bashir over its decision to triple the price of bread.

Those protests swiftly escalated into a nationwide movement against the president's 30-year-rule that led to the army's overthrow of Bashir in April.

But protesters have continued to take to the streets against the military council that took power in his place, calling for a transition to a civilian-led government.

More than 200 people have been killed since December in protest-related violence, according to doctors close to the movement.

Tensions between the generals and protesters surged after a deadly 3 June raid against a weeks-long Khartoum sit-in that left at least 100 demonstrators dead.

On Wednesday, the protesters and generals finally agreed on a deal, paving the way to a transitional civilian administration that would govern for just over three years.

The talks, however, are set to continue Friday as the two sides push to resolve remaining issues.

"[The generals'] natural tendency is to surrender nothing and to maintain...the last word in all matters of the state - which was the situation under Bashir essentially," Magdi El Gizouli, a fellow at the Rift Valley Institute, told Reuters. "Upturning this arrangement is a formidable task."

A western troika of the United States, the United Kingdom and Norway, which have been involved in mediating the talks, welcomed the initialling of the deal and called for the formation of a civilian-led administration.

"We encourage the parties to quickly conclude the parallel constitutional agreement and form the civilian-led transitional government, which the Sudanese people have courageously and peacefully demanded since December 2018," they said in a joint statement.

"The troika looks forward to engaging a civilian-led transitional government as it works to achieve the Sudanese people's aspirations for responsive governance, peace, justice and development."

Sudan has a recent history of civil conflicts, including in the western region of Darfur and South Kordofan and the Blue Nile in the south.

The suffering for Sudanese civilians already subjected to a severe economic crisis could intensify as the crisis of power continues. Of a population of 44 million, more than 5 million people are in need of assistance and nearly 2 million are displaced, according to the United Nations. 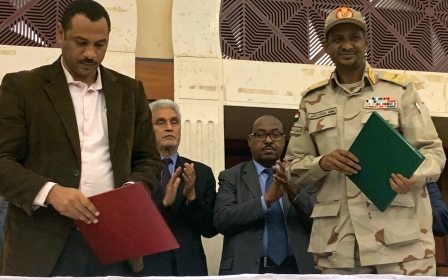 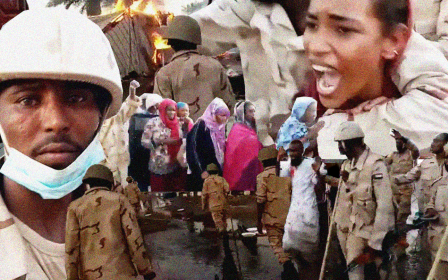