'The poor will suffer most': Anxiety spreads in Iran over renewed US sanctions

With fears of layoffs and hyperinflation, Iranians reel as the US promises further measures in November TEHRAN – Hours before US President Donald Trump signed the executive orders to reintroduce sanctions against Tehran, Iranian President Hassan Rouhani sat in front of a state television camera, trying to console his public.

"People can be sure that the government has put all its effort alongside the other branches to manage the economy," he said late on Monday.

'How is it that America doesn’t know that the poor class will suffer the most under the sanctions?'

"We are not alone all over the world. That is, all the countries around the world with the exception of a few countries support Iran, and consider Iran as a committed nation which can be trusted."

On Tuesday, despite the loss of half its value over the past few months, the Iranian rial rallied, trading at around 90,000 to the dollar after hitting a record low of 110,500 on 30 July.

"The future is blurry and we can't predict it correctly, but the rial gaining value is surely in the interest of people,” Mahdi Taghavi, an Iranian economist and professor at University of Allame Tabatabi, told Middle East Eye.

But even with Rouhani’s appeal and the rial’s rise, many Iranians say they are bracing for prices to skyrocket even further, continued anxiety over job security and a familiar uncertainty over whether they will be able to obtain basic necessities.

And this all comes months before a second tranche of US sanctions, specifically targeting sales of Iranian oil, are imposed in November – or before they “ratchet up to yet another level”, as Trump tweeted.

"My mother has cancer and whenever the sanction issue comes up, I can't find her medications easily. Or when I discover where those drugs are sold, the prices are too much for me and I can't afford it,” said Reza Fadai, a driver for Snapp, Iran’s Uber equivalent.

"How is it that America doesn’t know that the poor class will suffer the most under the sanctions?" he asked.

Nasser Adel-pour, a senior engineer at a private water and wastewater company, said it should have been “prosperous days” for the company given Iran’s drought and water shortages.

Instead, his company has struggled to sign contracts over the past six months and will now be unable to buy critical parts from Germany.

“If we even succeed in buying the parts, it will be costly for us because we have to purchase them through insecure and unofficial channels,” he said.

Adel-pour said his boss has let employees know he may be forced to close down – and there are many other workers in other smaller and medium-sized companies that he’s heard have already been laid off.

As unease swirls, there was also a sense that the US was waging an economic war that will fall squarely on the public’s shoulders - and some say they want to fight back.

“The people and the government should go forward hand in hand and defend our homeland, just like in the 1980s when we were attacked by Saddam [Hussein],” Azam Habibi, an accountant in a private company, said, referring to the Iran-Iraq war.

The new sanctions have given political hardliners an opportunity to slam moderates and reformists for portraying the 2015 nuclear deal as a great success for the Iranian people.

On the opposite end of the spectrum, reformists hold strong to the belief that Rouhani's foreign policy has been victorious.

Prominent reformist figure Mostafa Taj-zade tweeted on 7 August: "While announcing that Trump imposed the same sanctions as Obama, CNN experts admitted that US is alone in the world."

Even as the sanctions have been reimposed, there has been heightened speculation in recent days over a possible talks between Trump and Rouhani, with both leaders saying publicly they would be willing to meet.

Qassem Mohebali, former head of the Iranian foreign ministry's Middle East desk, told local media that if Iran and the US were serious about opening up a dialogue, they should make it official.

"If Mr Trump has invited Iran for negotiations, then Iran should ask him to propose this through the official channels, and Iran will respond to that respectively,” Mohebali was quoted as saying.

But if Trump is simply offering talks for propaganda purposes, Rouhani's comments earlier this week that he would accept negotiations without preconditions is an appropriate response, he said.

Only sitting at the negotiation table - rather than talking about being willing to negotiate - will bring any resolution, he added.

Meanwhile, Deputy Commander of the Islamic Revolutionary Guard Corps (IRGC) General Hossein Salami stated the group's opposition to talks with the US.

"The enemy wants to create this perception in [people's] minds that the Islamic Republic of Iran establishment has been weakened,” Salami said. "They want to persuade the Iranian nation to stand against the political establishment to force the officials to negotiate with the US."

Quiet in the bazaar

Just weeks ago, shops closed as Tehran’s Bazaar was lit up with protests over the rial’s plummeting value and anger over government mismanagement of the currency crisis.

This week, as politicians had their war of words, many traders in the Bazaar have stopped work once again, not out of protest, but out of uncertainty on the economic horizon, said shop owner Maysam Sobhani.

"Merchants in the Grand Bazaar are still waiting and not working,” Sobhani said. “As long as the dollar price is not stabilised, people in the Bazaar won’t restart importing and exporting."

Whatever happens next, he said it's likely prices in this already inflated marketplace will rise further. Still, Tehran could find a way to bypass the worst of the impact through trading with China, Turkey and Dubai, he suggested, but the currency chaos still needs to be sorted out.

"The government should work to stabilise the market and dollar value inside the country,” said Sobhani.

The increase of the rial’s value this week is a good sign, said Taghavi, the Iranian economist and professor, a result of a cash injection from the central bank, change in the bank’s leadership and the end of a four-month policy banning the trading of rials outside the official rate.

“I think Tehran has a good amount of foreign currency reserve, and if they manage to continue the oil export, enhancement of the rial's value will persist,” he said.

Meanwhile, the clock is ticking ahead of the oil sale sanctions which Trump has promised for the fall. 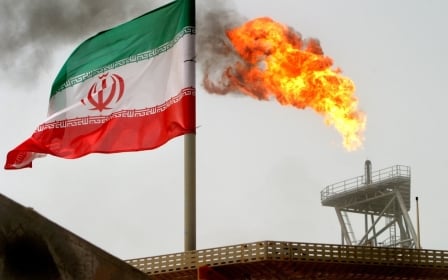 Iran Nuclear
US bid to cut off Iranian oil to China fails: Report