Anti-government protesters returned to the streets of Khartoum and staged demonstrations in hospitals and universities overnight and on Tuesday in defiance of sweeping new emergency powers announced by Sudanese President Omar al-Bashir.

Under the new powers, imposed by presidential decree and announced by Bashir on Monday night, people arrested for participating in unlicensed demonstrations and public gatherings would face 10 years in prison with special courts established to prosecute the protesters. 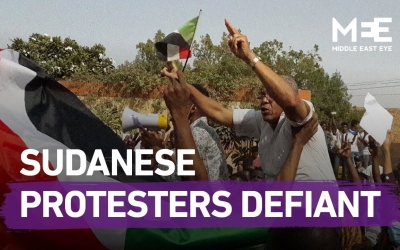 But protest organisers, opposition parties and activists on social media immediately called on their supporters to defy the new laws, and hundreds of people responded by rallying in Khartoum late on Monday, calling for Bashir to step down.

On Tuesday, doctors and students organised sit-ins at dozens of hospitals and universities in Khartoum and elsewhere around the country, drawing what activists described as a “brutal response” by security forces in some locations.

Nagla Atta, an opposition activist, said that protests had taken place at several universities in the capital, including Ahfad, Medical Science and Technology and Sudan International.

She told Middle East Eye that police and security forces had fired tear gas inside the universities for a third consecutive day.

“Using the power of the emergency laws, the security forces and police cracked down aggressively on the students, firing tear gas, and raiding the campuses,” she said.

“The security forces brutally attacked the universities, beating the students and abusing the female students.”

Siham Hassan, an opposition member of parliament, called on the minister of health in Khartoum state to investigate who had allowed security forces to enter the campus of the Medical Science and Technology University.

Human rights activists say that the laws announced by Bashir on Monday in response to two months of widespread protests against his 30-year rule are unprecedented since Sudan’s independence in 1956 and amount to a ban on any form of resistance to the government.

The decrees ban protests and assembling, and other political activities. They also specifically target criticism of the government on social media by defining that as undermining the constitution, a crime that can carry the death penalty under Sudanese criminal law.

The decrees also give police and security forces more powers to carry out inspections, and to monitor individuals, buildings and institutions.

They will also be allowed to detain or restrict the movement of any person suspected of violating the emergency laws, and to seize private property suspected of being used for activities prohibited by the laws.

The new laws also ban dealing in foreign currency and the smuggling of wheat.

They also ban the circulation of information, photos or documents regarding officials and their families, including the family of the president.

Responding to the new laws, the Declaration of Freedom and Change, the opposition alliance which has called for Bashir to step down, said they were “unconstitutional measures that are aimed at cracking down on the uprising and extending the time of the president in power”.

“We have nothing to do with what the dictator is doing and we will stick with our goals, demands and the timetable we put for the protests,” the alliance said in a statement.

Another confrontation appears to be looming between members of the ruling National Congress Party (NCP), with one senior member telling MEE that the party’s leadership bureau had rejected Bashir’s suggestion of stepping down as leader of the party while continuing as president.

The head of the NCP political committee’s consultative council, Mohamed Hassan Alamin, confirmed that the bureau had ruled that Bashir could not relinquish leadership of the party without also stepping down as leader of the country.

On Friday, Salah Gosh, the head of Sudan’s NISS security agency, told reporters that Bashir would step down from the NCP and would not nominate himself for presidential elections next year.

Two hours after the meeting of the NCP leadership, Bashir said on national television that he intended to be a president for all Sudanese and had asked parliament to postpone amendments to the constitution that would have allowed him to stand for a third consecutive term despite a two-term limit being introduced in 2010.

Political analyst Mohamed al-Fatih said that the state of emergency appeared to be primarily targeted at opponents of the president within the ruling party’s inner circles.

He told MEE that Bashir was moving towards the full militarisation of the state and the elimination of opposition within the party leadership.

He also appointed 16 army officers and two NISS officers as governors of the country’s 18 provinces.

On Tuesday, Bashir also reshuffled his senior military staff council, and named General Essam al-Din Mubarak, the former deputy head of the council, as a minister of state in the defence ministry.

“Looking at the clear split within the corridors of the ruling party, the current steps of appointing senior military officers to the senior posts of the governorship and the first vice-president means that Bashir is intending to rule with a pure military state,” said Fatih. 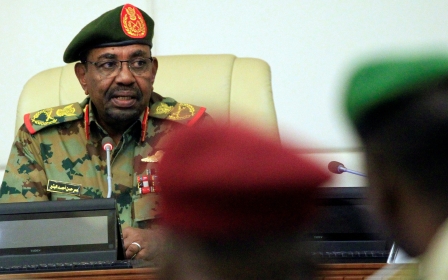 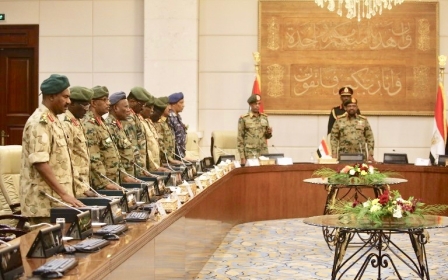 Sudan Protests
Sudan protesters rally against state of emergency as new PM, governors are sworn in