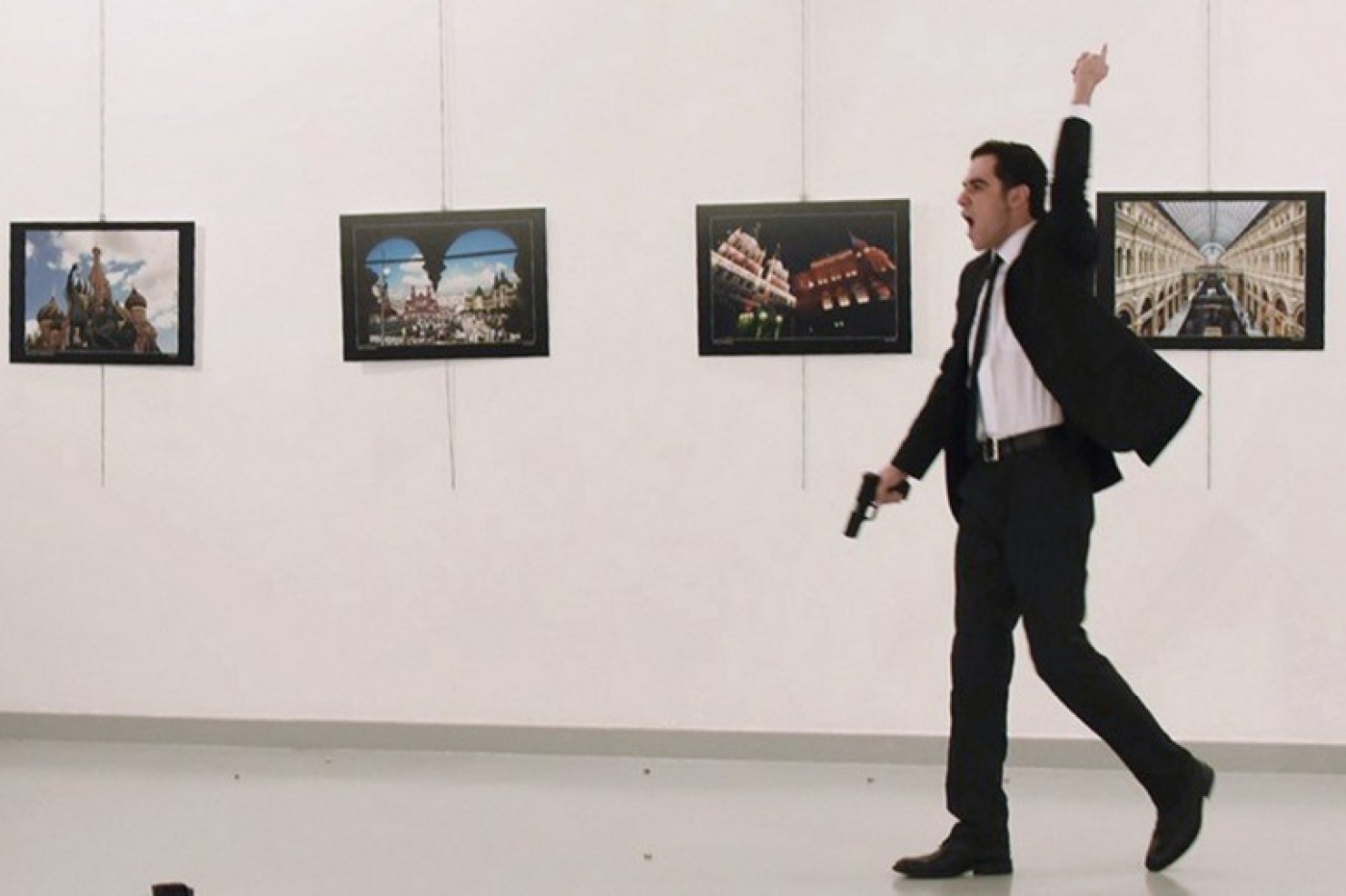 Mevlut Mert Altintas, the gunman who killed Russia's ambassador to Turkey on 19 December (AFP)
By
MEE and agencies

The young Turkish policeman who killed Russia's ambassador to Ankara this week had provided security for President Recep Tayyip Erdogan eight times since the 15 July failed coup bid, a report said on Wednesday.

Mevlut Mert Altintas, 22, pumped nine bullets into ambassador Andrey Karlov at an art exhibition centre on Monday evening, before he himself was killed by Turkish police - prosecutors now say they are probing why he was not captured alive.

Altintas, a member of the Ankara anti-riot police for two-and-a-half years, was on duty at eight events attended by Erdogan since July, the Hurriyet daily said.

At such events he was part of the second wave of Erdogan's security after the personal bodyguard team of the president, wrote Hurriyet's writer Abdulkadir Selvi, known for his contacts in the ruling elite.

READ: What happens to ties between Moscow and Ankara now?

Turkish foreign minister Mevlut Cavusoglu told US counterpart John Kerry in a phone call on Tuesday that the authorities believed the US-based cleric Fethullah Gulen, whom it blamed for the 15 July coup bid, was behind the assassination plot.

Turkish authorities are now investigating possible links of Altintas to Gulen, including a school he attended that was run by the cleric's group. Hurriyet's Selvi said that on the day of the 15 July attempted coup, Altintas had called in sick to the police, but it was not clear what he did that night.

Erdogan also said that the killer was a member of the Gulenist movement on Wednesday evening.

"There is no need to make a secret out of the fact he was a member of FETO," Erdogan said, in his first clear attribution of blame for the murder.

Gulen, who has lived in self-imposed exile in the United States since 1999, has strongly condemned the assassination and always denied involvement in the coup.

Turkey has embarked on a massive crackdown on what it calls the Fethullah Terror Organisation (FETO) in the wake of the 15 July coup aimed at unseating Erdogan, arresting and sacking tens of thousands.

But Erdogan said the assassination of Karlov showed Gulen supporters were still present within the key security structures and the purges needed to continue.

The security forces have now detained 13 people over the attack including close relatives of Altintas, Turkish media reports said.

With Turkey already on high alert after a string of deadly attacks, an individual also opened fired outside the US embassy in Ankara overnight.

The embassy said in a statement that no one was hurt and the individual was detained, but the embassy and consulates in Istanbul and Adana were closed for normal operations.

A statement circulated on Wednesday said Jabhat Fatah al-Sham - the former Al-Qaeda affiliate in Syria - had claimed responsility for the killing of Karlov. However, the militant group later released another statement saying the previous statement had been false. They nevertheless praised the attack:

Jabhat Fatah al-Sham denies involvement in the assassination of the Russian ambassador in Turkey. Statement in its name is fake pic.twitter.com/NsXowpsKAO

Meanwhile, a team of 18 Russian investigators arrived in Ankara on Tuesday to take part in a joint probe inside Turkey, an unprecedented move agreed by President Recep Tayyip Erdogan and Russian counterpart Vladimir Putin.

Russian President Vladimir Putin ordered his secret services to boost security at home and abroad, and to step up cooperation with foreign intelligence services.

The Russian investigative team visited the scene of the attack at the Contemporary Arts Centre in central Ankara as part of a joint probe with Turkey.

Erdogan said in a speech in Istanbul that he and Putin agreed in a phone call after the murder that "our expanding areas of cooperation with Russia, particularly on Syria, will not be hampered by this attack".

In a conversation with US Secretary of State John Kerry, Turkish Foreign Minister Cavusoglu said "Turkey and Russia know that behind the attack... there is FETO," referring to Turkey's acronym for Gulen's organisation.

The US-based Gulen had earlier issued a statement to condemn the assassination as a "terrorist act" that left him "shocked and deeply saddened".

Dramatic footage of Monday's assassination showed Karlov stumble and crash to the ground on his back as Altintas brandished his automatic pistol at terrified onlookers who cowered behind cocktail tables.

The lone gunman shouted "Allahu Akbar" ("God is great") and "Don't forget Aleppo", vowing that those responsible for events in Syria would be held accountable. Altintas did not go through the metal detector security check when he entered the exhibition and was warned by a security officer, according to the Cankaya municipality where the exhibition centre is located.

But after showing his police ID, he was allowed to proceed, it said.

The Hurriyet daily said Altintas, who had worked for Ankara's anti-riot police for the past two-and-a-half years, had stayed at a nearby hotel to prepare for the attack, shaving and putting on a smart suit. He was killed by police after a 15-minute standoff.

His suggestion was also repeated in the pro-government press, before being amplified in the Anadolu report quoting Cavusoglu.

US president-elect Donald Trump had on Monday condemned the envoy's assassination, calling the gunman a "radical Islamic terrorist".