Displaced twice over, tens of Palestinian refugees from Syria now living in Lebanon have had their visas rejected ahead of making the holy pilgrimage Stateless, displaced and driven from home by war, tens of Palestinian refugees from Syria have been denied the chance to perform Hajj by Saudi Arabia, Middle East Eye can reveal.

Millions of Muslims are currently flocking to the holy city of Mecca for the pilgrimage, which is a cornerstone of the Islamic faith and begins on Friday.

However, around 70 Palestinian refugees in Lebanon, the majority of whom are over 70 years old, were informed by authorities last week that they would not be given visas to undertake the pilgrimage that every Muslim must do at least once in their life. 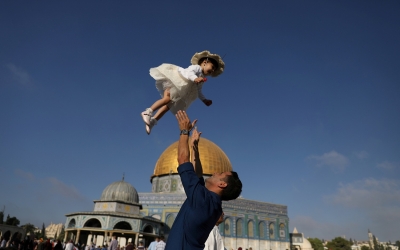 When is Eid al-Adha 2019? The Muslim festival explained
Read More »

The rejected Palestinians are refugees twice over. They are the descendants of Palestinians expelled from their homes during the creation of Israel in 1948, and have now settled in Lebanon after fleeing the Syrian conflict next door in 2012.

Though they hold Syrian-issued travel documents, they hold no country's citizenship.

Last year, MEE reported a wave of Saudi visa restrictions that affected a total of three million Palestinians in Israel, East Jerusalem, Jordan and Lebanon, barring them from performing the Hajj and Umrah pilgrimages.

These restrictions were eventually lifted in February, after five months of exhaustive negotiations with Saudi authorities.

However, for Palestinian refugees from Syria currently residing in Lebanon, the restrictions remain in place.

'Pilgrimage before their lives end'

Last week, the Saudi embassy called the heads of Hajj travel companies in Lebanon and returned the documents of Palestinian refugees from Syria without pilgrimage visas, despite having given its initial approval.

“This was painful for my mother and father, who both are over 70 years old,” a relative of two of the Palestinians told MEE.

“They prepared themselves and were anticipating to travel. All that my parents want is to do pilgrimage before their lives end; they were devastated by the decision 10 days before the actual Hajj starts.”

All affected Palestinians that MEE spoke to wished to remain anonymous in case the Saudi decision was reversed in the future.

To apply for their Hajj visa, the Palestinian's parents had to obtain new Syrian travel documents, which cost $350 each and took 20 days to process, plus travel agent registration fees. For comparison, renewing a British passport costs around $100.

They also travelled to the Saudi embassy in Beirut to have their biometric information taken for the visa, and received the vaccinations necessary to be admitted for the pilgrimage.

Lebanon has placed strict labour limitations on refugees from Syria, both Syrians and Palestinians, pushing hundreds of thousands into poverty. According to the United Nations, 58 percent of Syrian refugees live on less than $2.87 per day.

'The right of performing Hajj should be sacred to all Muslims, no matter what travel documents they have'

Before fleeing Syria, the majority of affected Palestinians lived in refugee camps around Damascus - areas that have now been devastated by war and even occupied by factions of the Islamic State group.

They now live in Lebanon's Beqaa Valley, Saida city and in the country's north.

Ahmed Hussein, director of the Action Group for Palestinians of Syria advocacy group, told MEE that Palestinian refugees from Syria are treated as “tourists” by the Lebanese state.

“The right of performing Hajj should be sacred to all Muslims, no matter what travel documents they have.”

Action Group is investigating the cases of the Palestinians denied visas, Hussein said.

About 27,00 Palestinian refugees of Syria are estimated to currently reside in Lebanon, and just 100 of them travelled to Saudi Arabia last year to perform Hajj, according to Action Group.

They are denied work permits, and risk not being allowed back into Lebanon if they leave, as many have only been staying in the country on tourist visas valid for just a few months.

Last year, 1,500 Palestinian refugees of Lebanon went on Hajj, out of a community of 174,422, according to the country's first and only census of the community.

Palestinians registered in Lebanon also face fierce restrictions and marginalisation, and are limited to only a handful of labour-intensive professions.

Since the Syrian revolution erupted in 2011, Riyadh has cut all ties with President Bashar al-Assad's government, including over Hajj visas. Instead, Saudi authorities coordinate with the Syrian National Coalition (SNC), an opposition body based in Turkey.

Syrians who wish to perform Hajj have to register with the SNC, including Palestinian refugees of Syria.

On Tuesday, 2,500 Syrians arrived in Saudi Arabia to perform Hajj, arriving from locations such as Amman, Istanbul, Erbil, Dubai, Kuwait and Cairo. Around 6,000 came from Damascus via Beirut airport.

MEE has contacted both the Saudi and Palestinian embassies in Beirut for comment, without response. 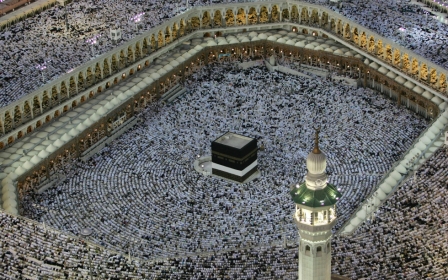 Hajj
How do Muslims perform Hajj?