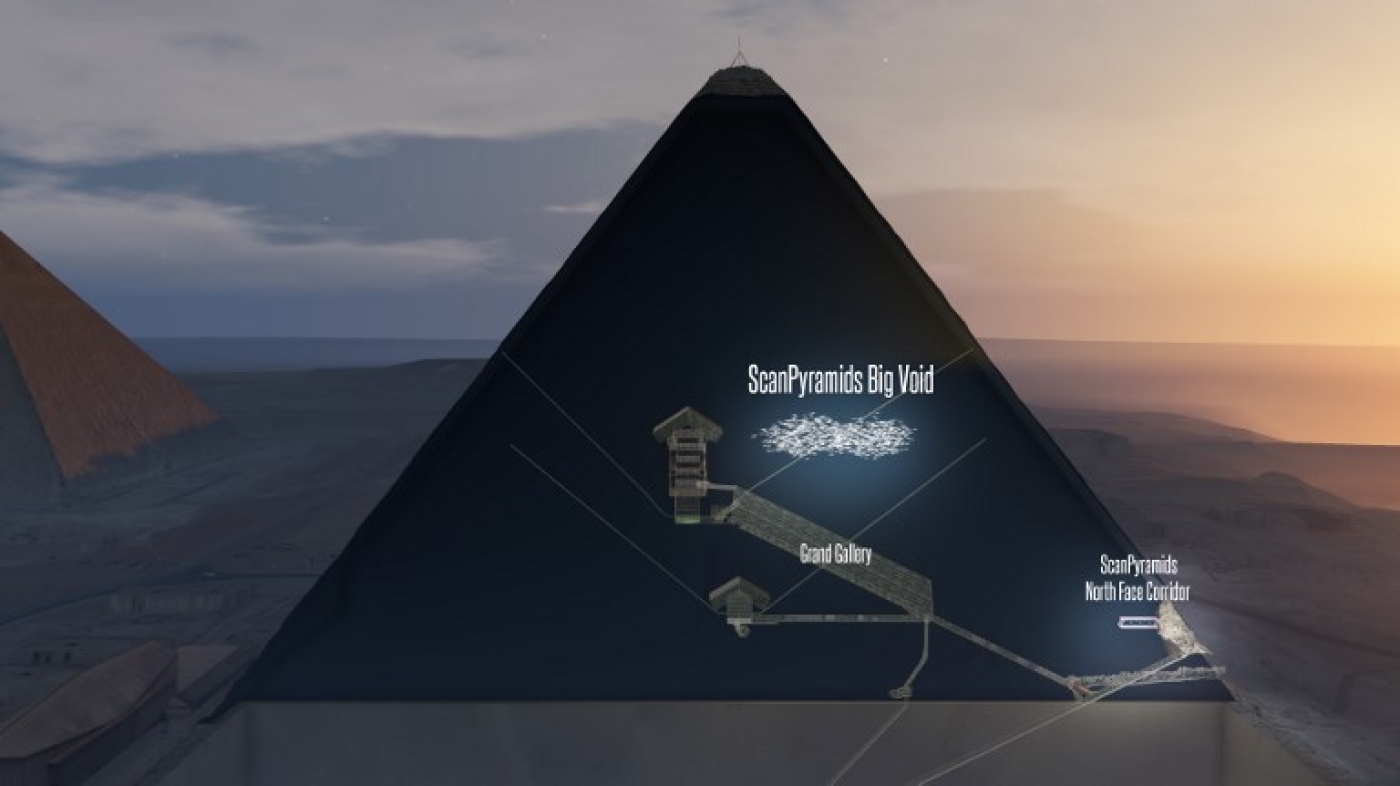 A passenger plane-sized "void" has been discovered in the middle of the Great Pyramid of Egypt, where it has lain secret and untouched for 4,500 years, scientists revealed on Thursday.

The space is one of four cavities, along with the king and queen's chambers and "Grand Gallery", now known to exist inside the giant monument constructed under pharaoh Khufu of ancient Egypt.

"It is big," said co-discoverer Mehdi Tayoubi of the ScanPyramids project, which has been exploring Khufu's pyramid since October 2015 with non-invasive technology using subatomic particle scans.

"It's the size of a 200-seater airplane, in the heart of the pyramid," Tayoubi told AFP of the discovery, published in science journal Nature.

Towering over the Giza complex on Cairo's outskirts alongside smaller pyramids for kings Menkaure and Khafre and the Great Sphinx, the Khufu's pyramid is the oldest and only surviving construction among the Seven Wonders of the Ancient World, and one of the largest buildings ever erected on Earth.

The cavity is the first major structure found inside the Great Pyramid since the 19th century, the research team said.

"There have been many theories about the existence of secret chambers inside the pyramid," said Tayoubi. "But none have predicted anything this big."

The exact shape and size of the void is fuzzy - its purpose and possible contents a mystery.

But it is thought to be at least 30 metres long, and located above the "Grand Gallery" - a sloped corridor almost 50 metres long and nine metres high which links Khufu's burial chamber at the pyramid's centre to a tunnel leading outside.

The monument - 139 metres high today, and 230 metres wide - was erected as a tomb for Khufu, also known as Cheops. To this day, nobody knows quite how it was built.

The void, said co-author Kunihiro Morishima from the Nagoya University in Japan, "was not known by anyone until now, from when the pyramid was built 4,500 years ago".

"The big void is completely closed," he added, which means anything inside it would not have been "touched by anyone after the pyramid (was) built".

The pharaohs of ancient Egypt built these monumental tombs for themselves, complete with sarcophagus to hold their embalmed mummies, and stocked with everything they could require for the afterlife - food, clothing and jewellery.

The Mummy returns: How Egypt is waging war against the smugglers
Read More »

Khufu's pyramid was plundered long before it was visited by modern archaeologists, and no relics remain from any of the known chambers.

For this reason, the new cavity may be "very exciting," said Morishima, though it is not known if it contains anything at all.

The team used a technique called "cosmic-ray muon radiography", which allowed them to visualise "known and potentially unknown" voids in the pyramid without having to touch a single stone.

Muons are charged, heavy particles formed from the interactions of cosmic rays with atoms in the upper atmosphere.

Similar to X-rays which can penetrate the human body and allow bone imaging, these particles can follow a mostly straight line through several hundreds of metres of stone before decaying or being absorbed, the team said.

By recording the position and direction of each muon as it travels through the pyramid, muon detectors can distinguish cavities from stone.

"We will continue to conduct muon imaging for revealing the detail" of the void, said Morishima - including its dimensions and inclination, and whether it consists of a single, large cavity or a complex of several.

"Our muon imaging technology can't confirm (whether) there are some artifacts or not," he added. Anything inside would be "too small for muon imaging."

The team is already turning its attention to new technology for the next step - possibly a miniature robot that can travel through tiny holes to examine the inside of the void without disturbing anything.

"While there is currently no information about the role of this void, these findings show how modern particle physics can shed new light on the world's archaeological heritage," the authors wrote in Nature.