An Israeli policeman gestures as a car belonging to Jewish settlers burns amid tension over the possible eviction of several Palestinian families in the Sheikh Jarrah neighbourhood (Reuters)
By
Lubna Masarwa
, Sheren Khalel

Palestinian protests against mass evictions in the occupied East Jerusalem neighbourhood of Sheikh Jarrah were violently attacked by Israeli police and settlers once again on Thursday night, as tensions over land rights skyrocket.

A legal battle is being played out in Israel’s Supreme Court, which is considering the legality of an eviction notice that would see 40 Palestinians, including 10 children, forced from homes their families have lived in for generations.

A ruling was expected on Thursday following days of violent crackdowns on Palestinian protests, but the decision was instead delayed until Monday, Israel's Jerusalem Day, which celebrates the occupation of East Jerusalem following the 1967 war. 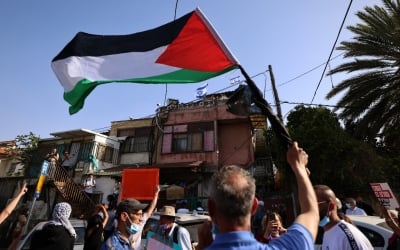 One teenager was shot in the leg and a man was wounded after settlers stabbed him and pepper-sprayed him while he was returning from work. Medics treating the teen told Middle East Eye that the bullet did not penetrate the bone or any major arteries.

Over the past week, dozens of Palestinians have gathered each day for iftar, the evening meal breaking the Ramadan fast, across from one of the buildings that settlers have moved into.

AFP reported that the far-right, Kahanist MP Itamar Ben-Gvir, who has relocated his office to a Sheikh Jarrah street, was heard repeating in Hebrew "this house is ours".

Haaretz reported that minutes after the meal began, Ben-Gvir's supporters and Palestinian residents began to curse and shout at each other.

The Israeli newspaper said one of the Palestinians approached Ben-Gvir's supporters, one of whom used the pepper spray.

Palestinians of all ages have joined in the protests, including many teens.

"There’s a new generation that is fearless and we will not give up on our neighbourhood, we’re not scared of being arrested or being shot - we won’t let our neighbourhood go, we will take back our homes again," one told MEE.

'There’s a new generation that is fearless and we will not give up on our neighbourhood, we’re not scared of being arrested or being shot'

Raeda, a mother from Sheikh Jarrah, opened her home to protesters seeking shelter, giving them water and a place to get away from the tear gas and other crowd dispersal methods being used by Israeli forces.

"It's my duty to open my home to all Palestinians. Sometimes there are twenty youths taking cover in my home," Raeda told MEE.

She said at one point Israeli police attempted to force their way into her home while several young men were recovering from tear gas inhalation inside, but she held them off at the door to keep the protesters safe.

"I don't fear anything anymore, except that our houses will be taken," she says.

Tens of thousands of Muslim worshippers are expected at the Al-Aqsa Mosque to mark the final Friday of the holy month of Ramadan.

A large Israeli police presence has been stationed throughout Jerusalem's Old City and officers have set up roadblocks in the area.

Muna al-Kurd, whose family are faced with eviction and was attacked on Tuesday evening, told MEE that if Israeli police and settlers take over their houses, "then they will take the whole neighbourhood of Sheikh Jarrah".

Earlier this year, a Jerusalem district court ruled the homes legally belonged to the Jewish families, citing purchases decades ago. In pictures: Seven things you should know about Sheikh Jarrah's history
Read More »

The Jewish plaintiffs claimed their families lost the land during the war that accompanied Israel's creation in 1948, a conflict that also saw hundreds of thousands of Palestinians displaced from their homes.

The Palestinian families implicated in the case have provided evidence that their homes were acquired from Jordanian authorities, who controlled East Jerusalem from 1948 to 1967.

Amman has intervened in the case, providing documents to support the Palestinian claims.

Israel seized East Jerusalem in 1967 and later annexed it in a move never recognised by the international community.

The district court ruling infuriated Palestinians in Sheikh Jarrah, who viewed it as a further step in what they see as a Jewish settler effort to drive Arabs out of East Jerusalem.

Israel's Supreme Court had called on the sides to seek a compromise, but when that failed it announced it would hold a new hearing on Monday, during which it is expected to rule on whether the Palestinians can appeal the district court decision.

The United Nations has expressed concern after weeks of clashes, that have seen police use "skunk" water cannons spraying foul-smelling water and deploying anti-riot officers on horseback, resulting in several arrests.

UN Middle East envoy Tor Wennesland warned in a statement that developments "related to the eviction of Palestine refugee families in Sheikh Jarrah and other neighbourhoods in occupied east Jerusalem" was "very worrying".

'I urge Israel to cease demolitions and evictions, in line with its obligations under international humanitarian law'

"I urge Israel to cease demolitions and evictions, in line with its obligations under international humanitarian law," he added.

Palestinian Foreign Minister Riyad al-Maliki sent a letter to the International Criminal Court urging it "to take a clear and public stand against crimes perpetrated by Israel against the Palestinian people in Sheikh Jarrah neighbourhood".

In a rare public warning on Tuesday, Mohammed Deif, the leader of the military wing of Hamas, said Israel would pay a "high price" over the Sheikh Jarrah dispute. 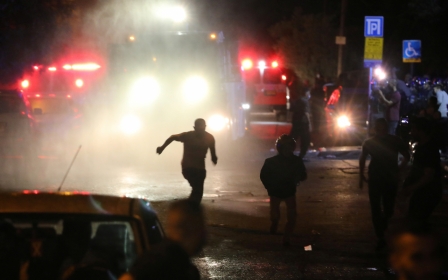 Occupation
'It looks like a war zone': Israeli forces violently crack down on Palestinians in Sheikh Jarrah
Live 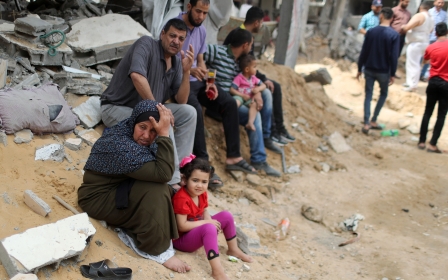