Mired in tribal tensions and regional power struggles, Sudan is the latest country caught in the scramble for the Horn of Africa, analysts say The coup in Sudan has provided a new opening for Gulf states and other regional powers vying for influence in the hotly contested Red Sea region, complicating Western and international efforts to push the military for a return to the country's transition to civilian rule.

Sudan's precarious political and economic future was thrown into chaos on Monday after the military dissolved the government and declared a state of emergency.

Announcing the move, Sudan's most senior military leader General Abdel Fattah al-Burhan, chair of the sovereign council overseeing the government's supposed transition to democracy, promised to create a new technocratic government that would guide the country to free elections in 2023.

Sudan emerged from dictatorship in 2019 after the army, riding a wave of popular mass demonstrations against the 30-year rule of Omar al-Bashir, overthrew the long-time leader. 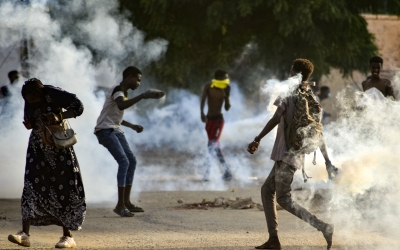 Tensions between the civilian and military leaders overseeing the government had been mounting for weeks as their delicate power-sharing agreement began to unravel in the face of an approaching deadline for the armed forces to hand over power to their counterparts.

The military has claimed its actions were necessary to "avoid a civil war" and said it wants more non-political appointees in government. Sudanese have taken to the streets in protest, clashing violently with security forces. Critics, including the US, EU and African Union have condemned the military.

Many say the generals are reluctant to cede power and risk the crimes they allegedly committed during the Bashir era being exposed. The military also has a choke-hold on the country's key industries, maintaining vast business and patronage networks that would be jeopardised if they lost a seat at the governing table.

As the struggle plays out, the commanders are looking towards regional powers, namely Saudi Arabia, the UAE and Egypt, which analysts say likely prefer a reliable and familiar military regime in their backyard as opposed to an uncertain civilian government.

"The coup is internally driven, but I don't think they [the military] would have done it without knowing they would have external support," Jacqueline Burns, a senior policy analyst with the RAND Corporation and former strategy adviser on Sudan at the US Department of State, told Middle East Eye.

Analysts told MEE that the UAE and Saudi Arabia see an opportunity in Sudan, where they have extensive ties with the generals, to deliver a blow to regional rivals, including Turkey and Qatar, which are trying to make inroads in the Horn of Africa region.

"Sudan is straight out of the Tunisia playbook," said Theodore Karasik, a senior adviser to consulting firm Gulf State Analytics, referencing the North African country where the government was recently ousted in what critics decry as a coup.

"Some other countries see a military government in Sudan as one part of the transformation sweeping away Muslim Brotherhood elements allied with Qatar and Turkey," he added. 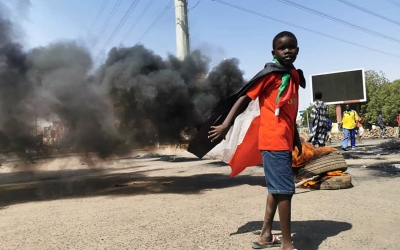 Karasik said the Gulf states' interest in Sudan shows that, "despite a lowering of tensions between Doha and Abu Dhabi", this ideological battle is still playing out.

Sudan is not the only fragile country along the Red Sea to be impacted by competing visions and medium-power rivalries that are consuming the strategic region, through which at least 10 percent of global trade passes.

Somalia's president recently cancelled elections and is holding on to power with the backing of Qatar.

Neighbouring Ethiopia, which is being torn apart by civil conflict, and is locked in a heated dispute with Sudan and Egypt over the Nile dam, is hunting for allies and purchasing drones from Turkey.

Gulf states, along with China and Russia, have all been trying develop ports and military bases in Sudan.

Doha recently bid against Emirati and Chinese firms to expand facilities at Sudan's port of Suakin, while Russia has been trying to set up a naval logistics base in the country.

Turkey's plan to lease Suakin island on the Red Sea from Khartoum and establish both a military and civilian presence a short distance from Saudi Arabia's coast stalled after the overthrow of Bashir, and ascent of generals closer to Riyadh and Abu Dhabi.

In the lead-up to the military take-over in Khartoum, the focal point of increasing tensions had been Port Sudan, the country's main commercial artery which is owned by the military-controlled Sudan Sea Ports Corporation.

Protesters blockading the port hail from Sudan's Eastern Beja tribe, whose members claim they have been neglected by the transitional government and demand the government steps down. By preventing the export of oil from South Sudan and the flow of basic goods into the country, they dealt a severe blow to Sudan's already crippled economy.

And while the military has recently shown few qualms about firing at protesters, it took a back seat during the Beja's month-long blockade of the army-controlled port. Tribal leaders said on Monday on the Saudi-owned Al-Arabiya TV channel that they support the military and promised to lift the shutdown.

"The Beja are going to play a big political role now," Guled Wiliq, a non-resident scholar at the Middle East Institute told MEE. "And I believe they will receive the support of Saudi Arabia." The grievances voiced by the Beja are just one element to a complex web of tribal and clan rivalries attached to the interests of competing regional powers in Sudan, which experts say reaches the top of the military command.

Burhan, Sudan's most senior military commander and head of the governing Sovereign Council before he suspended it on Monday, has deep ties with Egyptian President Abdel Fattah el Sisi, having trained at the same military school as the former general.

The day after the coup was announced, Sudan and Egypt began joint military drills along their shared border.

Marina Ottaway, a fellow at the Woodrow Wilson Center, told MEE that the military takeover was seen as a big win for Egypt in its long-running dispute with Ethiopia over the Nile dam.

"The coup puts Sudan firmly in the same camp as Egypt on the Nile dam and eliminates any voices on the civilian side of government who may have been more accommodating to Ethiopia," she said.

'Why else are the Darfuris coming in?'

Although Burhan has emerged as the public face of the coup, some say the real power lies with military commanders and former rebels from the country's borderlands, particularly in the Darfur region, who are even more closely aligned with powerful Gulf states.

A seemingly lawless western province bordering Chad and Libya, for decades Darfur was governed by a collection of tribesmen, warlords, and rebels, who switched between fighting each other and the government in Khartoum for years in a conflict which claimed the lives of more than 300,000 people.

Following the ousting of Bashir, some of these commanders were brought into government by a 2020 power-sharing agreement which sought to end the myriad of conflicts raging along Sudan's periphery and incorporate one-time rebel forces into the military.

A Sudanese source in direct contact with military commanders in the west of Darfur told MEE that these generals are now prepared to play a major role in the new government.

"The Darfuris already have forces in Khartoum because of the power-sharing, They are integrating with the Sudanese army to become more disciplined," the source said. "These forces are supporting Burhan." "The relationships the leaders in Darfur have with the Gulf are pretty strong. They were a lot of smart people in Darfur who understood the power of those ties," Burns said.

Perhaps the best example is General Mohamed Hamdan Dagalo, known by the name Hemeti. An ethnic Arab hailing from the border near Chad, Hemeti is a former camel trader who rose to become commander of the dreaded Janjaweed horseback militia, which grew into Sudan's Rapid Support Forces.

He established control of lucrative gold mines in north Darfur and through his trading company, Al Junaid sent gold to be refined and sold abroad in the UAE.

Hemeti's ties with the Gulf were further bolstered when he played a key role supplying fighters to the Saudi-led coalition waging war against Iran-aligned Houthi rebels in Yemen.

"This is not a Burhan-centric coup," Burns said. "He is not doing this on his own and perhaps he is even serving as the figurehead to Hemeti."

Wiliq echoed those sentiments and said he believed powers in the Gulf did not have confidence in Burhan, who they view as an expendable and unreliable figure.

"Why else are the Darfuris coming in?" Wiliq stated. "Burhan knows that after he pushes the civilian government out he needs to bring in the tribes and paramilitaries from the periphery to satisfy the Gulf."

If the military manages to outlast protests at home and pressure from abroad, support from the Gulf, both economic and diplomatic, will likely be crucial.

On Wednesday, the African Union announced it was suspending Sudan over the coup, and in perhaps an even bigger blow for its ailing economy, the World Bank said it would halt disbursements to the country.

"It is almost a certainty that Saudi and the UAE will have to provide money," Ottaway said. "The reason the military could afford to do this was because they know they are going to get help from the Gulf."

With international pressure mounting and pro-democracy protesters continuing to take to the streets in Khartoum, the Biden administration has said it is engaging with allies in the Gulf to try and resolve the crisis inside the country.

The amount of influence Western countries have remains an open question. As one way to keep the transition to civilian government on track, the IMF and international creditors had agreed to forgive roughly $50bn of Sudan's debt; that has now been cast in doubt and the IMF says it is monitoring the situation.

Even more galling for Washington, last minute pleas from the Biden administration to maintain the transition were snubbed by the country's power-broker generals who began arresting civilian leaders just hours after meeting with Washington's Horn of Africa envoy.

Wiliq says the fate of Sudan is likely tied to regional powers and their local Sudanese allies, all of whom are caught up in a scramble for the Red Sea.

"Watch Port Sudan," he said. "That will tell you who is in control." 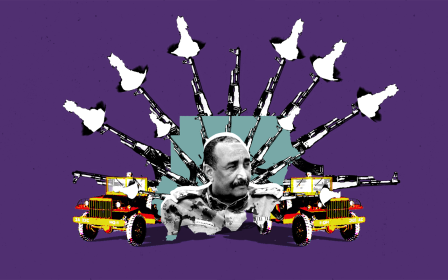