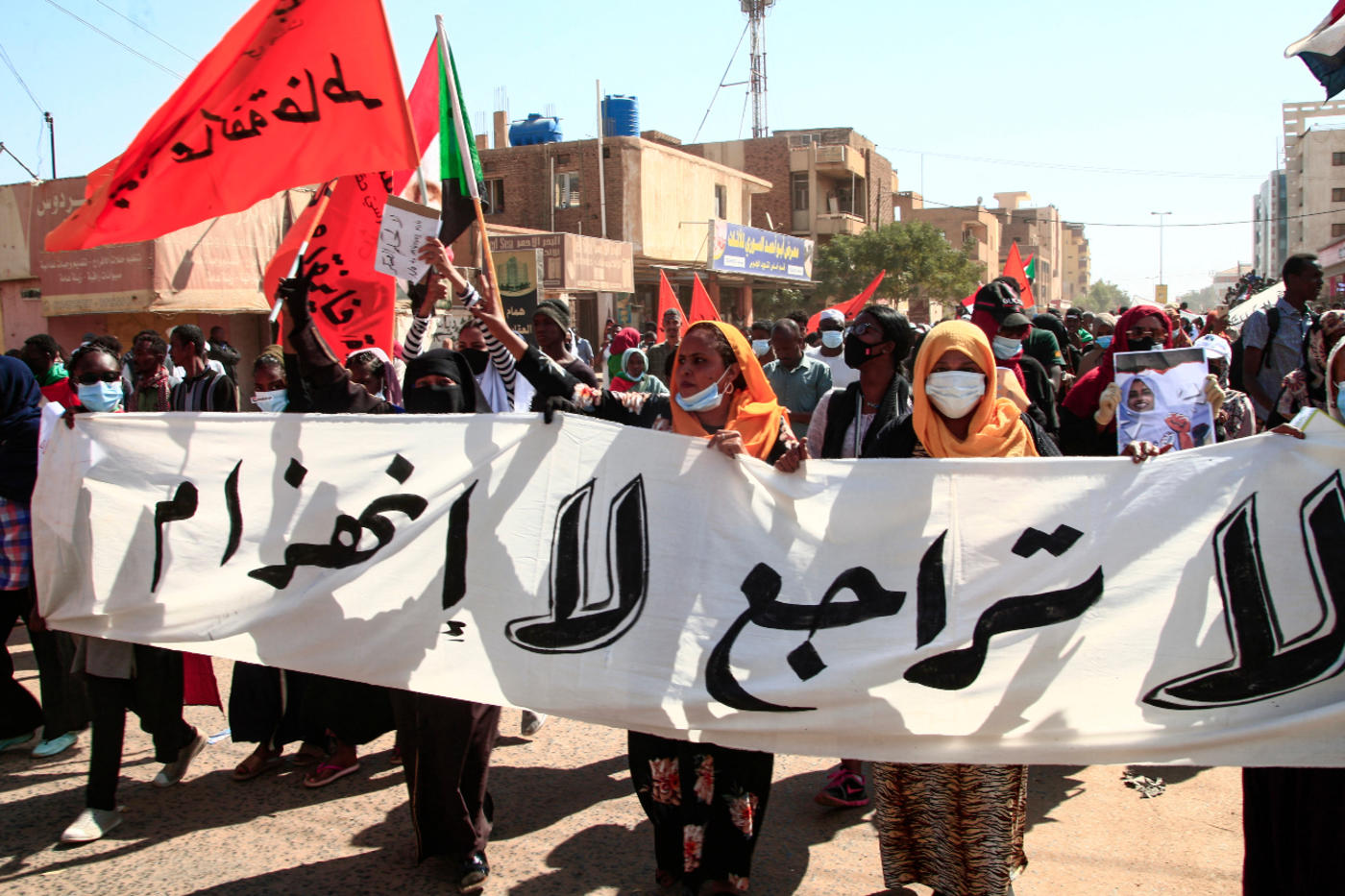 Demonstrators carry a banner that reads 'no backing up, no defeat' as they rally in the northern part of the capital Khartoum, on 19 December 2021 (AFP)
By
MEE and agencies

Sudanese security forces fired tear gas at a huge crowd of protesters near the Republican Palace in Khartoum on Sunday as tens of thousands of demonstrators marked the third anniversary of the beginning of protests that eventually ousted former President Omar al-Bashir.

Chanting the "people are stronger and retreat is impossible," demonstrators gathered less than a kilometre from the palace, with some running into side streets to dodge volleys of tear gas being fired into the crowds. 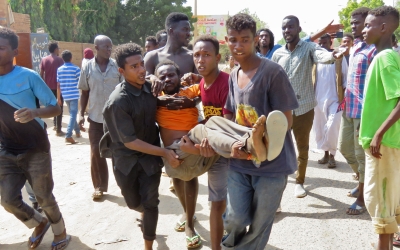 Sudan: The protester who had his leg shot off
Read More »

Witnesses said that protestors still managed to reach the gates of the palace, unlike previous demonstrations, but later encountered a new round of heavy tear gas. Speaking to Middle East Eye, one witness said protesters had made it into the palace, briefly

Security forces fatally shot a 16-year-old on Sunday in the head in the Sudanese city of Omdurman, the Central Committee of Sudanese Doctors said in a statement. This brings the death toll to 41 people who have died in protests since the 25 October coup, according to the committee.

Meanwhile, a total of at least 123 people were injured in Sunday's protests, according to the Sudanese Health Ministry.

"The people want the downfall of Burhan," protesters shouted against the current military chief, General Abdel Fattah al-Burhan, who led the coup on 25 October.

While an agreement to reinstate Prime Minister Abdalla Hamdok, who had been under house arrest, was announced on 21 November, the agreement has failed to quell civil unrest.

From in front of the presidential palace in Khartoum, one protester, Ezaldin Ali, told MEE that the resistance committees remain against any compromise with the army or Hamdok, adding that they will continue different methods of protests to bring the current government down.

'We are here now... until we defeat this military coup and bring back civilian rule'

"We raised our clear and radical slogans that no partnership with the army, no compromise and no negotiations will take place, so we will stand against the military ruling forever," he said.

Earlier, the notorious Rapid Support Forces had been deployed alongside the military and police to guard the presidential palace against protesters.

Images online also showed protestors breaking through a security barriers placed on the Mek Nimir bridge and Omdurman bridge to cross into Khartoum after it was earlier blocked by security forces.

On Sunday morning, witnesses had told Reuters that protesters were brought on buses from other states, including North Kordofan and Gezira, to join the protests in the capital.

Ahmed Mahmoud from the central Sudanese town of al-Hasahisa told MEE that he and his group walked more than 60 miles in four days in order to join the protests.

"We left al-Hasahisa four days ago and thousands of people from the villages all around walked as well … we entered Khartoum yesterday night and we are here now to stand with our brothers and sisters until we defeat this military coup and bring back civilian rule," he said.

Other cities also planned to mark the anniversary. Tear gas was thrown at protestors in Port Sudan, according to unconfirmed reports on Twitter.

Hamdok said in a statement on Saturday that Sudan's revolution faced a "major setback" and that stubbornness from all sides threatened the country's unity and stability.

"We face today a major setback to the path of our revolution that threatens the country's security, unity, and stability, which alerts us to the beginning of a backslide into a pit that leaves us neither a nation nor a revolution," Hamdok said. Protest organisers have however vowed, in a key slogan, "No negotiation, no partnership and no legitimacy".

Sunday's protest is the ninth demonstration against the coup despite the military reinstating Hamdok, who had been under house arrest, and releasing other high-profile detainees.

Protesters saw the move to bring back Hamdok as a betrayal of the revolution and have vowed to continue fighting against the military.