Preliminary agreement has raised hopes that lasting peace can be reached in restive Darfur, Blue Nile and South Kordofan regions Members of Sudan's transitional government have agreed to a framework for talks with rebel groups in Darfur, South Kordofan and Blue Nile state, prompting hopes that the country's ongoing political revolution could pave the way for a lasting peace in the restive regions.

The two sides met in Juba, the capital of South Sudan, earlier this week for talks mediated by South Sudanese President Salva Kiir, whose government and ruling party, the Sudan People's Liberation Movement (SPLM), have close ties with both rebel groups and civilian opposition leaders.

The announcement on Wednesday of a preliminary agreement after just two days of discussions is seen by many as an indication that the peace process, which had stalled for years under former Sudanese president Omar al-Bashir, may finally be moving in the right direction.

The negotiating team for the transitional government was headed by Mohamed Hamdan Dagalo, a member of Sudan's sovereign council and the head of the notorious Rapid Support Forces (RSF) militia who is also known as Hemeti. It also included members of the Forces for Freedom and Change opposition coalition. The terms of the agreement, which have been seen by Middle East Eye, commit all sides to a ceasefire as well as to the release and exchange of all prisoners of war arrested during the fighting.

It also lifts a travel ban that Bashir's government imposed on rebel leaders and paves the way for the participation of the rebels in institutions of the transitional government.

According to the agreement, talks will continue on 14 October with the aim of completing the peace process within the six-month period for which the transitional government was sworn into office at the beginning of September.

"A committee has been formed to make the required arrangements for the resumption of talks on 14 October. It will also follow up the issues of ceasing hostilities and the humanitarian situation in the war areas as well as following up the freeing of the POWs [prisoners of war]," it reads.

The Sudanese Revolutionary Front (SRF), which includes the Sudan People's Liberation Movement/North Sector (SPLM-N) headed by Mali Agar that fights the government in Blue Nile state, is one of the parties to the agreement.

Others include the Justice and Equality Movement (JEM), the Sudan Liberation Movement headed by Mini Arko Minawi (SLM-MM), which fights the government in Darfur, and the Beja Congress, which formerly fought the government in Eastern Sudan.

The Sudan People's Liberation Movement/North Sector, headed by Abdul Aziz Alhilu, which is considered the strongest rebel movement fighting the government in the Nuba Mountains, separately signed the same agreement with the government delegation.

A source within the government delegation said the deal was reached quickly in an atmosphere of reconciliation and consensus on all sides.

The source, who asked for anonymity because he is not authorised to talk to the media, told MEE that previous ties and contacts between the rebel leaders and members of the transitional government helped accelerate the talks.

The mediation of the South Sudanese ruling party, headed by Kiir, also made a big difference, he said.

"The atmosphere of the talks was very consensual as the different stakeholders were actually friends and old allies against the former regime of Omar al-Bashir and fought together against it," he said.

"So there is no basis for conflicts ... as we are all aiming at the same objective of lasting peace and stability, and democracy."

Mohamed Hassan Haroun, a spokesperson for the Darfur-based SLM-MM, told MEE that the signing of the initial agreement in Juba was a positive step that needed to be built on to secure a final peace settlement.

"For sure we trust our allies in the Freedom and Change [movement] and the new government more than the government of Bashir. We only stressed the importance of addressing all of the root causes of the war in the Sudan," he told MEE.

However, the Sudan Liberation Movement (SLM/AW), another Darfuri rebel group headed by Abdul Wahid Alnur, rejected the entire agreement, suggesting it was no different to the peace terms offered by Bashir's government.

"We are rejecting the current agreement because it is based on the constitutional declaration that made a partnership between the military and other forces loyal to the former regime," Abdul Rahman Alnair, a spokesperson for the SLM/AW.

"The composition of the sovereignty council shows that the upper hand is in the hand of the military component in the council, which is loyal to the former regime."

"I am very delighted to be here in my second home, Juba. We are looking for a very strategic, very distinguished relationship between our two nations, and the sky is the limit for this relationship," Hamdok said.

In a joint press conference, Sama Abdullah and Awut Deng, the foreign ministers for Sudan and South Sudan, respectively, said they had discussed outstanding issues between the two countries, including the disputed Abyei region and the demarcation of the borders.

South Sudan opposition leader Riek Machar, who is based in Khartoum, also met President Kiir in Juba on Wednesday after travelling there with the Sudanese delegation.

But South Sudan was then gripped by its own civil war in which hundreds of thousands of people are believed to have died. 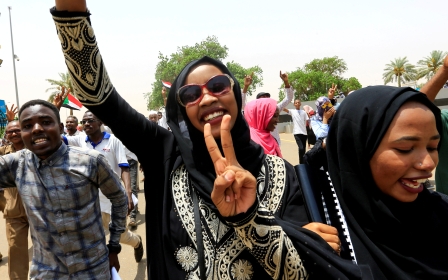