Sudan's Bashir convicted of corruption, his supporters take to streets Supporters of Sudanese former president Omar al-Bashir shout slogans during a protest outside the courthouse that convicted him on corruption charges in Khartoum, Sudan, on 14 December 2019 (Reuters)

By
Mohammed Amin
in
Khartoum

Supporters of ousted Sudanese president Omar al-Bashir blocked off parts of the capital Khartoum on Saturday after he was convicted of corruption.

Thousands of his supporters made a rare showing to oppose the proceedings against Bashir, chanting against the court and the popular protest movement that forced him out after a three decades rule.

Bashir, 75, was found guilty of corruption and illegal possession of foreign funds and was sentenced to two years in a community reform centre, on account of his old age, a decision that prompted anger among Sudanese whose protests had led to the end of his rule in April.

As they withdrew from the court, Bashir's lawyers shouted that the verdict was politically motivated.

They were angered when the judge mentioned the case of businessman Magdi Mahjoub, who was executed in 1989 after a one-day trial inside a military prison, on the basis that he dealt in foreign currency.

"The judge made the ruling based on political motives, but, despite that, we still have confidence in the Sudanese judiciary," Tahir told reporters.

Bashir's supporters borrowed the anti-Bashir protest movement's iconic chant "just fall" and redirected it against the government of Abdalla Hamdok, installed as the civilian prime minister in the current transitional government.

"Bashir is the president of this country. What happened is a conspiracy by the army," Mahjob Hassan, 34, wearing a top printed with images of Bashir, told Middle East Eye.

"Bashir was an elected president and his ousting is unconstitutional."

At the end of November, the transitional government decided to dismantle Bashir's National Congress Party (NCP).

At counter-protests in Khartoum, Bashir's conviction was welcomed but the sentencing was questioned.

“Although we are not convinced by this verdict, we believe it's a big political and ethical defeat for the Islamists that their leader Bashir is [convicted of being] corrupt and stealing Sudan's money," said Marwa Ahmed, a 23-year-old student.

The Sudanese Professionals Association, which became a leading organising force in the protest movement, welcomed the ruling but said it is "certainly not the end of the day".

It said it has teams working on a list of charges they want Bashir to face, including for crimes against humanity in Darfur, the 1989 coup that brought him to power and the torture and killing of prisoners.

Bashir is wanted by the International Criminal Court over accusations of genocide in Darfur, where the United Nations has estimated his forces have killed at least 300,000 people.

Protesters have demanded Bashir be handed over to the ICC, but the military leaders who overthrew him have refused to hand him over, even after signing a power-sharing agreement with civilian forces.

The Bahri Revival Committees, part of a network of neighbourhood protest units, said before the judgement that it would be watching to see whether they were satisfied and, if not, would announce protests for Sunday.

"It's not about the stealing of public money, this is only a small crime compared to the genocide and war crimes Bashir has committed in Darfur," Osman Adam Khamis, a youth leader in the Abushok camp for displaced people in North Darfur.

"We are still waiting to see him in front of the ICC for the crimes he committed against our people."

The Sudanese security forces were put on high alert on Saturday ,with police deployed at sensitive areas in the capital and citizens warned to keep off the streets.

The army said it would take a neutral position between the various parties and would allow freedom of expression.

It also announced in a statement that it was closing all roads leading to the army headquarters in the centre of the city, which was the site of a months-long sit-in that pushed Bashir from power. 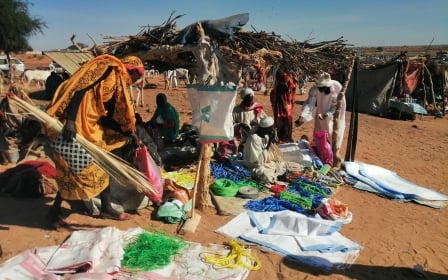 Sudan in Transition
PM Hamdok says Sudan has reduced its troop numbers in Yemen to 5,000