New research estimates that the Syrian government has pocketed $0.51 of every aid dollar sent to the country 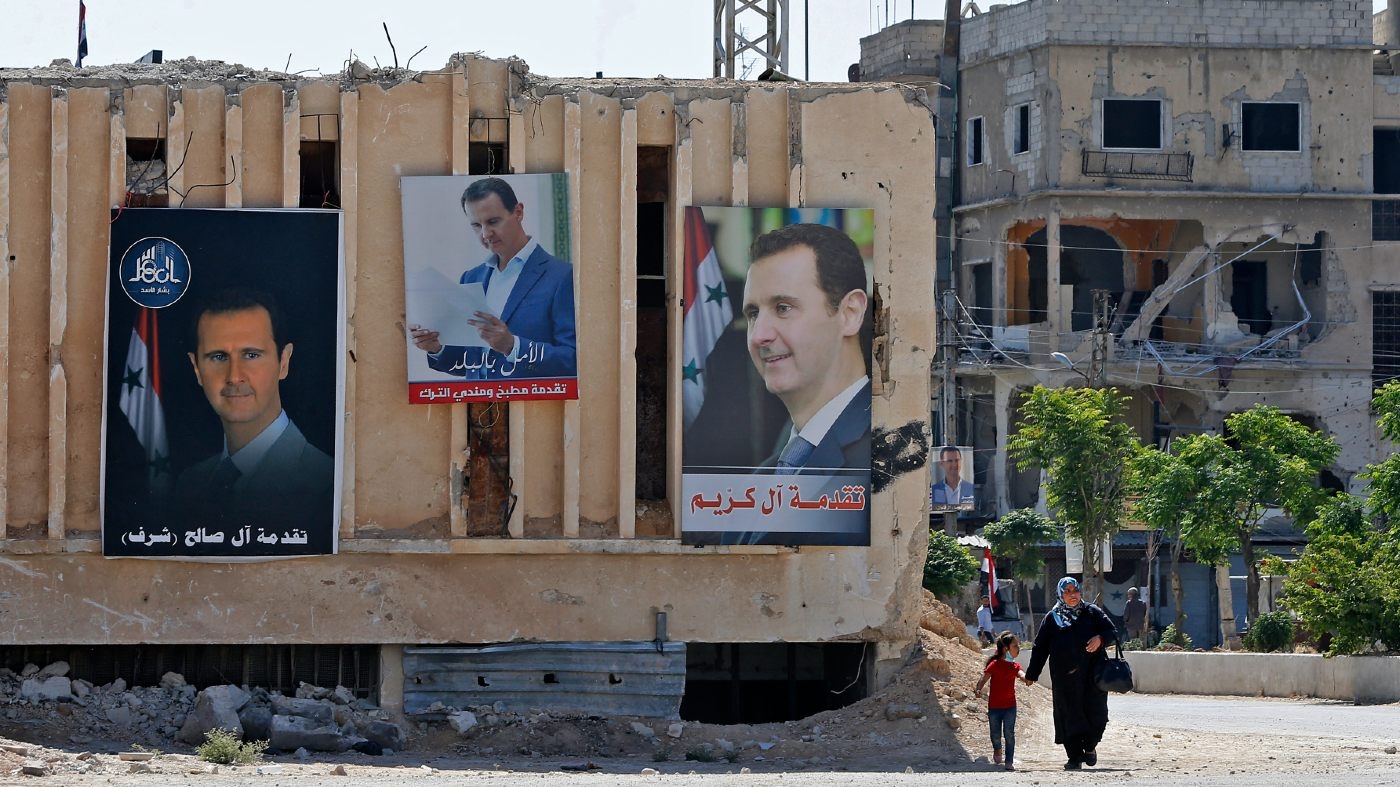 Portraits of Syrian President Bashar al-Assad hang on buildings at a polling station in Douma, near the capital Damascus on 26 May 2021 (AFP)
By
MEE staff

The Syrian government has been accused of siphoning millions of dollars worth of aid money last year by forcing UN agencies to use a lower exchange rate when making transactions.

New research by the Washington-based think tank Centre for Strategic and International Studies (CSIS), the Operations and Policy Centre think tank and the Centre for Operational Analysis and Research found that the Central Bank of Syria had pocketed $0.51 of every aid dollar sent to Syria. The research analysed hundreds of UN contracts to procure goods and services for people living in government-held areas in the country, where the vast majority live in poverty after the Syrian pound crashed.

The central bank, sanctioned by the United Kingdom, United States and the European Union, gained roughly $60m by forcing aid agencies to adhere to the lower exchange rate in 2020, making UN contracts a lucrative source of income for President Bashar al-Assad and his government allies who have also been hit by sanctions.

"This shows an incredibly systematic way of diverting aid before it even has a chance to be implemented or used on the ground," Natasha Hall, who helped compile research for CSIS, told The Guardian.

"If the goal of sanctions overall is to deprive the regime of the resources to commit acts of violence against civilians and the goal of humanitarian aid is to reach people in need, then we have this instance … where aid is a complete contradiction to those two stated goals."

UN funding to Syria has been funnelled via various agencies, including the Office for the Coordination of Humanitarian Affairs (OCHA), the World Food Programme, the UN Development Programme, the UNHCR and Unicef.

A spokesperson for UN agencies, Danielle Moylan said the UN "welcomed independent scrutiny of its humanitarian operations in Syria".

"The majority of UN's procurement for our humanitarian response in Syria is made in international and regional markets and, therefore, not affected by the Syrian exchange rate. Otherwise, as is the case in any country, the UN in Syria is required to use the official exchange rate," the Guardian quoted her as saying.

Country-wide protests against President Bashar al-Assad in March 2011 were brutally repressed, developing into a bloody civil war that has killed at least 350,000 people, according to the UN - and over half a million, according to the UK-based Syrian Observatory of Human Rights.

The conflict has displaced 13 million Syrians, an estimated 6.3 million of them fleeing abroad.

Syria’s economy has been devastated by a decade of conflict and international sanctions, with the World Bank estimating that it has shrunk by more than 60 percent since 2010.

According to the UN, more than 13 million Syrians are in need of humanitarian assistance and close to 90 percent are living below the poverty line.