Syrian President Bashar al-Assad received the United Arab Emirates' foreign minister Sheikh Abdullah bin Zayed on Tuesday, the most senior Emirati official to visit Syria in the decade since the civil war erupted in the country in 2011.

Bin Zayed arrived with a senior delegation, according to al-Manar TV, which is run by Lebanon's Hezbollah, an ally of Assad. The UAE, which has previously backed rebels trying to topple the Syrian president, has been at the forefront of efforts to normalise relations with Syria. Earlier this year, it even called for Syria to be readmitted to the Arab League and it reopened its embassy in Damascus three years ago.

A close ally of the UAE, the United States does not support the Gulf state’s efforts to normalise relations with Assad until the civil war ends. But in recent years Gulf countries have been keen to rekindle relations with the Syrian president as concerns about alternative regional influences from countries like Iran and Turkey deepened.

The UAE has hosted Syria at the Dubai Expo trade fair and multiple calls between Assad and Emirati Crown Prince Mohammed bin Zayed Al Nahyan were reported in recent months.

At the beginning of this month, the UAE’s Ministry of Economy tweeted that Syria is its most prominent global trade partner, reaching 1bn dirhams ($272m) in non-oil trade in the first half of 2021.

Syria remains unstable and crippled by poverty and western sanctions, but Assad is in control of most of the country, making him a viable ally in the region, despite the previous animosity between himself and Arab leaders.

#ًUAE and #Syria agree on future plans to enhance economic cooperation and explore new sectors in the next stage.#MoE pic.twitter.com/t44yVAav9e

At the start of October, Jordan’s King Abdullah received a call from Assad, according to a statement by the royal palace, which said that it was the first communications of its kind since the start of the Syrian conflict.

The Egyptian foreign minister met with his Syrian counterpart in September for the first time since 2011. Meanwhile, Bahrain opened its embassy in Syria in 2019 and Oman returned its ambassador to Damascus in 2020.

The detente is happening almost 11 years after country-wide protests against Assad were brutally suppressed, devolving into a bloody civil war that has killed more than 350,000 people, according to the UN - which has admitted that the real toll is likely to be much higher.

The British-based Syrian Observatory of Human Rights, meanwhile, estimates that more than half a million Syrians have been killed in over a decade, including military casualties.

Assad was re-elected president for a fourth time in May, with 95.1 percent of the vote, in an election that has been widely denounced as fraudulent. 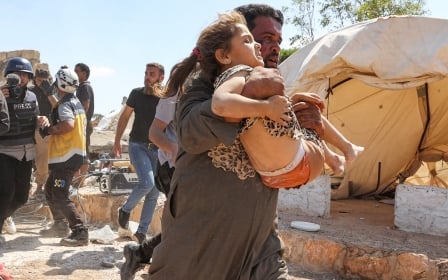