A taste of home for Syrians in Beirut A chef wraps a chicken Shawarma sandwich at a restaurant in Jounieh, north of the Lebanese capital Beirut on 17 October, 2014 (AFP)
By
AFP

BEIRUT - Not long ago chef Abu Wassim saw himself as king of the shawarma in Damascus with students, businessmen and even actors queueing outside his stand for a bite of his succulent wraps.

Today, he is a refugee in Beirut trying to make ends meet and bringing a taste of home to fellow Syrians who sought safety in Lebanon.

"In Damascus, I used to sell 3,000 beef or chicken shawarma sandwiches a day," the 48-year-old said wistfully while serving customers at his small restaurant in Beirut's bustling Hamra district.

While in Syria he made a 50 percent profit on each sandwich, in Beirut he scrapes 15 percent.

"Every day, I give away 40 wraps to the poor," he added. "When a poor Syrian woman with three kids comes begging for help I can't turn away."

His story is by no means unique in Lebanon where a number of Syrian restaurants and eateries have sprung up, tapping into the rich culinary tradition core to the Middle Eastern country's identity.

On the menu are Aleppo's famed cherry kebab, hindi kebab with tomato sauce and pomegranate molasses or a spicy red pepper dip known as mohammara -- all aimed at winning over Lebanese taste buds or offering home comforts to Syrian exiles.

'Reminds me of Aleppo'

More than three million people have fled Syria since the uprising began in March 2011, morphing into a multi-sided civil war that has killed nearly 200,000 people.

With more than 1.1 million Syrian refugees, Lebanon has the most refugees per capita in the world, and the influx has created some resentment in a country of four million already facing economic and political challenges.

Mindful of the strain on his host country, Abu Wassim said he buys all his ingredients in Lebanon and several of his employees are Lebanese.

"I buy everything locally: the chicken, the meat, the spices," he said.

In the same district of Hamra, another restaurant offers famed delicacies from Aleppo.

Beit Halab, or Aleppo House, has become a sort of haven for those forced to flee Syria's second city who come here to soak up the scents and aromas of home.

"It reminds me of Aleppo. I even meet people from Aleppo here whom I had not seen for a very long time," said Aisha, a blue-eyed 20-year-old wearing a white headscarf who fled to Beirut from Syria's former economic hub.

Beit Halab manager Mosaab Hadiri, who fled Aleppo seven months ago, can barely hold back the tears while looking at the pictures of his city that hang on the restaurant walls.

"In Aleppo, restaurants would stay open until 4:00 am. It breaks my heart to watch the news," he said.

But the mere sight of the dishes served at Beit Halab makes Hadiri's eyes light up.

Mouth-watering kebabs are on display here, including the Aleppo variant, served with salt and black pepper, as well as cherries.

There is also the kheshkhash kebab served with red pepper and pine nuts as well as several types of kibbeh, a traditional meat and spice dumpling made with bulgur. One variant is cooked in yogurt, another is stuffed with quince.

Here too, chefs have gone out of their way to adapt.

"In order to penetrate the Lebanese market, you have to offer something special, and the cuisine of Aleppo is definitely unique," said Hadiri.

"But we have also adapted to local tastes, and we use less fat here," he chuckled.

Like fellow restaurateurs, he has had to juggle with a steep increase in labour cost. In Syria he paid employees 10 dollars (eight euros) a day, while in Lebanon it is 30 dollars.

The popularity of cuisine from Aleppo and Damascus means that even Lebanese restaurants are hiring Syrian chefs, while local butchers have started to offer specialities from the war-torn country.

But in spite of the success, Hadiri has only one wish -- to return to Aleppo.

"We cannot forget our roots," he said. "The secret to our cuisine lies in the flavour, the mix of spices.

"And nothing can replace the taste of home." Inside Lebanon
Fury in Lebanon over tweet criticising the army 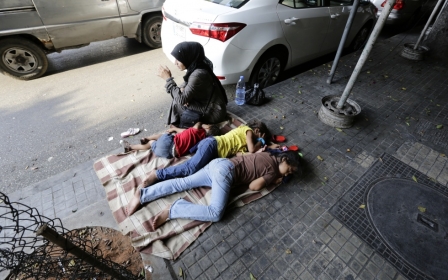