US President Donald Trump said “nobody” has blamed Saudi Crown Prince Mohammed bin Salman for the murder of journalist Jamal Khashoggi, following a meeting between the two at the G20 summit in Japan.

His comments contradict both an assessment by the CIA and a recent UN expert report which both judged that the crown prince must have been aware of the operation to kill the Saudi journalist in the country’s consulate in Istanbul in October.

When asked by a reporter about whether he has discussed the killing with the crown prince during their meeting, Trump said that "nobody so far has directly pointed a finger at the future king of Saudi Arabia.”

"I'm extremely angry and unhappy about a thing like that taking place,” he said.

“But as of this moment, more than 13 people are being prosecuted and I hear the numbers are going to be going up."

He added that Saudi Arabia had been a “terrific ally” and praised MBS for making advancements in women’s rights. “They're creating millions of jobs in this country,” he said.

“They are ordering equipment, not only military equipment, but $400bn worth and even more than that over a period of time worth of different things.”

The independent rights expert, who does not speak for the United Nations but reports her findings to it, called on UN Secretary General Antonio Guterres to initiate an international criminal investigation into the case.

"I don't think the world can afford to turn a blind eye or to turn the page on a killing such as that of Mr. Khashoggi," Callamard said.

Riyadh initially said it had no knowledge of Khashoggi's fate, but later blamed the murder on rogue agents, and Saudi prosecutors have absolved the crown prince of responsibility.

But Callamard's report said probes by Saudi Arabia and Turkey "failed to meet international standards regarding the investigation into unlawful deaths".

Two of those suspected of high-level involvement in the killing of Khashoggi - Saud al-Qahtani, a top aide to MBS, and the country's ex-deputy army chief, Ahmed al-Assiri - have been dismissed from their posts but are not facing prosecution in the kingdom.

The CIA also concluded in November that MBS had ordered the killing of Khashoggi.

MBS's visit to the G20 summit was heavily promoted by Saudi social media. 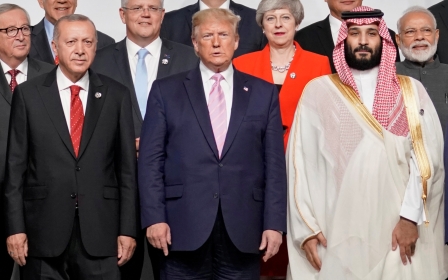