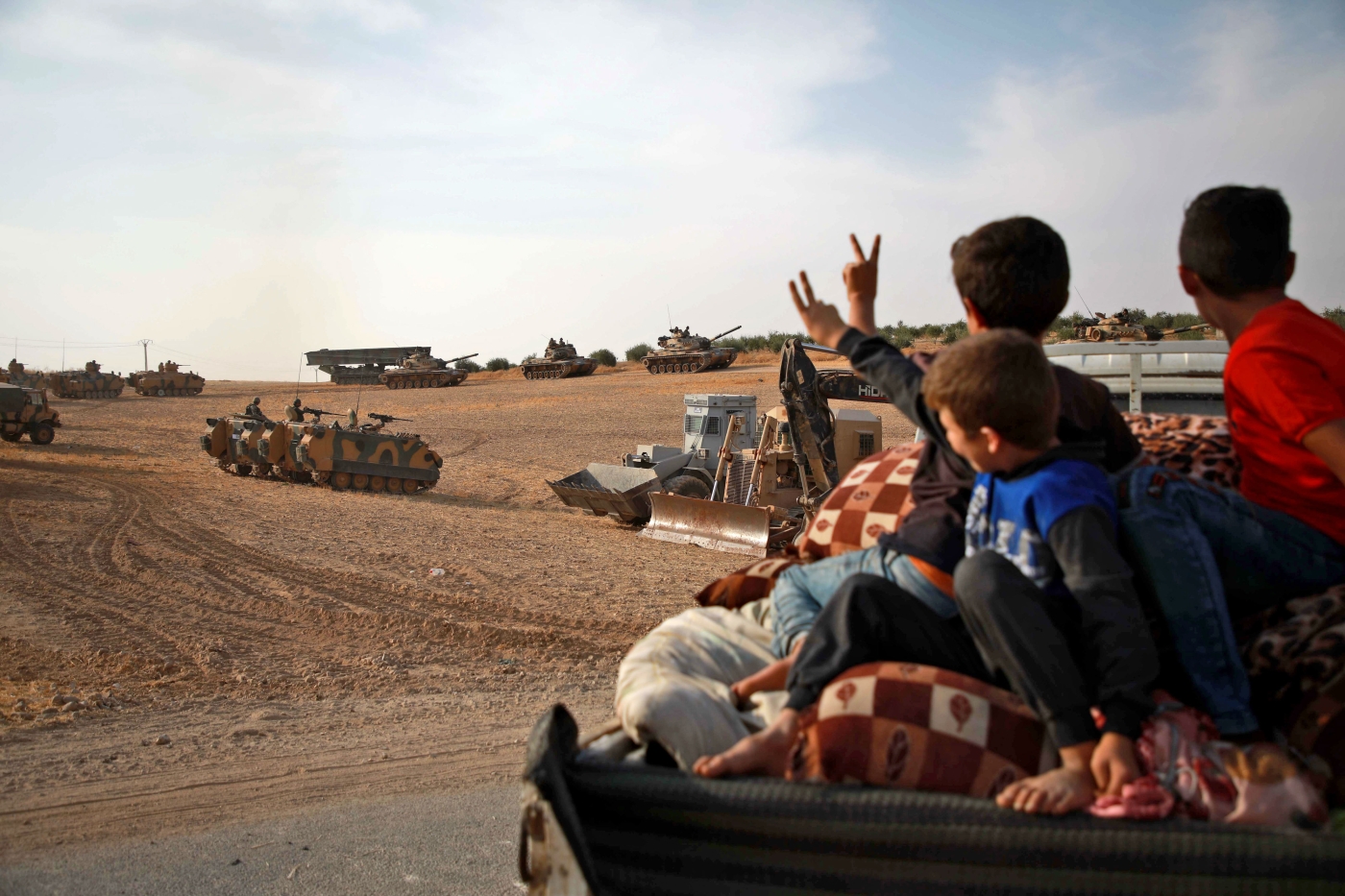 Eight days after Donald Trump appeared to give the green light for a Turkish military offensive in northern Syria, the United States has imposed sanctions on various Turkish officials and government agencies over the incursion.

Top US officials also called on Turkey to end its military operation on Monday, offering to mediate between Ankara and Syrian Kurds.

Washington's sanctions will hit three Turkish government ministers as well as the ministries of energy and defence, US Treasury Secretary Steven Mnuchin said on Monday.

"The president has been very clear. These sanctions are very, very strong. He is prepared to remove these sanctions if there is the necessary action on Turkey's point," Mnuchin told reporters outside the White House.

The measures will restrict US financial dealings with the targeted Turkish individuals and institutions - with waivers for humanitarian organisations and US government departments, Mnuchin said.

The sanctions also will not affect Turkey's ability to buy fuel.

Earlier on Monday Trump said the United States is prepared to "swiftly destroy" Turkey's economy if Ankara continues its offensive in Syria.

The US president had decided last week to withdraw US troops from northern Syria, effectively giving Ankara a nod of approval to launch a military operation against Kurdish fighters in the area. But on Monday, he denounced the Turkish incursion.

'Unfortunately, Turkey does not appear to be mitigating the humanitarian effects of its invasion'

"Turkey's military offensive is endangering civilians and threatening peace, security, and stability in the region," Trump said in a statement.

The US president, who faced a major backlash domestically and internationally from allies and enemies alike, had announced the plan to pull US soldiers from northern Syria after a phone call with his Turkish counterpart Recep Tayyip Erdogan earlier this month.

On Monday, Trump said he had warned Erdogan that Turkey's plan will worsen the humanitarian crisis in the region.

"Turkey must ensure the safety of civilians, including religious and ethnic minorities, and is now, or may be in the future, responsible for the ongoing detention of ISIS fighters in the region," the statement said.

"Unfortunately, Turkey does not appear to be mitigating the humanitarian effects of its invasion."

Dozens of members of Congress, including major figures in Trump's own Republican Party, had denounced Trump for withdrawing American soldiers from northern Syria.

The president's critics accused him of abandoning the US-backed Kurdish groups that played a major role in the fight against the Islamic State (IS) group to please Erdogan.

Turkey views Kurdish fighters in northern Syria, namely members of the People's Protection Units (YPG), as a threat to its national security.

The US president, however, appears to be backtracking from his initial neutral stance that his detractors said enabled the Turkish assault.

When the White House released a statement on 6 October announcing the US troops' pullout, it did not mention any US opposition to the planned incursion. Still, a day later Trump said the Turkish offensive was a "bad idea".

US Vice President Mike Pence revealed on Monday that Trump spoke on the phone with a top Syrian Kurdish general, who voiced concerns over Turkish forces approaching the city of Kobane.

Pence added that Trump later talked to Erdogan as well, offering to mediate between Turkey and the Kurds.

'Erdogan ordered a unilateral invasion of northern Syria that has resulted in widespread casualties, refugees, destruction, insecurity, and a growing threat to US military forces'

- Mark Esper, US secretary of defence

"President Trump communicated to him very clearly that the United States of America wants Turkey to stop the invasion, to implement an immediate ceasefire and to begin to negotiate with Turkish forces in Syria to bring an end to the violence," Pence said.

Pence said Trump ordered him to travel to Turkey in the "immediate future" to help broker a ceasefire that would "bring the bloodshed to an end".

Later in the day, the US Department of State confirmed that Trump has signed an executive order to "press Turkey to halt its military offensive against northeast Syria".

"To avoid suffering further sanctions imposed under this new executive order, Turkey must immediately cease its unilateral offensive in northeast Syria and return to a dialogue with the United States on security in northeast Syria," Secretary of State Mike Pompeo said in a statement.

Trump had said that the decree would allow sanctions against Turkish officials "obstructing a ceasefire".

"The order will enable the United States to impose powerful additional sanctions on those who may be involved in serious human rights abuses, obstructing a ceasefire, preventing displaced persons from returning home, forcibly repatriating refugees, or threatening the peace, security, or stability in Syria," Trump said in a statement.

"The order will authorise a broad range of consequences, including financial sanctions, the blocking of property, and barring entry into the United States."

The US president said he will also increase steel tariffs on Turkey and pause negotiations over a $100bn trade deal.

The defense department joined Trump in his criticism of the Turkish offensive on Monday, calling the incursion "unacceptable" and saying that it has led to the release of many Islamic State militants.

"Despite the opposition and repeated warnings from the United States and the international community, Turkish President Erdogan ordered a unilateral invasion of northern Syria that has resulted in widespread casualties, refugees, destruction, insecurity, and a growing threat to US military forces," Pentagon chief Mark Esper said in a statement.

Esper added that he will be urging Washington's Nato allies to take "collective and individual diplomatic and economic measures" against Turkey, which is also a member of the North Atlantic alliance. Syria War
US to withdraw remaining troops from northern Syria