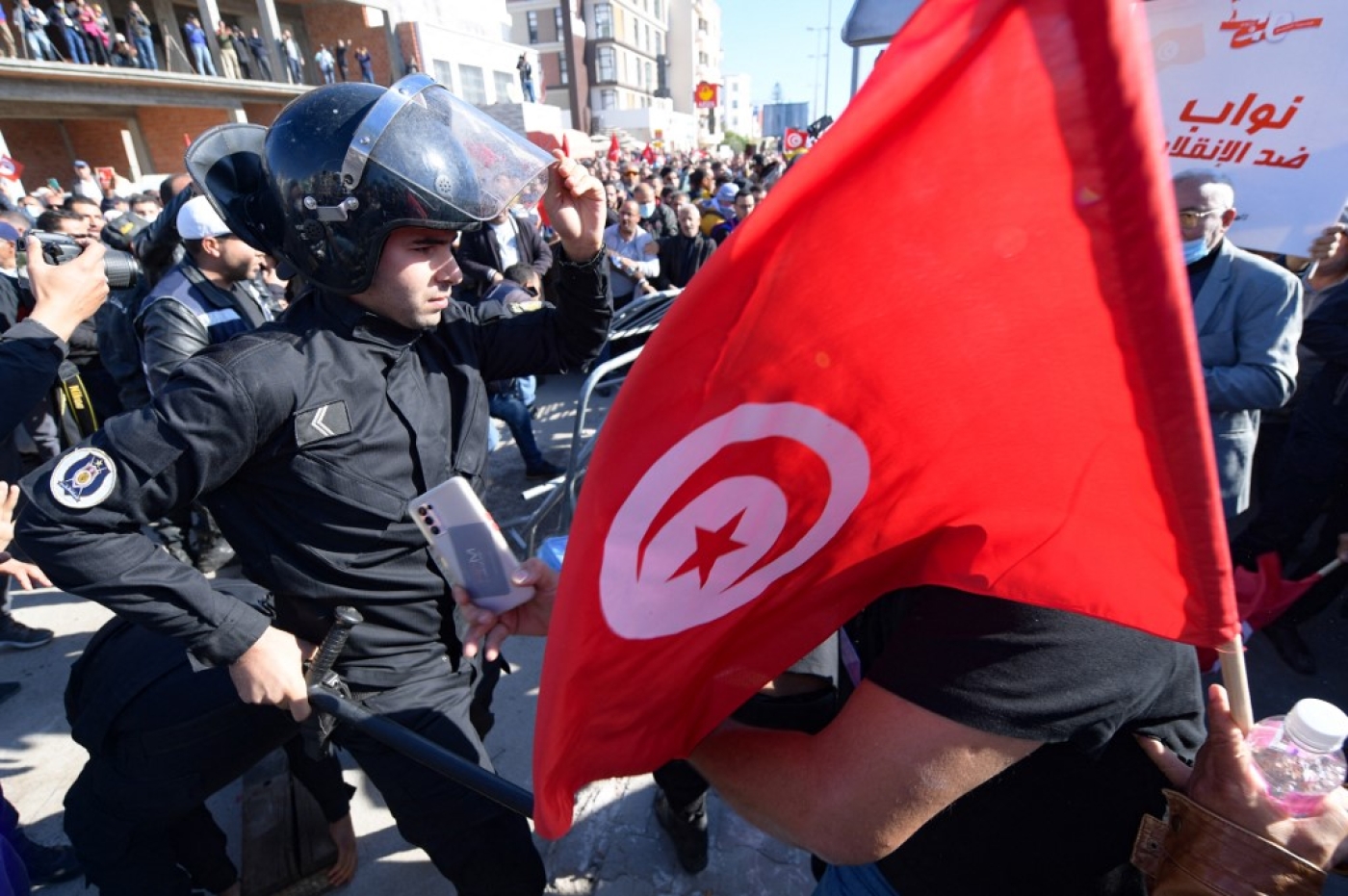 Tunisian demonstrators remove metallic barriers as they scuffle with security forces during a protest in front of parliament in the capital Tunis, 14 November 2021 (AFP)
By
MEE staff

Tunisian President Kais Saied on Tuesday demanded his government to pay salaries of civil servants on time, in the first acknowledgment of the late salaries crisis in the country.

According to workers unions, salaries of civil servants have been delayed by more than 10 days. It is customary in Tunisia to pay wages in the middle of the month.

On Monday, two teachers' unions, both members of the powerful union federation (UGTT), denounced the delay in paying employees until the end of the month.

Meanwhile, Habib Mizouri, the secretary general of the General Federation of the Post Office, affiliated with the UGTT, revealed that the state has resorted to the national postal service to pay the wages of its employees for the month of January.

In a statement to al-Diwan radio on Monday, Mizouri said that the Tunisian Post pumped 700 million dinars ($241.1m) from its savings into the state treasury, to help it pay the salaries of employees.

According to Mizouri, this is "not the first time that the state has resorted to the Post to inject resources to the public treasury". He accused the state of "siding with the banks at the expense of the Post".

In a statement following Said's meeting at Carthage Palace with the finance minister, Siham Boughediri, and Trade Minister Fadila Rabhi, the president attributed the economic crisis in the country to actions by “the opponents of the Tunisian people”.

“The head of state indicated that what is happening is not a coincidence, but rather premeditated and pre-planned actions by those who are shaken by nostalgia to the era before 25 July 2021.”

The president’s statement referred to his controversial measures announced in July, and revealed by Middle East Eye two months earlier, including the suspension of parliament and the sacking of the prime minister, in moves his opposition denounced as a “constitutional coup”. Saied cited skyrocketing unemployment, rampant corruption and the coronavirus pandemic as reasons for his power grab.

However, Tunisia remains in a morass, and a lack of concrete action has seen many supporters of his power grab become critical of the president and his policies.

Saied on Wednesday blamed his opponents for the disruption in the distribution of basic foodstuffs and the increase in prices, following a three percent increase in the price of fuel on Monday and amid reports of shortages of bread and cooking oil.

"Each party must be held fully responsible, because the opponents of the Tunisian people aim to abuse it in all aspects of life. Sometimes it is related to life medicines, and sometimes to gasoline, and these days to a number of basic materials such as wheat and subsidised oil."

His finance minister, meanwhile, said that the government will be able to pay the salaries on time in the coming months.

Saied's July measures have been followed by a crackdown on the opposition and their protests. The deputy head of Ennahda, the largest party in the now-suspended parliament, remains in custody at a hospital in Tunisia, in circumstances denounced by Human Rights Watch and the United Nations.

The UGTT, with more than one million members representing an estimated five percent of the Tunisian population, did not initially reject Saied's power grab, but later became more critical of the president's moves.