Berke Gok and Perit Ozen expected to be released from Istanbul's high-security Silivri prison, but remain banned from travel A Turkish court on Friday ordered the release of two university students after they spent three months in jail over campus protests against the government's appointment of a rector at Istanbul's Bogazici University.

Berke Gok and Perit Ozen were expected to be released from Istanbul's high-security Silivri prison later on Friday, lawyer Gokhan Soysal told the DPA news agency, but the trial against them and 12 other students will resume on 21 March.

The two students were jailed pending trial after they were charged with violating the law regarding demonstrations, preventing public officials from doing their duty, and intercepting a vehicle, among other alleged crimes.

While the court did order their release in the first hearing of a broader case, it also imposed a travel ban on the two students.

Ahead of the hearing on Friday, students gathered in support of the defendants near Istanbul's main court, holding signs demanding their freedom.

Burcin Sahan, a lawyer for the pair, said after the hearing that "judicial harassment" against the students needed to end.

The defendants were among a group of protesters who in October blocked Rector Mehmet Naci Inci's car. One person climbed on the car, according to the Istanbul governor’s office.

Sergey Lagodinksy, a member of the European Parliament, said the release was "great news" and called their detention "absolutely unjustified".

"Expressing your opinion publicly and peacefully is a fundamental right," he said on Twitter.

Last August, Turkish President Recep Tayyip Erdogan appointed Inci as rector of Bogazici University months after the appointment of the previous rector, Melih Bulu. Inci's appointment was followed by mass protests in the university and across the country over fears the government was threatening the independence of the highly regarded institution.

Inci's appointment ignored an internal election held by faculty members at the university, which overwhelmingly rejected the government-backed candidates for the role.

Students and faculty members at the Bogazici University, some of whom have gathered daily with their backs turned on the rector’s building, have protested throughout the past year and said the demonstrations would continue until a rector was chosen by university members and academic freedoms were secured.

Numerous people have been targeted in connection with the protests and police have used force against peaceful demonstrators. Erdogan has claimed protesters had links to terrorism.

A separate trial against 97 defendants will resume next week. 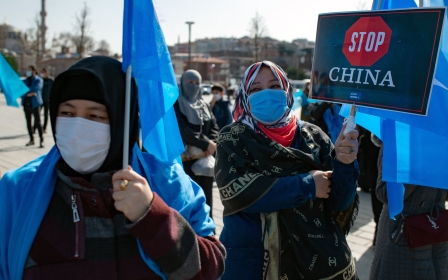