Turkish President Recep Tayyip Erdogan achieved a long-time dream of his on Friday by inaugurating a mosque built on Istanbul’s famous Taksim Square, ending decades of symbolic struggle between secularists and conservatives over the fate of this valuable plot.

Since the 1950s, successive conservative governments have wanted to build a mosque in the area that has historically hosted entertainment venues such as bars, dance clubs, cinemas and theatres.

Conservatives living in the neighbourhood have long argued that a new mosque was a need for Muslims living in the area because a small 16th-century mosque down Istiklal Street, and another smaller one, do not offer enough space to host prayers, especially during Friday sermons. Others have opposed such arguments, saying that it would change the square’s cultural fabric.

“We wanted to build this mosque when I was a mayor [in 1994], but we couldn’t do it because of the 28 February process,” Erdogan said in the opening ceremony on Friday, referring to the military intervention that toppled the Islamic-rooted government in 1997 and led to his arrest.

It was clear that the government wanted to open the mosque on a Friday, the Islamic holy day, and one day before the anniversary of Istanbul’s conquest by the Ottomans in 1453.

Whether purposefully or not, the date also coincides with the anniversary of the 2013 Gezi Park protests, in which people demonstrated nationwide to oppose Erdogan’s plans to destroy a valuable green area near Taksim Square to rebuild an Ottoman-era military barracks. Eight people died and nearly 9,000 people were wounded during months-long clashes between police and protesters.

Erdogan on Friday said that he could not build the mosque during his time as prime minister either because of “terrorists that stood in the way,” in reference to the protesters. He also highlighted that there are many churches but not many mosques in this neighbourhood.

The neighbourhood, known as Beyoglu, has been an important cultural and trade hub for non-Muslim communities since Ottoman times. Many foreign states, such as France, Germany and the UK, established their foreign missions in Beyoglu in the 19th century, while minorities including Greeks, Armenians and Jewish communities owned properties, including temples and businesses.

However, after the collapse of the Ottoman Empire, Beyoglu became the new centre of Istanbul, and under the new secular republic, the city was gradually Turkified and started being frequented by Muslims.

When thousands plundered the shops and homes of non-Muslim minorities in 1955, in riots known as the 6-7 September events that followed a false allegation that the home of Turkey's founder Mustafa Kemal (Ataturk) in Salonica had been bombed, the Turkification of the neighbourhood was almost completed.

Currently, the number of non-Muslim residents in the area is immeasurably low.

Many conservative have since repeatedly pointed out that the Hagia Triada Greek Orthodox Church greets Istanbulites in a square that has no trace of Islamic heritage other a small mosque in an alleyway.

Erdogan also criticised the main opposition party CHP for blocking past attempts to build a mosque in the area while Istanbul’s current mayor Ekrem Imamoglu, a CHP member, was present for the ceremony.

Although Erdogan lost control of the municipality in 2019 to Imamoglu, who defeated Erdogan's AKP party in two elections with an overwhelming majority, that did not stop him making significant changes in the city.

The president in the past few years has been taking several steps to realise his ambitions in Istanbul. In 2019, he opened the Grand Camlica Mosque that was built on top of one of Istanbul’s remaining green hills and is visible to the entire European side of the city. The following year, he reconverted the Hagia Sophia into a mosque.

Erdogan called the Taksim Square Mosque as his “third spiritual heritage” for the city.

Hundreds of Istanbul residents - who also attended the prayers outside the mosque in the square, praying on mats that were distributed for free -  showed support to the president by clapping and shouting his name in the very square that has been closed to demonstrations for years now. 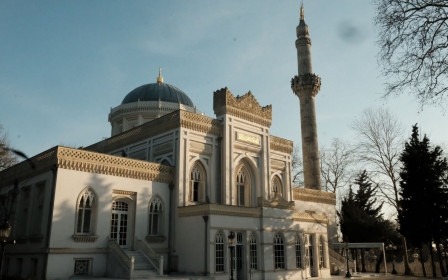 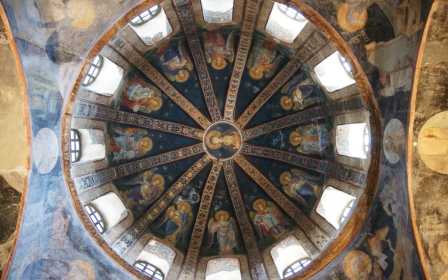 Religion
Turkey turns another former Byzantine church into a mosque 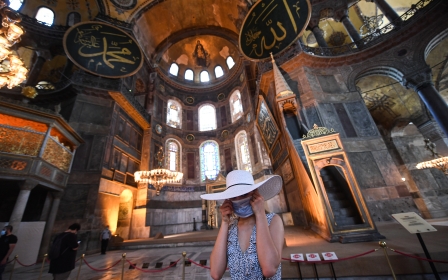