An explosion over the Syrian town of Ras al-Ain as seen from the Turkish border town of Ceylanpinar, Sanliurfa province on 12 October (Reuters)
By
MEE and agencies

A Kurdish spokesperson, however, denied the Turkish defence ministry's claim and said that its fighters had temporarily pulled back from the town.

"Ras al-Ain is still resisting and clashes are ongoing," said an official of the Kurdish-led Syrian Democratic Forces (SDF).

An AFP correspondent in the area said Turkish troops and allied Syrian rebels had entered the town but had yet to capture it.

The UK-based Syrian Observatory for Human Rights too reported that Ras al-Ain, a major target of the Turkish offensive, had yet to be overrun.

Ras al-Ain would be the first town to fall to Ankara's forces since the launch of its cross-border offensive on Wednesday.

This latest development comes as the Turkish-backed rebels on Saturday said they had taken control of a road connecting Syrian towns along a section of the border where the Turkish army is waging it's offensive.

SDF officials could not be immediately reached for comment.

Youssef Hammoud, a spokesman for the Turkey-backed National Army, told Reuters that fighters had cut the 712 road that links Tel Abyad and Ras al-Ain - the focal points of the Turkish offensive.

The road hugs the border in some places and in others extends a number of kilometres into Syria.

"This advance was on a new and surprise front ... between Tel Abyad and Ras al-Ain. On this front, they were able to cut the roads linking together Suluk, Tel Abyad, Ras al-Ain with the villages in the area," he said in a statement to Reuters. He said 18 villages had been captured in the advance.

Meanwhile, Turkish forces stepped up their bombardment around Ras al-Ain on Saturday, the fourth day of an offensive against a Kurdish militia, after US troops in the region came under artillery fire from Turkish positions.

The move, which was preceded by a promise by US President Donald Trump to withdraw US troops from the area, has provoked outrage from some observers who fear a massacre will be carried out against Kurds in northern Syria.

The US has ramped up its efforts to persuade Ankara to halt the incursion against the US-backed Kurdish forces, saying Ankara was causing "great harm" to ties and could face sanctions.

Turkey opened its offensive after Trump spoke by phone on Sunday with Turkey's President Recep Tayyip Erdogan and withdrew US troops who had been fighting alongside Kurdish forces.

On Friday evening, Erdogan dismissed mounting international criticism of the operation and said Turkey "will not stop it, no matter what anyone says".

On the frontlines, thick plumes of smoke rose around Ras al-Ain, one of two Syrian border towns targeted in the offensive, as Turkish artillery bombarded the area on Saturday, said a Reuters reporter across the frontier in the Turkish town of Ceylanpinar.

Intense gunfire also resounded from within the town of Ras al-Ain itself, while warplanes could be heard flying overhead, he said.

It was quieter at Tel Abyad, the operation's other main target some 120 km to the west, with only occasional shell fire heard in the area, another Reuters reporter said.

Earlier, the Pentagon said US troops came under artillery fire from Turkish positions on Friday but none of its soldiers were wounded near Syria's Kobani, some 60 km west of the main area of conflict.

Turkey's Defence Ministry said its forces did not open fire on the US base and took all precautions to prevent any harm to it while it was responding to fire from a nearby area by the Kurdish YPG militia, which Ankara regards as a terrorist group.

"US and coalition soldiers were definitely not hit. Indeed the necessary coordination is being carried out by our headquarters and the Americans," Turkish Defence Minister Hulusi Akar was quoted as saying on Saturday.

Akar was speaking as he and military commanders visited operation headquarters along the border, state-owned Anadolu news agency reported.

Seventy four Kurdish-led fighters, 49 Turkey-backed Syrian rebels and 20 civilians have been killed in the fighting, according to war monitor, the Syrian Observatory for Human Rights.

The United Nations said 100,000 people have fled their homes.

Turkey's Defence Ministry said 415 YPG militants had been "neutralised" since the operation began, a term that commonly means killed. 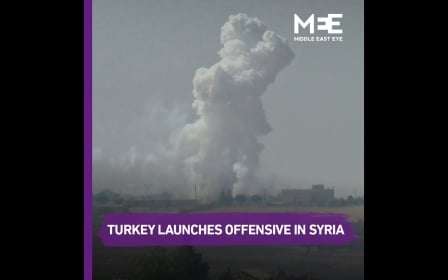 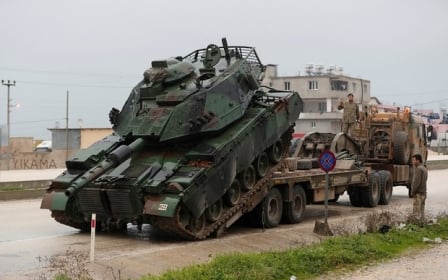