Signing attended by German chancellor, who is in the Gulf to find alternative energy sources to Russian supplies 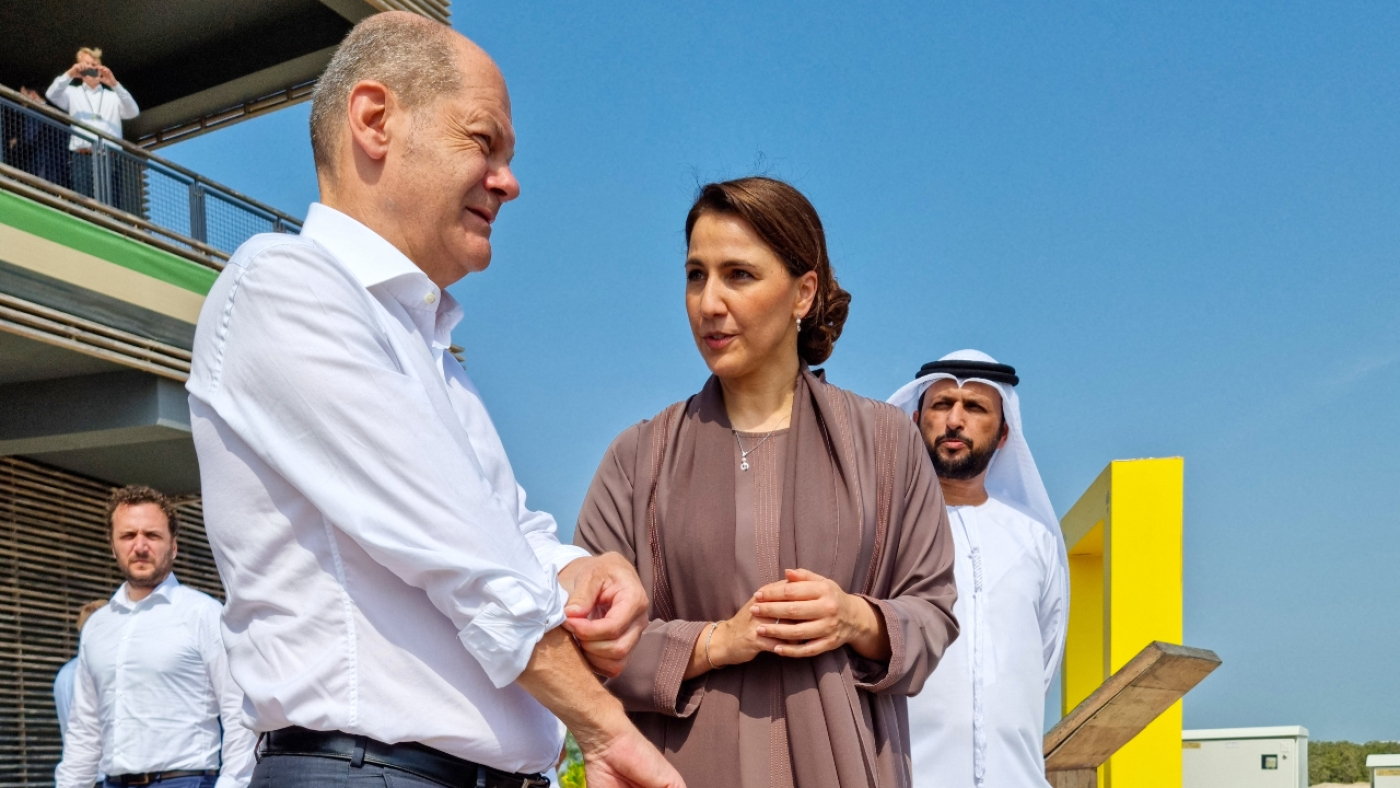 The visit by Chancellor Olaf Scholz, left, to the UAE included a tour of an environmental project at a mangrove park with the Emirati climate change minister, Mariam Almheiri (AFP)
By
MEE staff

Scholz was on a visit to the UAE as part of a Gulf tour that also includes stops in Saudi Arabia and Qatar.

The president met with Emirati counterpart Sheikh Mohammed bin Zayed Al Nahyan, who said on Twitter afterwards that they had discussed "further opportunities for cooperation in areas including energy security, emissions reduction and climate action".

As part of the deal, the UAE will provide "an LNG cargo for delivery in late 2022, to be used in the commissioning of Germany's floating LNG import terminal at Brunsbuettel", a North Sea port, the WAM report added.

UAE state oil company ADNOC completed its first ever direct diesel delivery to Germany this month and will "supply up to 250,000 tonnes of diesel per month in 2023", it said.

"ADNOC has reserved a number of further LNG cargoes exclusively for German customers in 2023," it said.

Sunday was the second and final day of Scholz's Gulf tour, which he hoped would seal new energy deals to replace Russian supplies and mitigate the energy crisis resulting from Moscow's invasion of Ukraine.

Scholz's stop in the UAE included a tour of an environmental project at a mangrove park with the Emirati climate change minister, Mariam Almheiri.

The UAE and Saudi Arabia have been leading critics of what they describe as "unrealistic" transition models they say have contributed to the current energy crunch. Scholz told reporters in Abu Dhabi that his country had "made progress on a whole series of projects here in terms of the production and purchase of diesel and gas", while adding it was determined to avoid energy dependence on Russia in the future.

"The fact that we are dependent on one supplier and also dependent on its decisions will certainly not happen to us again," he said.

After meeting on Saturday with Saudi Arabia's crown prince, Scholz said that he wanted to deepen the energy partnership between the two countries. Scholz said he also addressed issues involving human and civil rights in his talks with the crown prince.

A US intelligence report has concluded that Mohammed bin Salman was responsible for ordering the murder of the the Saudi journalist Jamal Khashoggi, who disappeared after entering the Saudi embassy in Istanbul in 2018.

Khashoggi, who worked as a columnist for the Washington Post and Middle East Eye, was often critical of the Saudi monarchy and the crown prince. His body was believed to have been dismembered with a bone saw, but his remains were never found, and the crown prince has denied the accusations.

Prominent German politicians from an array of parties, in an article on Saturday in Der Spiegel, had called on Scholz to address the matters.

"You can assume that nothing was left unsaid," the president said when asked if he had also discussed the murder of Khashoggi.