Iranian president stresses need for guarantee that US won't leave deal in the future, and criticises IAEA inspections of Iranian nuclear sites Iranian President Ebrahim Raisi attacked the United States' commitment to returning to the 2015 nuclear deal at the UN General Assembly on Wednesday, blaming the stalemate in talks on Washington's unilateral 2018 move to leave the deal.

Raisi spoke about efforts to return to the nuclear agreement at the tail end of his speech and stressed the need for a guarantee that the US would not leave the deal again - one of the major sticking points in the negotiations.

"Our wish is only one thing: commitment, observance of commitments," Raisi said.

"Can we truly trust without guarantees and assurances that [the US] will this time live up to their commitment?" UN General Assembly: Which Middle East leaders are speaking, and when?
Read More »

The Iranian president said the issue of Iran seeking guarantees was based "on lived experience", referring to the previous US withdrawal from the nuclear deal - in which Tehran curbed its nuclear programme in exchange for the lifting of international sanctions.

In 2018, former US President Donald Trump walked away from the deal, known officially as the Joint Comprehensive Plan of Action (JCPOA). Subsequently, after leaving the accord, the Trump administration reimposed those sanctions and more under what it called its "maximum pressure" policy.

Iran had continued to keep its commitments to the nuclear deal, but a year later began to reduce those commitments after continued US pressure.

When Biden came into office last year, his administration entered indirect negotiations to return to the agreement. After a year-and-a-half of indirect talks with Iran, a final draft agreement has been created by the European Union, but several sticking points continue to exist.

Later in his speech on Wednesday, Raisi boasted Iran had been able to bear the brunt of the US sanctions and if no return to the nuclear agreement were finalised, "we will continue on that path steadfastly at the same time".

US President Joe Biden spoke later in the day, issuing only a passing remark regarding Washington's efforts on the nuclear negotiations. His 30-minute speech was primarily focused on Russia's war in Ukraine.

"While the United States is prepared for a mutual return to the Joint Comprehensive Plan of Action if Iran steps up to its obligations, the United States is clear we will not allow Iran to acquire a nuclear weapon," Biden said, in a comment more generally on the state of nuclear proliferation around the world.

"I continue to believe that diplomacy is the best way to achieve this outcome."

Iran has repeatedly stated it is not seeking to create a nuclear weapon and its programme is solely for peaceful, civilian purposes. Raisi emphasised this point by raising the fact that Iran's Supreme Leader Ayatollah Ali Khamenei issued a fatwa, an Islamic ruling, prohibiting the production or use of any weapons of mass destruction. In addition to Iran seeking a guarantee that the US would stick to the deal, Tehran has also called for an end to an inquiry by the International Atomic Energy Agency (IAEA) into three Iranian nuclear sites revolving around unexplained nuclear particles.

"In a framework where only two percent of the nuclear activities of the world are taking place in Iran, Iran has been the subject of 35 percent of nuclear inspections," Raisi said at the UN lectern on Wednesday.

On Tuesday, Raisi held a face-to-face talk with French President Emmanuel Macron, the first such meeting with a western leader since Raisi was elected last year.

France on Monday said there would not be a better offer for Iran to revive the 2015 nuclear deal.

"The ball is now in Iran's court, which has to say whether it accepts the conditions that have been set formally by the Americans and Europeans," Macron told reporters after meeting Raisi.

He added that western countries would not pressure the IAEA to close its probes.

US National Security Adviser Jake Sullivan said on Tuesday that he did not expect a breakthrough during this week's meetings at the UN. 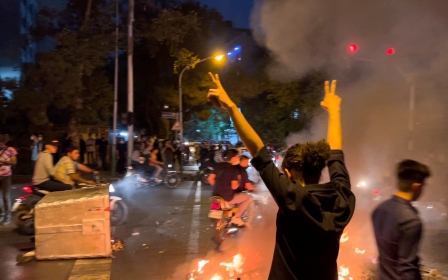