In a briefing with a pro-Israel group, senior Biden aide repeated Israeli quote which is seen as a racist trope against Arabs and Palestinians Palestinians protest against Israeli forces near the West Bank village of Naqura, 4 September 2019 (AFP/File photo)
By
Ali Harb
in
Washington

Joe Biden will shield Israel from criticism at the United Nations if elected president, a senior adviser to the vice president's campaign has said, stressing that US aid to Israel will be guaranteed no matter what the Israeli government does.

In a briefing with the Democratic Majority for Israel (DMFI) on Monday, top Biden aide Tony Blinken talked up the former vice president's pro-Israel credentials restating the campaign's commitment to the partnership with Israel.

"He would not tie military assistance to Israel to any political decisions that it makes. Period. Full stop. He said it; he's committed to it. And that would be the policy of the Biden administration," said Blinken, who served as deputy national security adviser under Barack Obama.

The remarks reiterated Biden's position from last year when he rejected then-fellow candidate Bernie Sanders' proposal to leverage aid to Israel in order to pressure it to end its abuses against Palestinians.

But the assertive comment comes at a time when the Israeli government is planning to annex large parts of the occupied Palestinian territories in the West Bank - a move widely rejected by the international community and Biden himself.

Vowing to 'show up' for Israel

DMFI, an AIPAC-linked Democratic organisation that endorsed Biden, ran attack ads against Sanders in the early primary season. Blinken told the group on Monday that Biden will push back against the Boycott, Divestment and Sanctions (BDS) movement as well as efforts to denounce Israel for its violations of international law at the United Nations.

"Will we get it to stop? No, I don't think that's possible," he said of the UN criticism of Israel. "Will we stand up forcefully against it and try to prevent it, defuse it and defeat it? Absolutely."

Donald Trump has pulled the United States out of the United Nations Human Rights Council and UN cultural agency UNESCO over what his administration called "bias against Israel".

Blinken said Biden would re-engage with UN organisations if elected president to make it known that Washington does not approve of calling out Israel over its violations of international law. "The wholesale retreat of the United States under the Trump administration from all of these institutions and arrangements has put us in a much weaker position to stand up for and defend Israel when it's under attack," he said. "If you're not there, you can't do it."

Late in 2016, the Obama-Biden administration refused to use Washington's veto power to block a UN Security Council resolution denouncing Israeli settlements in the West Bank and East Jerusalem as a "flagrant violation" under international law. Still, Blinken vowed that Biden would "show up" to defend Israel at the international stage.

"The only way to secure Israel's future as a democratic and Jewish state is through two states," Blinken said.

"And it's also the only way to meet the legitimate aspirations of the Palestinian people. Any unilateral action by either side that makes what is already a very difficult prospect even more difficult is something he opposes. And annexation is exactly that kind of unilateral action."

Blinken went on to warn Palestinians against "unilateral actions", saying that they must recognise Israel as a Jewish State and stop "incitement".

The Palestinian Liberation Organisation said it accepted Israel's existence in 1988, but the Palestinian Authority has refused to recognise it as a Jewish state in order to protect the right of return for refugees and the civil rights of Palestinian citizens of Israel.

Ironically, the quote cited by Blinken has been denounced as a form of racist incitement against Palestinians. 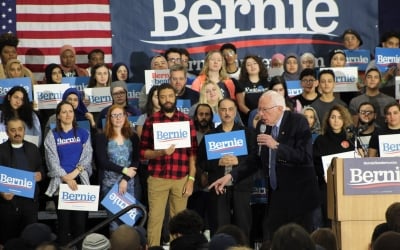 Abed Ayoub, the legal director of the American-Arab Anti-Discrimination Committee (ADC), rebuked the Biden campaign on Monday over using the expression.

"Biden's campaign is so beholden to AIPAC that they have adopted racist tropes to define Palestinians, the same tropes used to justify apartheid policies," Ayoub told MEE.

Ayoub said Blinken's remarks reflect Biden's stance on the conflict, which makes him "no different than Trump" in failing to uphold the human rights of Palestinians.

"This is unfortunate. This is why he's going to have a hard time winning the support of Arabs and Muslims this coming November, and that should worry his campaign, especially in states where we have a large concentration," Ayoub said.