US, France and UK launch 'precision strikes' on Syria French jet takes off as part of joint air strike operation on Syria by British, French and US forces (Reuters)
By
MEE and agencies

Trump stressed that the military strikes were ongoing and that France and the United Kingdom were joining in the action.

"A short time ago, I ordered the United States armed forces to launch precision strikes on targets associated with the chemical weapons capabilities of Syrian dictator Bashar al-Assad," Trump said in a televised address from the White House.

Trump had spent the last few days huddling with his senior military advisers and speaking to allies France and Britain in deciding what action to take after a deadly suspected gas attack in Douma, the largest town in the former rebel-held bastion of Eastern Ghouta.

Russia strongly condemned the attack, with one Russian official comparing the US president to Adolf Hitler. "Trump is not just a criminal for the whole world, he is Adolf Hitler number two," Alexander Sherin, deputy chairman of the Russia's State Duma Defense Committee, was quoted as saying by Sputnik.

He called the US-led strikes an "act of aggression" and a "turning point".

"This is a declaration of war against a sovereign state, towards which a nuclear power is fulfilling its obligations of help and security," Sherin said.

Anatoly Antonov, Russia's ambassador to Washington, said the US and its allies may face "consequences" for the strikes. "Again, we are being threatened. We warned that such actions will not be left without consequences," Antonov said in a statement. "All responsibility for them rests with Washington, London and Paris."

UK Prime Minister Theresa May said the targeted strikes were not aimed at escalating tensions in the region and that the sites were chosen to prevent civilian casualties.

"This evening I have authorised British armed forces to conduct coordinated and targeted strikes to degrade the Syrian regime's chemical weapons capability and deter their use," she said in a statement.

May said "a significant body of information including intelligence" pointed to Syrian government responsibility for the suspected chemical attack last Saturday. "There is no practicable alternative to the use of force to degrade and deter the use of chemical weapons by the Syrian regime," she said.

French President Emmanuel Macron said: "We cannot tolerate the recurring use of chemical weapons, which is an immediate danger for the Syrian people and our collective security," in a statement from the Elysee presidential office.

US Secretary of Defense James Mattis said the attack was a "one-time shot" to deter Assad from using chemical weapons. He added that US forces were "going to great length to avoid civilian and foreign casualties".

Chairman of the Joint Chiefs of Staff Joseph Dunford, who spoke alongside Mattis at a Pentagon news briefing, said the US "did not coordinate the strikes" with Russia. "We did not do any coordination with Russia on these strikes, neither did we pre-notify them," he said.

US naval assets were involved in the operation, including the Arleigh Burke-class guided missile destroyer USS Donald Cook, which is in the region, while May had authorised the use of submarines as a show of support, a US official told Fox News earlier.

The US was using Tomahawk cruise missiles in its strikes and taking aim at multiple targets in the country, a US official told Reuters, without disclosing whether US aircraft were also involved in strikes.

The Pentagon said they doubled the number of Tomahawks from a strike last April on Syria's Shayrat airbase, when 59 of the missiles were fired.

A separate official told AFP that multiple types of weapons were used in the operation. 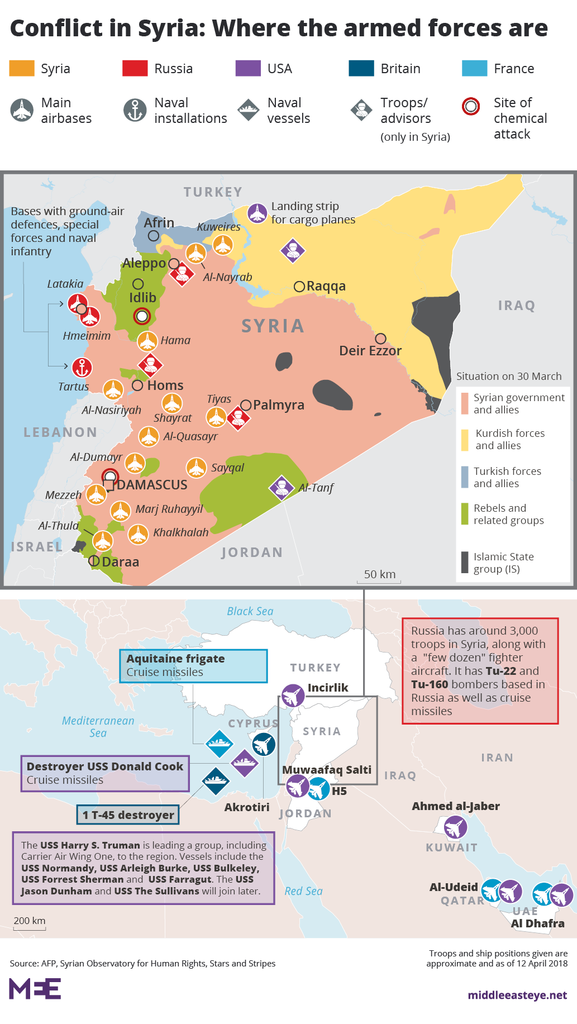 The Syrian Observatory for Human Rights said a scientific research centre and military bases in Damascus were struck in the attack. The Syrian army's Republican Guard and 4th Division, elite units of the Syrian military, were also targeted.

Syrian air defences shot down 13 missiles, Syrian state TV said. It said the missiles were intercepted in the Kiswah area south of Damascus.

The Observatory said a total of three scientific research centres had been hit in the attacks - two in Damascus and one in the Homs area - in addition to military bases in Damascus.

It added that all the bases and facilities struck in the attack had been evacuated by the Syrian government earlier in the week.

The Syrian government and its allies had absorbed a US-led attack as the targeted sites were evacuated days ago thanks to a warning from Russia, a senior official in a regional alliance that backs Damascus said.

"We had an early warning of the strike from the Russians ... and all military bases were evacuated a few days ago," the official told Reuters. About 30 missiles were fired in the attack, and a third of them were shot down, the official said.

Explosions were heard in Damascus as Trump spoke, Reuters reported.

Despite the strike, Trump committed to his pledge to pull US troops from Syria. He said suggested that US partners - Saudi Arabia, the United Arab Emirates, Qatar and Egypt - would fill the void left by the Americans to counter the resurgence of the Islamic State group.

"America does not seek an indefinite presence in Syria under any circumstances," Trump said.

The Middle East is a "troubled place," but the US will try to "make it better," he added.

"It is imperative that when an American president speaks and warns ruthless dictators not to use chemical weapons against innocent children, those statements actually mean something," Graham tweeted.

McCain applauded Trump and thanked the UK and France for the strike.

Syria war: A battleground for regional and global supremacy that will not end
Ranj Alaaldin
Read More »

Nancy Pelosi, leader of Democrats in the US Congress, appeared to endorse the American military response to the alleged chemical attack but called in a statement for a "clear, comprehensive Syria strategy".

She added: "President Trump must also hold Putin accountable for his enabling of the Assad regime’s atrocities against the Syrian people."

Independent Senator Bernie Sanders, who ran for president as a Democrat in 2016, called the strikes illegal in a Twitter post.

"It is Congress, not the president, which has the constitutional responsibility for making war," he wrote. "The international community must uphold the prohibition against the use of chemical weapons, but it is unclear how Trump's illegal and unauthorized strikes on Syria achieve that goal." Syria War
Trump and May: We need a 'joint response' to Syria