The Louvre Abu Dhabi has removed a controversial map that made Qatar disappear and appeared to annex an Omani peninsula to the United Arab Emirates.

The flagship museum, which opened in November, sparked controversy after images of the map of the southern Gulf shown in the museum omitted Qatar entirely, and seemed to have removed the border demarcation between the UAE and the Omani governorate of Musandam.

Here is the map from an exhibit in the Louvre Abu Dhabi that omits the Qatari pensinsula from the Lower Gulf. The label alongside it reads:

Simon Henderson, director of the Gulf and Energy Policy Program at The Washington Institute wrote: “In the children's section of Abu Dhabi's new flagship Louvre Museum, a map of the southern Gulf completely omits the Qatari peninsula - a geographical deletion that is probably incompatible with France's agreement to let Abu Dhabi use the Louvre's name.”

The museum announced on Monday that the map had been replaced. In a statement, it said the mistake was due to “negligence” and that the error had been corrected.

The opening of the museum came a decade after France and the UAE agreed to a 30-year partnership initially reported to be worth $1.1bn, including nearly half a billion dollars for the rights to the Louvre brand alone.

Musandam is a peninsula that juts into the straits of Hormuz and is an enclave separated from the rest of Oman by Emirati territory.

The map, which was in the children’s section, was one of many which are intended to provide context for the art exhibitions on show.

Omani activists accused Abu Dhabi’s Louvre of deliberately attempting to distort the geography of the region.

Translation: The Louvre Abu Dhabi is lying and deliberately spreading misinformation when it drew a map and entered the whole of the governorate of Musandam into UAE territory!!! And removed Qatar from the map and entered parts of Saudi into the UAE's territory.

Translation: For the second time... Previously a map of Oman was published on the Mohamed bin Zayed award for best GCC teacher just months ago showing Musandam as part of the UAE, which was removed after twitter users asked for clarification

Throughout history museums were a source of reference. People would visit to acquire knowledge and learn about world cultures through the exploration of objects on display. Although the notion of museums is a new one to Abu Dhabi, surely the @MuseeLouvre is not okay with this? https://t.co/k5ikOmSpsd

Saudi Arabia, Bahrain, the UAE and Egypt severed diplomatic relations with Qatar in early June, halting all air, sea and land links to the emirate.

The Gulf countries and Egypt expelled Qatar from the coalition fighting the war in Yemen, accusing it of supporting terrorism. 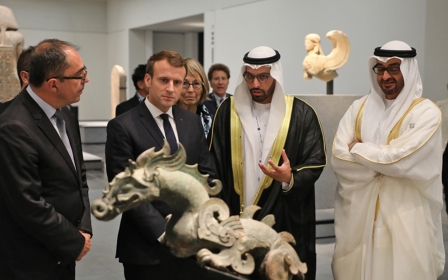