From 'Paki bashing' to citizenship-stripping: Shamima Begum case an issue of identity for British-Bangladeshis

Walking through the hustle and bustle of Whitechapel's street market in east London, there is one topic of conversation.

Shamima Begum: The local school girl, now 19, who left Britain to join Islamic State (IS) in Syria at the age of 15.

Whether in Bengali or English, locals here, many of whom share Begum's Bangladeshi roots, are discussing whether the teenager should be allowed back into the UK.

One detail of the Begum case that has sparked particular concern and curiosity among Britain's Bangladeshi community has been Home Secretary Sajid Javid's decision to revoke Begum's citizenship.

Government sources told the BBC that Javid used Begum's eligibility for Bangladeshi citizenship, to which she is entitled through her Bangladeshi parents, as grounds for taking away her British citizenship.

Legal experts say the move has highlighted how millions of British citizens, among them many British-Bangladeshis, eligible for dual nationality, are at risk of having their citizenship revoked.

And while Bangladesh has insisted that Begum is not a citizen, many British-Bangladeshis say that the fact that the issue of citizenship has been raised at all has made them begin to question their own place in British society.

Poppy Begum, a lifelong resident of Tower Hamlets and a mother of three from Bangladesh, questioned if there was a double standard at play.

Before dipping into the array of hijabs piled up on a market stall, Begum hands a bag of shopping to her 21-year-old daughter Shireen, and asks: "Would they do this to a white person?"

Begum's family came to the UK in the 1970s, after the outbreak of the Bangladeshi war of Independence in 1971.

Bangladesh's nationality laws state that members of the Bangladeshi diaspora are automatically eligible for citizenship from the moment they are born. This eligibility remains intact until the age of 21, by which time they have claim it to keep it.

"It scares me a lot because if they can do it to her, they can do this to anyone, like my children, who can get Bangladeshi citizenship," said Begum.

"It's not right that they took away her citizenship. And just because her parents are Bangladeshi, doesn't mean she is."

Home to Britain's largest Bengali-speaking community, Tower Hamlets is an inner-city London area that suffers from high levels of deprivation.

When Bangladeshi migrants came to Britain, they did so with the intention of staying in Britain temporarily before then heading back. That changed, however, when the war of independence broke out in 1971, leading many to put down permanent roots.

But despite Tower Hamlet's history of immigration, racism towards migrant communities has forced many to question their place in British society, with many fearing their citizenship could be taken away from them at any time.

"Our parents would always tell us that they can take away our citizenship at any time if we do anything wrong," Rabina Uddin, a school teacher who grew up in the Tower Hamlets area, recalled.

"We would laugh it off, but I guess they were right. The government is stalling the situation with Shamima Begum and now trying to use her case to teach others a lesson.

"This was a long time coming. We are a minority in this country. What did you expect?"

Ridwan, however, who is an aid worker, questioned whether Begum's citizenship revocation was "an exception to the rule".

"I was speaking about it with some friends on Whatsapp, and for a second we thought damn, that could be us too," said Ridwan, who declined to give his surname.

"A lot of us hope that they only exercise this power on extreme cases and not the everyday person, but it does make you question whether our British citizenship is conditional." Sitting in a cafe near the East London Mosque, Azad Ali, a veteran anti-racist campaigner who works for CAGE, reflects on how the area has changed over the years.

Having lived in Tower Hamlets his whole life and been involved in community projects across the borough, Ali recalls the days when the feared far-right National Front group would run amok in the area.

"I used to remember running back from the sweet shop, and mapping out which road to take to escape anyone trying to beat me up,"  Ali chuckled, as he drank a cup of Karak Chai.

"Thugs from the National Front would call it 'Paki bashing' but now it's completely changed."

He adds: "The last generation has had it much easier because it was in your face, not as implicit as it is today.

"But thanks to Prevent and what Sajid Javid did to Shamima Begum, people are now waking up and seeing that racism can be state-led."

It's a sentiment that is echoed by Taqwa, a 17-year-old who aspires to become a lawyer.

She remembers Shamima Begum as a fellow student, albeit two years above her, at Bethnal Green Academy.

Standing at the edge of Whitechapel market, Taqwa explains why she finds the current climate for Muslims "concerning".

"Taking away her citizenship is iffy. They are basically taking our rights," said Taqwa, who refused to give her surname.

"It's like they're building a wall against us as Muslims, simply because we don't have British blood."

Some names were changed at the request of the interviewees. 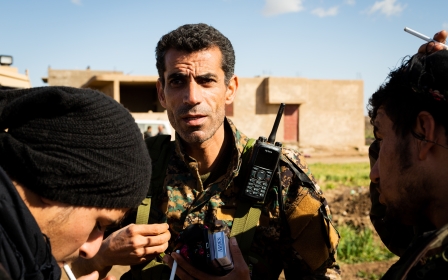 Syria War
'Did you bring cigarettes?' Meet the fighters on the last frontline against IS