The Arab boat: It’s an Arab-Palestinian Nakba, and we are all refugees

Ramzy Baroud
That most Arabs are now equally sharing the burden of war, revolution, destitution and exile is, despite everything, a source of optimism 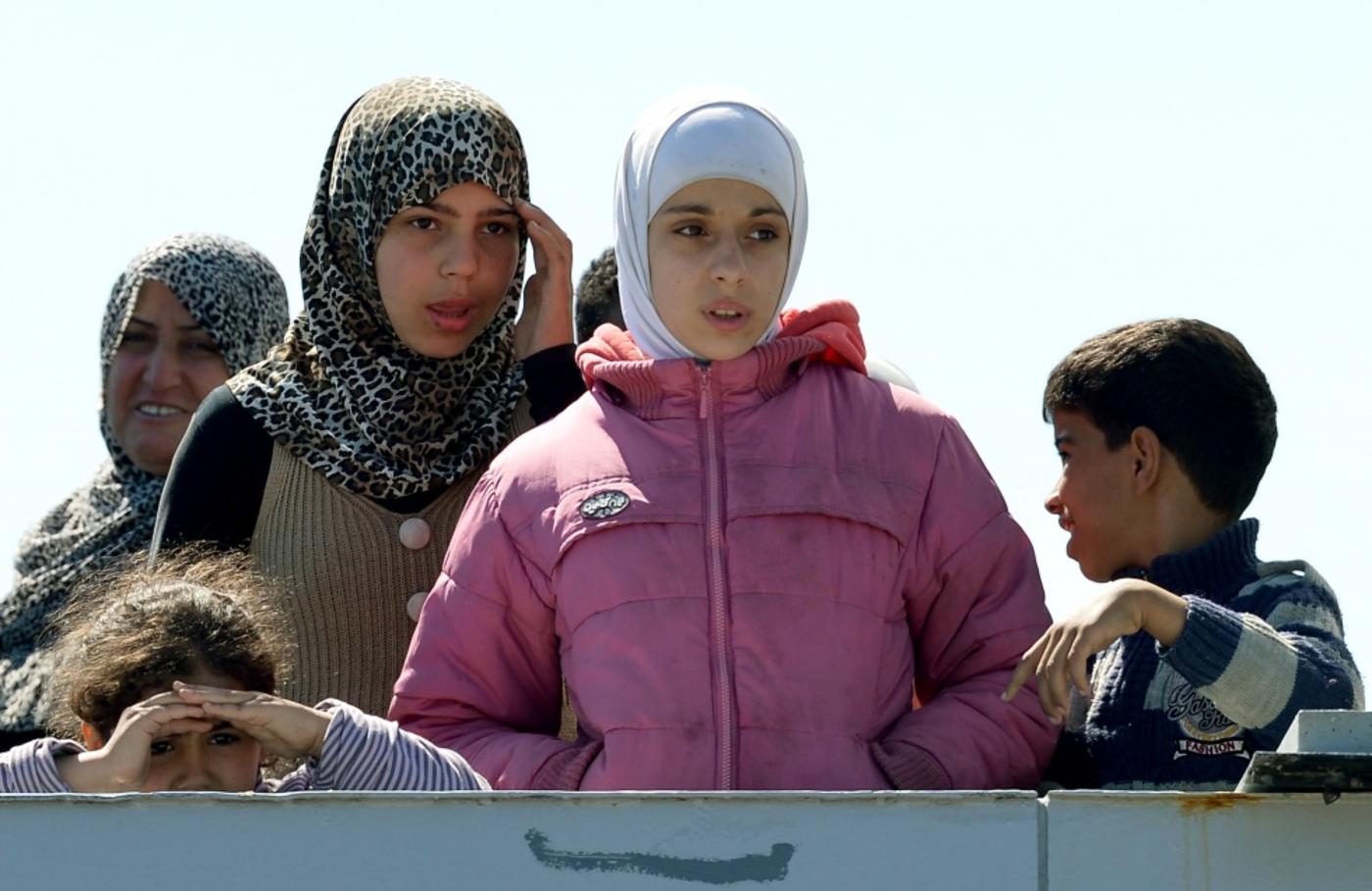 In a western capital far away from Gaza and Cairo, I recently shared a pot of tea with an “Egyptian refugee”.

The term is familiar to me, but never have I encountered an Egyptian who refers to himself as such. He stated it as a matter of fact by saying: “As an Egyptian refugee ..” and carried on to talk about the political turmoil in his country.

It made me shudder as I tried to conjure up a possible estimation of Arabs who have been made refugees in recent years. But where does one start the estimation if we are to set aside the Palestinian Nakba in 1948? Or forget the successive waves of ethnic cleansing of the Palestinians that followed, and disregard the various exoduses of Lebanese civilians as a result of Israeli invasions and civil war?

Iraq can be the start - the country that served as a foundation of everything Arab. Their culture, history and civilisation, which extends to the very beginning of human civilisation, ushered in the new Arab exodus.

The American promise to bomb it “back to the stone age” was worse than expected. Millions of Iraqis became refugees after the US-led war, a situation that was exacerbated in the mid-2000s with the invasion-provoked civil war.

Last year alone over two million Iraqis were displaced, most of them internally as a result of the so-called Islamic State’s violent takeover of numerous territories in northern and western Iraq.

A recent report by the Geneva-based Internal Displacement Monitoring Centre (IDMC) finally placed the crises in Syria, Iraq, Libya, etc, in a larger context, accentuating the collective Arab tragedy. “These are the worst figures for forced displacement in a generation, signaling our complete failure to protect innocent civilians,” according to Jan Egeland, head of the Norwegian Refugee Council, the organization behind IDMC.

War and conflicts have resulted in the displacement of 38 million people, of whom 11 million were displaced last year alone. This number is constantly fortified by new refugees, while the total number of people who flee their homes every single day averages 30,000; a third of those are Arabs who flee their own countries.

Yes, 10,000 Arabs are made refugees every day, according to IDMC. Many of them are internally displaced people (IDPs), others are refugees in other countries, and thousands take their chances by sailing in small boats across the Mediterranean. Thousands die trying.

“I am a Syrian refugee from the Palestinian al-Yarmouk camp in Damascus,” wrote Ali Sandeed in the British Guardian newspaper. “When I was small, my grandmother used to tell us how she felt when she was forced to flee to Syria from her home in Palestine in 1948, and how she hoped that her children and grandchildren would never have to experience what it feels like to be a refugee. But we did. I was born a Palestinian refugee, and almost three years ago I became a refugee once more, when my family and I had to flee the Syrian war to Lebanon.”

“'I thought the boat was my only chance,” was the title of the article in which Sandeed described his journey to Europe via boat.

Many of Yarmouk’s refugees are refugees or descendants of Palestinian refugees who once lived in northern Palestine - in Haifa, Akka and Saffad. Reading his testimony immediately summoned the chaotic scenes as the refugees fled the Zionist invasion of Haifa in 1948.

Thanks to Palestinian and Israel’s new historians like Ilan Pappe, we know so much about what has taken place when the tens of thousands of people attempted to escape for their lives using small fishing boats:

“Men stepped on their friends and women on their own children. The boats in the port were soon filled with living cargo. The overcrowding in them was horrible. Many turned over and sank with all their passengers.” (Pappe, The Ethnic Cleansing of Palestine, p. 96)

The brutality and sense of despair embodied in that scene is repeated every single day in various manifestations throughout Arab countries: Iraq, Syria, Libya, Yemen and so on. If the destination of these refugees were illustrations via small arrows, the arrows would be pointing in many different directions. They would overlap and they would, at times, oppose one another: innocent people from all walks of life, sects and religions dashing around in complete panic along with their children and carrying whatever they could salvage.

The Palestinian Nakba (the catastrophe of war, displacement and dispossession of 1948) has now become the Arab Nakba. Palestinian refugees know too well what their Arab brethren are going through: the massacres, the unredeemable loss, the despair, and the sinking boats.

One recalls a question that persisted in the minds of many when the so-called Arab Spring first began in early 2011: “Are Arab revolutions good for Palestine?”

It was impossible to answer. Not enough variables were in place for any intelligent assessment, or an educated guess even. The assumption was: if Arab revolutions culminate in truly democratic outcomes, then, naturally, it would be good for the Palestinians. This assumption followed the simple logic that, historically, Arab masses - particularly in poorer Arab countries - perceived Palestine as the central and most common struggle that unified Arab identity and nationalism for generations.

But not only did democracy not prevail (with the Tunisian exception) but many millions of Arabs joined millions of Palestinians in their perpetual exile.

What does that mean?

My Egyptian friend, who declared himself a “refugee,” told me: “I am optimistic.”

“I am too,” I replied, with neither one of us feeling a bit surprised by the seemingly curious statements.

The source of optimism is twofold. Firstly, Arabs have finally broken the fear barrier, a prerequisite essential for any popular movement that opts for fundamental change. Secondly, now most Arabs are equally sharing the burden of war, revolution, destitution and exile.

That is far from being a “good thing,” but it certainly accentuates the element of urgency in the collective Arab fate.

“We are in this together,” I told my Egyptian friend. Indeed, it is as if all Arabs are riding on a single, overcrowded dinghy and we must all make it to the other side safely. Sinking in not an option.

Photo: Rescued migrant children wait to disembark from the Italian Navy vessel Bettica as they arrive in the Sicilian harbour of Augusta on April 22, 2015. (AFP Alberto Pizzoli 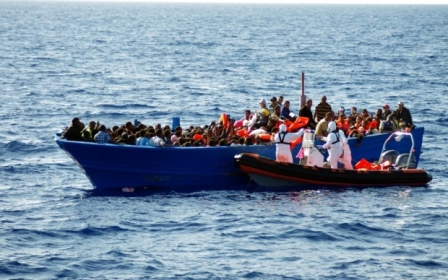 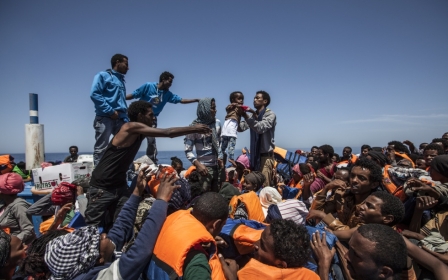