One question left in Gaza: Death by massacre or lack of electricity?

Haidar Eid
With intensified electricity cuts, its biggest aid donor under pressure and many saying another Israeli offensive is imminent, the siege in Gaza has never been worse 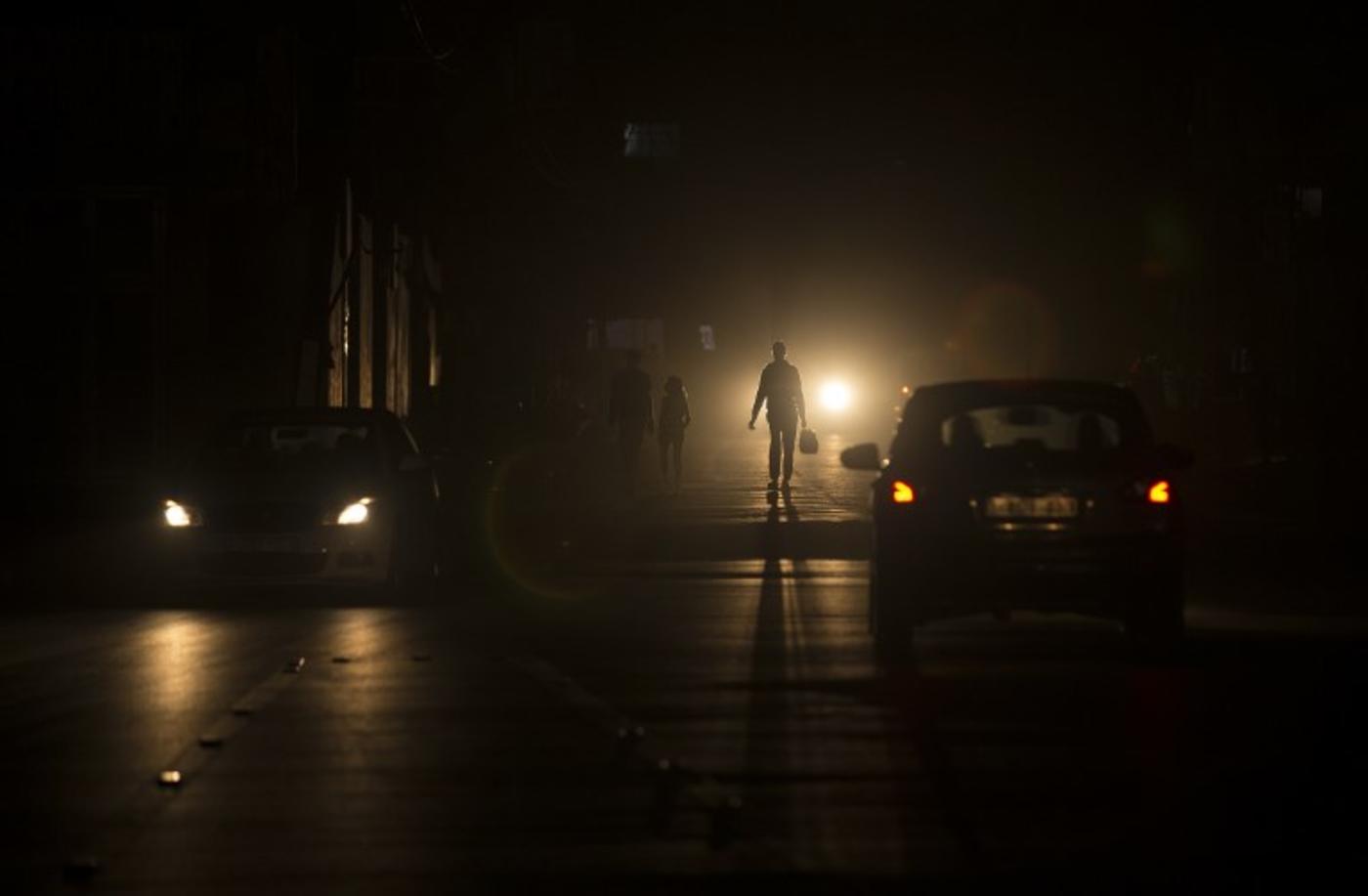 Like everywhere else in the world, electricity in Gaza gives us access to clean water and medical care. With it, we can refrigerate our food in the hot summer and find warmth in the cold winter – and connect with the outside world and one another.

It may sound very benign – electricity has been cut to Gaza – but it is a death sentence for the almost 2 million Gazans like me living in the Israeli-imposed blockaded strip.

Are there citizens in any other country in the world who debate what the better way is for them to die?

In fact, cutting electricity to Gaza is a de facto declaration of war against the civilian population and an illegal form of collective punishment.

For those who are not familiar, the debate amongst Gazans nowadays is whether a direct military assault - that is the use of bombs and guns carried out by apartheid Israel - is a better way to die than through an incremental genocide, the intensifying blockade that has been imposed on our tiny strip for 10 years.

Just think about that: are there citizens in any other country in the world who debate what the better way is for them to die?

Gideon Levy, the courageous Israeli journalist, has an answer: “What’s at stake now is the danger of another massacre in the Gaza Strip. Controlled, measured, not too massive, but nonetheless a massacre. When Israeli officers, politicians and commentators talk about 'the next round,' they’re talking about the next massacre.”

The PA's means and ends

Apartheid Israel has maintained a deadly medieval blockade on Gaza since 2007, when the Islamic Resistance Movement, Hamas, seized control of the tiny strip after legitimately winning the 2006 Legislative Council elections.

This blockade was imposed because the democratic choice of the Palestinians was rejected outright by almost all major powers in the region, including the Fatah-led Palestinian Authority.

The occupants of Gaza are not just the leaders of Hamas but ordinary Palestinians too. We are the people who are enduring these salary and electricity cuts

The siege has recently become even worse because in April, Mahmoud Abbas, the president of the Palestinian Authority (PA), asked Israel to cut the electricity supply to the Gaza Strip to exert pressure on Hamas.

This followed his decision, also in April, to reduce the salaries of Gaza-based civil servants by 30 percent. It should be obvious to any reader that the occupants of Gaza are not just the leaders of Hamas but ordinary Palestinians too. We are the people who are enduring these salary and electricity cuts.

Even after a decade-long blockade, the situation here in Gaza is the worst it’s ever been following these latest changes. Hospitals, including Al-Shifa in Gaza City, have stopped doing operations, even in urgent cases.

As a result of the electricity cuts, 90 percent of the water supply is now undrinkable, increasing the risk of disease spread by dirty water.

The Palestinian Authority has reduced its monthly payments for electricity by 30 percent. And so Israel has allowed only 40 watts of power to be provided to the Strip in the full knowledge that 400 watts are needed for Gaza to meet the bare minimum survival needs.

It’s not like the world hasn’t been warned – repeatedly.

In mid-May, the International Committee of the Red Cross (ICRC) warned of the imminent collapse of the Gaza Strip saying, in a grim statement, that: “The scarcity of energy and the severe shortage of fuel in Gaza have damaged all aspects of life in the Strip…” The statement warned of a “looming crisis” in the public health and environment sectors as a result of the lack of energy.

And back in September 2015, the UN warned that Gaza could be "uninhabitable” by 2020. At the time, the report made it clear that Gaza's GDP had dropped by 15 percent in 2014, and unemployment had reached a record high of 44 percent with 72 percent of households being food insecure. The report concluded that Gaza’s de-development had been accelerated by the Israeli assault on Gaza in 2014.

What Israel fears about Hamas and the Qatar crisis
Read More »

This month, the UN acknowledged that without immediate action, the electricity crisis will bring about the “collapse of vital life-saving, health, water, sanitation and municipal services”. But strangely, the UN does not seem to have a grip on international law as the UN apportions blame for this crisis on the occupied Palestinians, not the Israeli occupier.

On the other hand, Richard Falk, the previous UN Special Rapporteur on the situation of human rights in the Palestinian Territories called a spade a spade, saying that he considered the siege on Gaza a “flagrant and massive violation of international humanitarian law” and a “crime against humanity”. Israeli writer Ilan Pappe also rightly calls it an “incremental genocide”.

What has become routine

The terror of it is that Gazans die every day, but death from illness as a result of dirty water or the lack of a life-saving operation, starvation due to the crops that fail to grow without sufficient irrigation, or babies dying because they cannot be kept warm in their first few days of life, these ways of dying do not make the news headlines.

Gazan deaths do not make the news headlines because they have been a daily routine for a decade. Only Israel benefits from this silence, and only Gazans pay the price for this silence.

Gideon Levy again: “To the Israelis, Gaza was and is a nest of terrorists…all its residents are murderous. They’re building terror tunnels instead of inaugurating high-tech plants. No, really, how come Hamas hasn’t developed Gaza? How dare they? How have they not set up an industry under siege, agriculture in prison and high-tech in a cage?”

It needs to be understood by the outside world that there is not much that we in Gaza can do against this medieval blockage except call on our supporters to intensify their call for boycott, divestment and sanctions (BDS) against Israel. Every single victory of the BDS movement supports Gaza’s survival.

The international community has utterly failed us. PERIOD. Words and empty rhetoric do not keep a Palestinian child crying out for milk alive, nor does it provide a terminally ill person with treatment.

We have just one window of hope, the same window that black South Africans saw before us – a sustained campaign of boycott, divestment and sanctions against apartheid Israel until it complies with international law.

Photo: Palestinians walk on a street at the Al-Shati refugee camp in Gaza City during a power outage on 11 June 2017 (AFP) 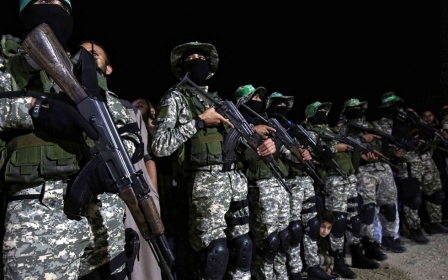 Gulf Tensions
What Israel fears about Hamas and the Qatar crisis 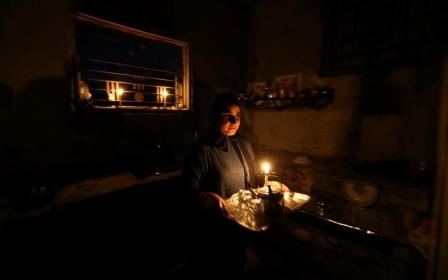