Sisi will win. After that he can only lose

Rania al-Malky
The Egyptian president is a captured beast caught in a barbed web of his own lies, with no real endgame in sight 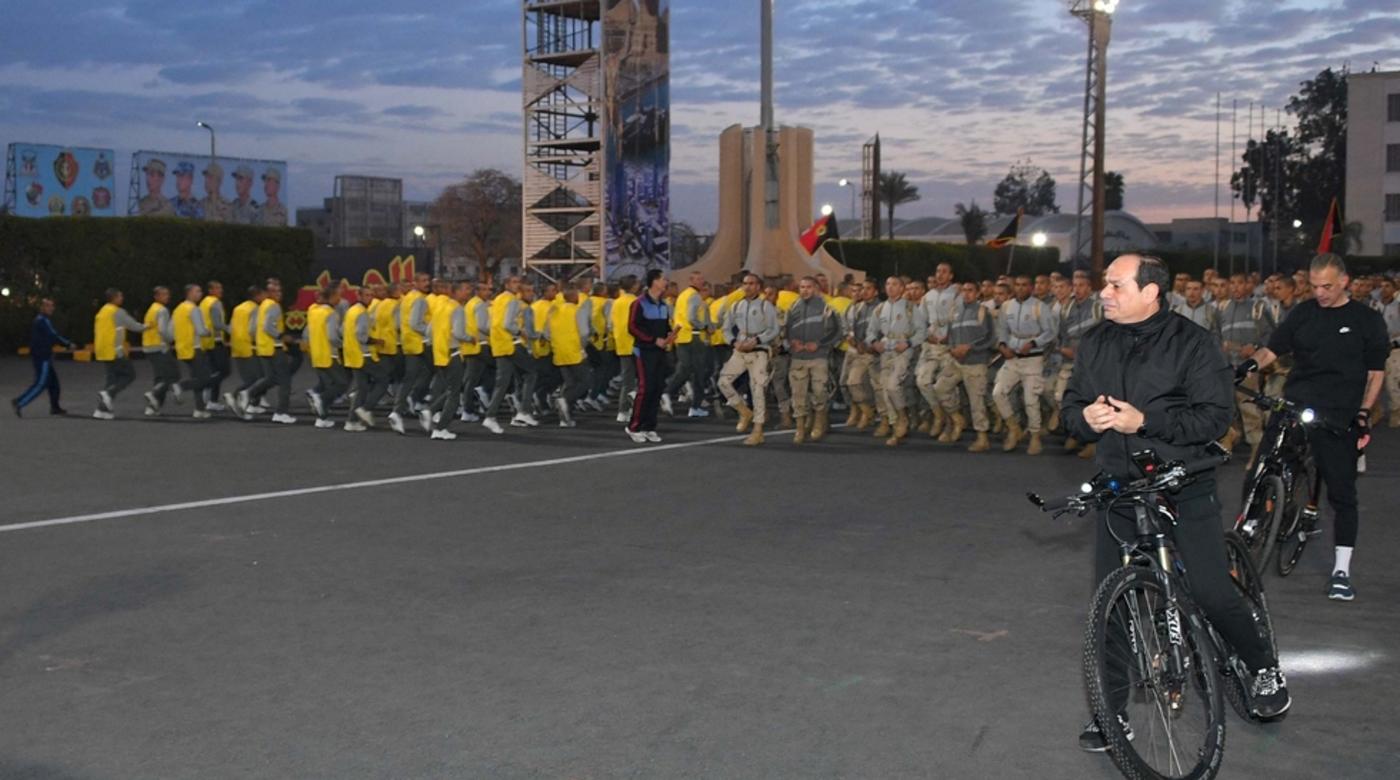 What exactly is the endgame for Egyptian President Abdel Fattah al-Sisi?

There is no doubt that Sisi will get a second term in this month's presidential election. His regime has either arrested or silenced all potential opponents, including the former army chief of staff, Sami Anan.

Anan's would-be running mate, Hisham Geneina, the former head of Egypt's corruption watchdog, has since been assaulted by thugs near his home and later arrested.

Anan's dramatic downfall came on the heels of an aborted attempt by another former military general, Ahmed Shafik, to join the race. Soon after, human rights lawyer and former presidential hopeful Khaled Ali withdrew his bid, for obvious reasons.

Cracking down on opposition

But still, the crackdown continues.

On 15 February, Abdel Moneim Aboul-Fotouh, a 2012 presidential candidate and Islamist politician, was arrested at his home. His Strong Egypt party has since suspended its operations, as less than a week earlier, police had arrested the deputy head of the party, Mohammed el-Qassas, who was charged with "joining and financing an outlawed group"

Since the 2012 election, Aboul Fotouh has become largely irrelevant in a political arena that has thoroughly emasculated all but Sisi's sycophants. He was clearly targeted after banned Qatari news outlet Al Jazeera aired an interview  where he was critical of Sisi and continued to call for an election boycott, earning him the laughable stock accusations of "disturbing the country's stability" and "inflating the current crises". 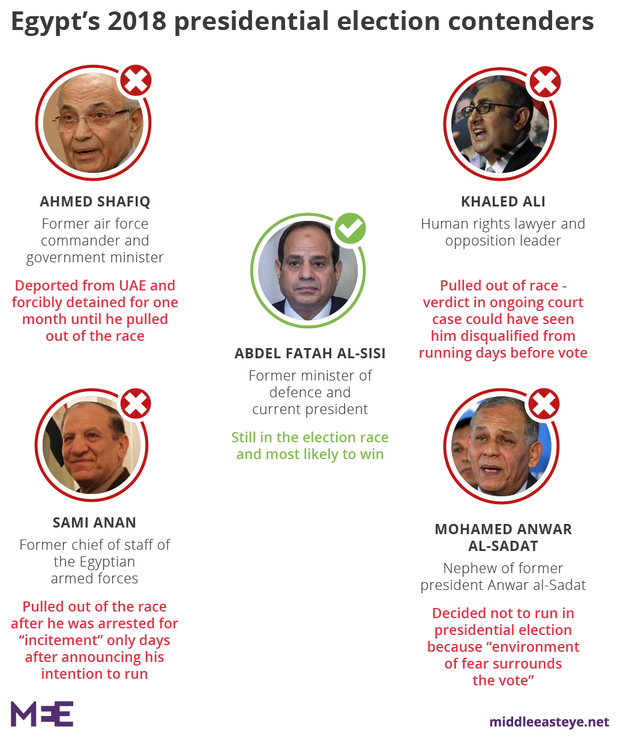 More recently, two leftist activists on the opposite side of the spectrum, 72-year-old Gamal Abdel Fattah and Hassan Hussein, 62, were snatched from their homes in early March and disappeared.

A week later, the State Security Prosecution officially remanded them in custody pending investigations into accusations of "joining a terrorist group, using social media to publicise the group's ideas, inciting acts of terrorism in writing and disseminating false news".

And on the media front, the BBC was thrust in the eye of a political storm after publishing a short documentary and report highlighting what it said were cases of enforced disappearances and torture carried out by security bodies under Sisi.

Perhaps the most insidious feature of this political charade is that it hinges on buying time; time Sisi will spend tarnishing dissenting media, smearing and arresting critics, and reinforcing the military establishment’s chokehold on power

The programme highlighted the case of Zubaida, a 23-year-old whose mother appeared in tears on the programme, referring to the "unspeakable" abuse of her daughter in custody and claiming that she had not seen her for a whole year. But her case was turned on its head when a pro-government network, ONTV, with help from the interior ministry, according to show host Amr Adib, aired an extremely dubious interview with Zubaida, refuting all her mother's claims.

The mother and her lawyer have since been arrested.

The State Information Service, which licenses members of the foreign press, has also called for an official boycott of the BBC until it issues an apology for its "violation of professional and ethical standards".

But the long arm of the "law" has also reached notorious regime cheerleaders on national television like Khairy Ramadan, who was briefly arrested then released on bail for “defaming the police” after airing a programme in which a police officer’s wife complained of tough living conditions.

Days before, the Public Prosecutor had ordered legal action be taken against media outlets that publish "false news and rumours" and Sisi doubled down with a statement that any insult by a media organisation against the army or police is defamation of the country and amounted to "treason", rather than freedom of opinion.

Public schools have since been ordered to add an army training song to their daily morning routine, as the military continues a Sinai campaign where schools and homes are indiscriminately demolished.

Regime at its weakest point

The act of arrest in itself and the exploding hegemony of state institutions is nothing new or unexpected. The real question is what does this escalation say about the regime's "state of mind"?

Clearly, Sisi's regime is bent on killing all avenues to a peaceful transfer of power. While his supporters will see the frenzied crackdown as reinforcing the "strong, inspired leader", a mythical role Sisi has falsely claimed, the truth beneath the surface is the exact opposite.

The Egyptian regime is at its weakest since the 2013 coup. Sisi's own popularity has waned drastically over the years, as his actions have spoken volumes on hot-button issues, such as the handover of Egypt's Red Sea islands, Tiran and Sanafir, to Saudi Arabia; the mishandling of the looming water crisis related to the building of the Grand Ethiopian Renaissance Dam; and the failure to stamp out an Islamic State-led insurgency in Sinai.

A New York Times investigation published on 3 February revealed that because of that failure, and for more than two years, "unmarked Israeli drones, helicopters and jets have carried out a covert air campaign, conducting more than 100 air strikes inside Egypt" with the approval of Sisi.

The news set off a firestorm of indefensible denials by the regime and its crocodile-teared apologists, but less than a month later, Sisi announced that he "scored a goal" with a $15bn natural gas deal with Israel.

According to Haaretz, Delek Drilling and its US partner, Noble Energy, signed the agreement to sell a total of 64 billion cubic metres of gas over a 10-year period to Egyptian company Dolphinus Holdings, which observers say could pave the way for wider cooperation and help turn Egypt into an export hub for Israeli gas.

The fact that this gas was stolen from the Palestinians did not seem to pose any moral issues for Sisi, whose dealings with Israel are kicking up a slow storm, of which he certainly is not oblivious.

Once Sisi snags a second term, he will continue playing up the role of saviour. At that point, he will strike while the iron is hot, and in the ecstasy of his phoney triumph, he will escalate the "war on terror" to justify a constitutional amendment that would potentially keep him in power ad infinitum.

The rubber-stamp parliament will naturally do his bidding, but even in the event that he starts facing any opposition, the next parliamentary elections are due in 2020, conveniently halfway through his second term, when any troublemakers can be removed.

Perhaps the most insidious feature of this political charade is that it hinges on buying time; time Sisi will spend tarnishing dissenting media, smearing and arresting critics, and reinforcing the military establishment's chokehold on power.

All that said, this unbridled despot ruling over the most important country in the region is neither a sign of confidence nor pragmatism - it is the wagging tail of a captured beast caught in a barbed web of his own lies, with no real endgame in sight, only a series of short-term gains that will merely delay his unquestionably imminent downfall.

Photo: Egyptian President Abdel Fattah Al Sisi rides a bicycle during a follow-up on training and rehabilitation programs at the Military Academy in Cairo, Egypt, on 19 February, 2018 (Reuters) 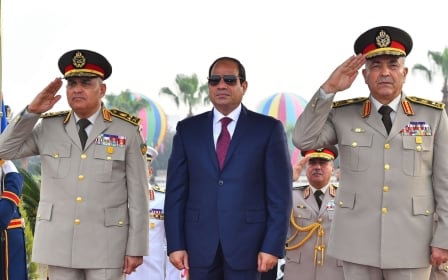 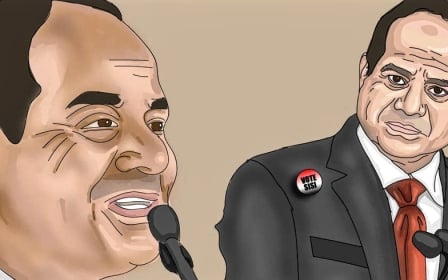