Oscar Rickett
There is no easy escape from the crises we are facing right now. And if there were, Joe Biden and the Democrats are unlikely to provide it There are moments when US President Donald Trump inadvertently captures the mood of the times.

On 26 October, at a rally in Allentown, Pennsylvania, Trump turned wistfully from his lectern to address a collection of vehicles somewhere offstage. "Nice trucks," he said. "You think I could hop into one of them and drive it away? I'd love to do it. Just drive the hell out of here. Just get the hell out of this. I had such a good life."

Trump is hardly alone in wanting to just get the hell out of this. Almost a year into a global pandemic, with a global recession underway, a climate crisis ravaging the planet, conflict across the world and levels of inequality spiralling, fantasies of escape are ever-present.

If only we could all just get into a nice truck and get the hell out of this.

That the former reality TV star is feeling this way is both not surprising and a little ironic. During his first campaign for president, I was one of a number of journalists who was told by sources who had worked with Trump that he didn’t really want to win the presidency, or even the Republican nomination, that it had started out as a ruse to boost his profile and had ended, calamitously, in him having to take on a job he knew he would hate at the expense of a life of semi-employed luxury and adulation.

American voters, who go to the polls on Tuesday, have spent the last four years fantasising about an escape from the Republican president

"This is more work than in my previous life,” he said after becoming president. “I thought it would be easier… I do miss my old life.” His desire to get away from it all is ironic given that Trump himself is the person many want relief from.

American voters, who go to the polls on Tuesday, have spent the last four years fantasising about an escape from the Republican president. They will be hoping that the polls hold up and that their candidate, Joe Biden, can deliver them from the horror their quasi-fascist ruler has visited upon them.

The problem with fantasies of escape, though, is that they are just that: fantasies. One of the defining arguments for those who oppose him is whether Trump represents an abhorrent and clear break from American norms, or whether his presidency has simply been an extreme iteration of American power, with its long history of racism and injustice.

It could be that, as the Boston-based journalist Luke O’Neil, author of Welcome to Hell World, put it to me, Trump is “not quite the final form of the American right, but the most fully realised version yet. It’s only his incompetence and idiocy that prevents him from achieving what the next guy in waiting will try.”

There will be a further test of how much of a break from the norm Trump is come election day. The president has suggested that this election is going to be "rigged" and that he might not accept the result.

Biden represents an imagined return to a world before Trump, a world when American power at home and abroad was more discreetly exercised

Longstanding allies like Roger Stone, the veteran Republican operative whose prison sentence on felony charges was commuted by the president, were reported to have said that Trump should bring in martial law if the result went against him.

When I asked Stone to comment on this, he told me, in reference to a report in the Guardian: “That is not even remotely what I said. It's a wilful misrepresentation of what I did say.”

Nevertheless, the idea, which would previously have been considered unthinkable, has been raised, and there is widespread worry that votes will be thrown out or not counted in key battleground states like Pennsylvania. Anyone who remembers the disputed Florida count at the 2000 election between Al Gore and George W Bush knows that the Republican Party is no stranger to these kinds of machinations. If the result goes against him, the president could incite a truly terrifying amount of violence.

Those who see Biden as a saviour, a man who can deliver us from the evil of Trump, see the current president as an abomination, something unseen before in the life of the nation.

If Trump is defeated, Americans who place their faith in CNN, the New York Times and the Democratic Party may come to find that while the president’s removal from office affords them some peace for some time, their nation will remain racked with conflict and injustice, and that this time, those things cannot be swept under the carpet.

There are key questions of class and race here. For Trump’s wealthy detractors, Biden could be just the ticket: a placeholder president who doesn’t offend liberal sensibilities by shouting about Mexicans and Muslims, and who doesn’t remind them that, once upon a time, he was just the kind of celebrity they indulged and endorsed.

As Barack Obama’s vice president, Biden represents an imagined return to a world before Trump, a world when American power at home and abroad was more discreetly exercised.

For the current president’s less fortunate detractors, there will be no escape from a country – and a world – that is becoming a harder and harder place to live in. Racial injustice in the US did not begin with Trump, it is as old as the country itself, and the Black Lives Matter movement began under a black president, Obama, and a black attorney general, Eric Holder.

Racial injustice in the US did not begin with Trump, it is as old as the country itself

The mode of advancement favoured by the liberal establishment and the Democratic Party has turned out to simply involve lifting up a few, at the expense of many.

This applies to class as much as it does to race. Anyone familiar with the persuasive work of authors like Thomas Frank knows there are good reasons to say the Democratic Party all but abandoned America’s working class a long time ago.

In clearly favouring Biden over Bernie Sanders, the party’s powerbrokers have shown that they are not particularly interested in systemic change.

Fascism or anything else

The shortcomings of Biden the candidate are clear. He is, as one of his longstanding employee put it, a man who "disappoints everyone". He seems confused and unable to think on his feet. His policy and voting records are chequered. The rest doesn’t need to be restated. The shortcomings of his party are probably more significant. US election: A Biden presidency would not promote democracy in the Middle East
Read More »

That will become the urgent question if Biden wins. For now, it’s enough to say that when faced with a choice between fascism and anything else, you take anything else. Trump’s domestic and foreign policy has divided and immiserated his nation and many others.

The usual victims of American policy – Muslims, people of colour, the Palestinians, the working class – have been hit that much harder by Trump’s time in office. His removal – and the removal of the cabal of advisers he has around him – is needed.

But there is no easy escape from the world as it is right now. And if there were, Joe Biden and the Democrats are unlikely to provide it.

Oscar Rickett is a journalist who has written and worked for Middle East Eye, VICE, The Guardian, openDemocracy, the BBC, Channel 4, Africa Confidential and various others. 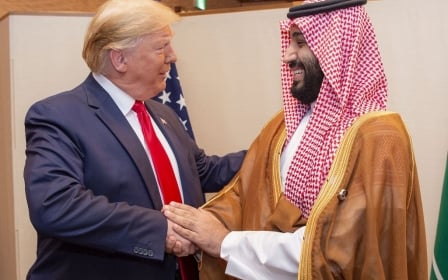 US Elections 2020
US election: Mohammed bin Salman braces for the loss of a key ally
Madawi al-Rasheed 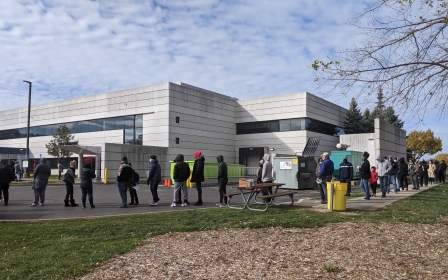 US Elections 2020
In the heart of Arab America, voters are anxious as election goes down to wire